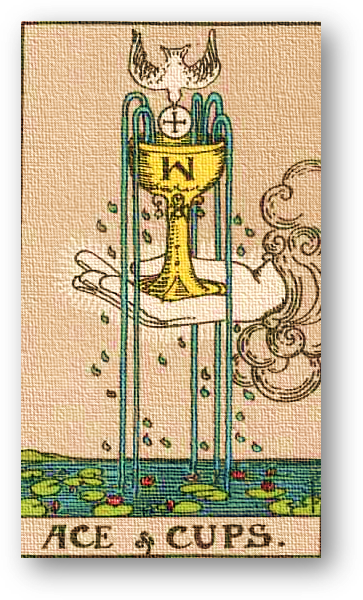 Tarot cards began as a game, later becoming symbols of magic and used to predict the future.  A typical tarot deck has four suits: cups, swords, batons, and coins.  The ace is the first card in the deck.  The Ace of Cups card is full of symbols.  As a whole, the card symbolizes spirituality, beginnings, opportunities, emotions, intensity, and abundance.

Tarot began as a normal card game in medieval Italy.  The often beautiful and elaborate cards reflected its popularity as a game among the elite. Over time, starting around the 18th Century, tarot cards began to be associated with the occult, the supernatural, and the simply magical.  A tarot deck was split into Major Arcana (greater secrets) and Minor Arcana (lesser secrets) cards.  The ace of cups is a Minor Arcana.

A normal deck of cards has four suits: diamonds, hearts, clubs, and spades.  A typical tarot deck also has four suits: cups, swords, batons, and coins.  There are various varieties of tarot decks. For instance, some decks have wands and magic coin-like objects instead of batons and coins.

Each suit or symbol on a playing card or tarot card represents a class of people. Cups cards, originally also known as goblet or chalice cards, were traditionally associated with the clergy. A chalice is a fancy cup used by a priest to drink wine, symbolizing the blood of Christ. The cup card symbolizes the clergy as well as religious and spiritual things in general. The cup is thought by some to actually be the Holy Grail, the cup that Jesus used at the Last Supper. The search for the Holy Grail inspired many medieval tales, long before Indiana Jones was involved. The cloud, dove, and hand (of God) on the cup card also have religious symbolism.

The Ace of Cups and New Beginnings

The ace in a regular deck of cards can be both a “one” and the highest card.  The tarot deck is arraigned ace to king.  The ace is the first card in the tarot deck. The ace of cups symbolizes beginnings.  If you are dealt an ace of cups in a tarot card reading, it often symbolizes that you are ready to start something new.  It symbolizes a new beginning, an opportunity, and something that you should seize when given the chance to do so. The ace of cups symbolizes the end of one thing, such as bad luck or your current relationship or job, and the beginning of something new.  Both an opportunity and a bit of a warning. Tarot cards are tricky, however, and maybe it means not a completely new thing, but taking your current relationship or situation to a new level.  Such as going out and buying a wedding ring.

The cup card is related to the heart card in a normal deck of cards. A cup card is a very emotionally laden card.  Cups cards are associated with love, empathy, compassion, and/or happiness.  As the first cup card, the ace of cups is strongly emotional. The ace of cups is a symbol of strong positive emotions.  It is about feeling good about yourself, being open to other people (all types of relationships),  and feeling full of joy and satisfaction. The ace of cups is also about intensity and abundance in general.

Five streams of water flow out of the cup.  There is some debate over what exactly each stream of water represents.  The Ace of Cups is overall closely associated with water. Water is used to clean.  The water here symbolizes cleansing, including water used to baptize, to clean away sins.  Water symbolizes getting rid of bad things and becoming pure again.  Water also symbolizes life, energy, and abundance.

The drops of water also have special significance.  They are in the shape of the Hebrew letter  Yod, which is the divine spark of creation, the world to come, and a symbol of completeness. The drops of water also symbolize magical “dew,” which can transfer all that it touches. Droplets of water here symbolize the power and possibility of change. INTERESTED IN THE SYMBOLISM OF RAIN? CHECK OUT THIS ARTICLE.

Water lilies are floating on the water.  Lilies symbolize purity, the Virgin Mary, and the life-giving water believed to be following out of the cup. Some believe lotus flowers are floating in the water.  Lotus is a special symbol in Hinduism and Buddhism, representing beauty, grace, and all-around perfection.

Ace of Cups and the Planet of Mercury

The Ace of Cups also symbolizes the planet of Mercury. The chemical symbol of mercury (Hg) comes from the Greek words meaning “water-silver,” which is also known as “quicksilver.”  The upside-down “M” on many Ace of Cups cards very well might also stand for “Mercury.”

Zodiac Signs Associated with the Ace of Cups

The Ace of Cups is associated with the Zodiac signs of Cancer, Scorpio, and Pisces.  These are the water signs.  “Cancer” here comes from the Latin word meaning “crab.”  The scorpion is also a water animal.  And, as well known by someone closely related to this blog, Pisces means “fish.”

Position of the Card

Tarot reading requires skill and knowledge of the intricacies of the symbolism involved. If the Ace of Cups is facing up, it is a positive sign.  Does the card symbolize new beginnings?  Buy that wedding wing.  Go all in with the new job and relationship. An Ace of Cups facing down can have a somewhat different meaning.  You will have a new beginning, but maybe there is a problem with your current situation.  A card face down suggests you should carefully examine your situation.  It might not be worth staying on the same path.

There is a rock band (The Ace of Cups) named after the card.  This is a powerful name.  The ace of cups is full of symbolism, including good beginnings.  Of what exactly? Only time will tell.