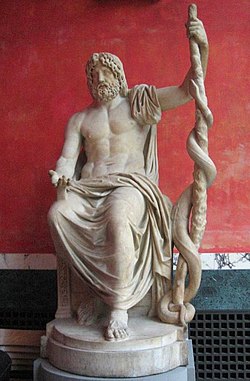 The rod of Asclepius is an ancient Greek symbol that has become an internationally recognized symbol of medicine. It consists of a snake [worm?] slithering around a wooden stick. Each aspect of the symbol has many meanings. Later, the Rod of Asclepius was also combined with a six-point star to represent emergency medical services.

Asclepius was the son of the Greek god Apollo whose other children, such as daughters Hygieia and Panacea, are also health symbols.

Apollo was one of the elite gods, associated with the sun, knowledge, prophecy, medicine, and beauty.  There are various stories about Ascelepius’ birth, including how his mother was killed when Apollo found out she was unfaithful.  Some stories edit out his mom (who was a mere mortal) and say that Asclepius was born without a woman involved at all.  Hmmm.

Asclepius learned about medicine.  Again, there are different stories about how he came to be such an expert.  His dad and the centaur (half-man, half-horse) Chiron appear to have been involved.  Asclepius is mentioned in the Iliad, the great Greek adventure story, as a great healer.

The original Hippocratic Oath, said by physicians, included a reference to Asclepius.

Temples honoring Asclepius became the first hospitals. These shrines were known as an “Asclepeion.”   Snakes supposedly favored such locations, serving as protectors.

Yes, snakes.  Snakes are very associated with our pal Asclepius, including stories that argue that they helped pass along medical knowledge.  Snakes shed their skins, symbolizing fertility, long life, and rebirth. Their venom is both poisonous and provides medicinal value.

Snakes, including a snake actually slithering around his staff, became a symbol of Asclepius.  The “Aesculapian snake” (a non-venomous European snake variety) was named in his honor.

Could it be a worm on the Rod of Ascelpius rather than a snake?

The long association of snakes with medicine makes it logical that a god of medicine or even just a famous healer would be associated with snakes.  This would include the ability to have power over life and death, even if the snake named after him is one of the safe ones.

Nonetheless, some theorize that the animal on the Rod of Ascelpius might be a worm, which is somewhat less impressive.  There was a type of infectious worm that physicians removed from a person’s body by cutting the skin and the worm twisted onto a stick.  (Again, ewww).

Why is there a rod (or staff)?

A “rod” in this case is a wooden staff, a type of walking stick, which was also a sign of authority.  An average physician, making house calls, would be recognized by their rod or staff.

Moses, the great biblical hero who was played by Charlton Heston, is often portrayed with his staff.  The Bible also includes a story about Moses which shows how various stories about snakes and rods were spread around in the ancient world:

The Star of Life, a U.S.-protected trademark, is a symbol used to recognize emergency medical services (EMS).  The symbol features the Rod of Asclepius in the center of a six-point star that represents different aspects of the EMS system:

The Star of Life is used by emergency personnel around the world, though some places use other symbols alongside it or as alternatives.  For instance, some Middle Eastern countries favor a crescent symbol, the six-point star that’s also associated with Judaism.

The Rod of Asclepius became a leading medical symbol.

It is an example of a symbol that combines various meanings into a united whole. The rod is a symbol of authority while snakes were associated with immortality, healing, and power over life and death.   Combined, we have a symbol of the medical profession.