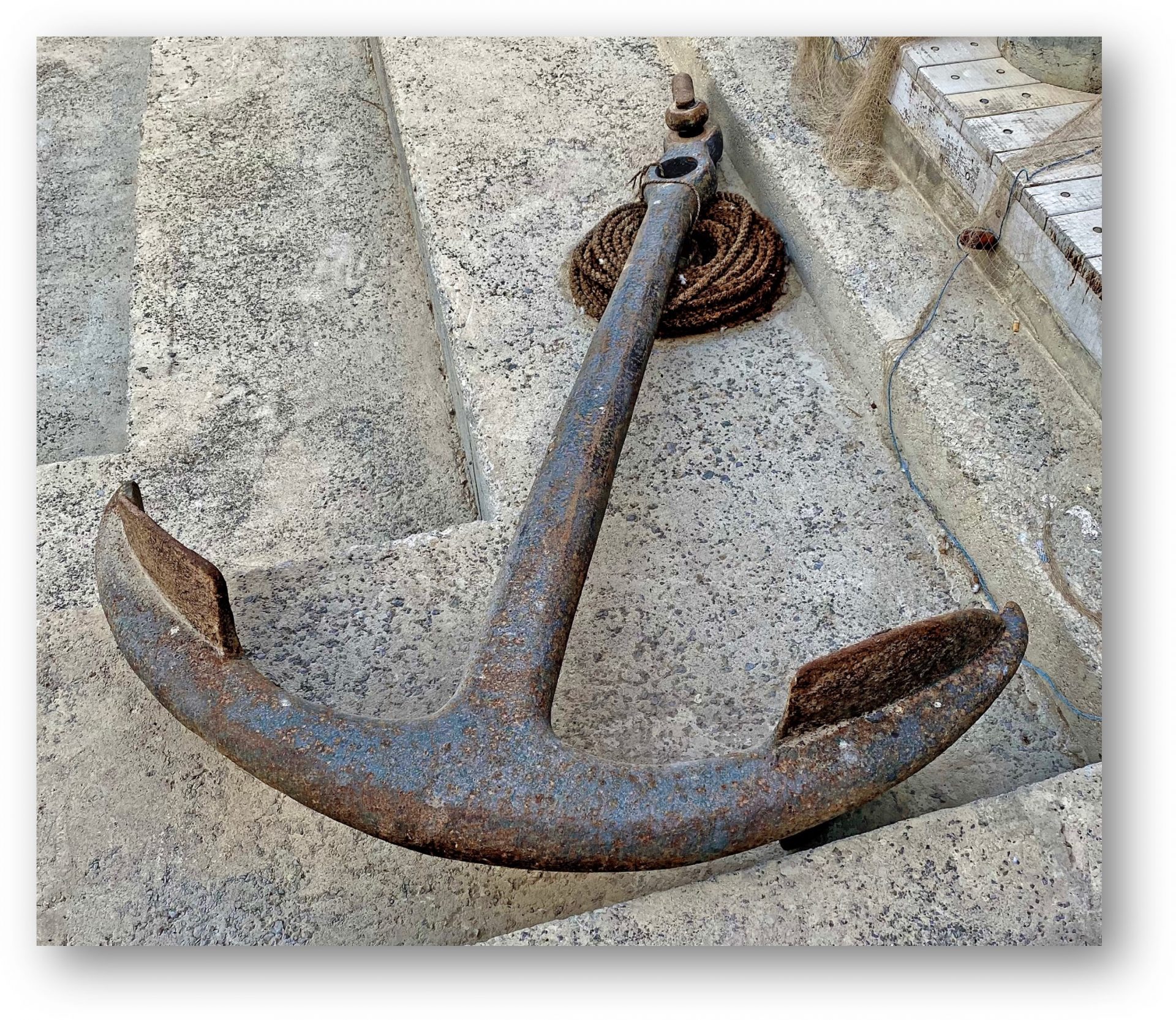 An anchor, from the Greek word meaning “to bend,” is a device (usually made of metal) to secure a ship in place.  It turns out that anchors also have a lot of symbolism.

Farewell to foreign shores, we sail at break of day, of day

Through our last night ashore, drink to the foam

Until we meet again, here’s wishing you a happy voyage home

“Anchors Aweigh” is the U.S. Navy Song.  And, the most familiar symbolic meaning of an anchor, including as a tattoo on Popeye, the Sailor Man, is for ships, sailing, and sailors.  Anchors also symbolize gods, such as Neptune, associated with the seas.

It is common for symbols to be parts representing the whole. Hands, for instance, can represent a whole person.  Anchors represent ships and all things related to them.

Anchors can even represent island nations, such as the United Kingdom represented by a woman holding a large anchor, since the English people are known historically for their great navy.

They symbolize strong ties or bonds to a person or place, which are hard to upend.  You are firmly secure, like an anchor on the ocean floor.

Anchors also symbolize endurance.  Anchors symbolize you are steady and will stay on your path.  You might have to deal with many difficulties, but in the middle of it all, you have a certain firm handle on things.  An anchor is holding you in place, preventing you from going off course.

Anchors can also symbolize the promise of a happy life.  Safe, secure, and very promising.

If you want a symbolic gift for a loved one who is starting a new endeavor, an anchor it perfect!

What Does An Anchor Mean In A Relationship?

A possible gift to someone you can rely on to be there for you is an anchor chain. Why?  Because an anchor is something that holds a ship in place.  It ensures that it will not go away.

Life is full of risks and things that threaten to knock you down.  Sometimes, you need something to make sure you are secure.  Someone strong to hold you in place.

In a relationship, if someone says “you are my anchor,” it means they keep you grounded.  They are someone you can rely on.

Anchors can be people you have faith in.  They are good charms for loved ones.

Anchors therefore also symbolize hope and a promise for the future.  The future can be scary. But, if you have a firm assurance that things will go okay, it is much less so.  This allows you to have the courage that a new start, such as a new business or journey will be okay.

“Anchors aweigh” is a saying used at the start of a journey.  A journey in some ways involves lifting anchor.  But, an anchor also can symbolize a safe journey.

God did this so that, by two unchangeable things in which it is impossible for God to lie, we who have fled to take hold of the hope set before us may be greatly encouraged. We have this hope as an anchor for the soul, firm and secure.

The anchor’s symbolism of hope and stability was also adapted by Christianity.  An “anchored cross,” an anchor drawn to look like a cross, became a familiar Christian symbol.

Jesus was sometimes symbolized as an anchor.  Christians believe Jesus died for our sins and belief in him leads to eternal life.

Jesus is our anchor, the person who protects us, his strong love is like the heavy anchor that holds a ship in place.

Jesus and Christianity have a lot of sea-related symbolism.  For instance, the apostles were mostly fishermen, and the fish became a symbol of Christianity. An anchor fit in well.

Anchors in ancient times were sometimes used to drown bad people.  A sort of early form of “cement shoes.”  A broken anchor, including the chain being cut, also can symbolize premature death.  An anchor on a gravestone often means the person buried is a sailor.

Saint Clement was martyred by being tied to an anchor and thrown into the sea.  The anchor became associated with St. Clement as well as all those oppressed.

Early Christian tombs, known as catacombs, often had an anchor symbol. The symbol represented both Christianity and specifically belief in the afterlife.  The final journey.

Anchors often symbolize nautical things and can also signify good things like endurance.  They also can symbolize death and the afterlife.  So, anchors are not always good news.

Anchors can symbolize negative things.  An anchor can weigh you down in a bad way.  Someone who holds you back from what you want to do, who is a dead weight, can be an “anchor.”

Anchors have a lot of symbolism.  We just touched upon the most familiar uses.

The anchor symbol is made up of a cross and two “flukes” that point in different directions.  This is another symbol of a journey.  The cross has many meanings, especially among Christians.

The two flukes welded together can symbolize a couple together for life.  The flukes also are in the shape of a crescent, which has many meanings, including the moon and feminity.

The anchor was an important discovery in ancient times, a basic piece of technology that grew more complex and secure over the centuries.  And, became very rich in symbolism.