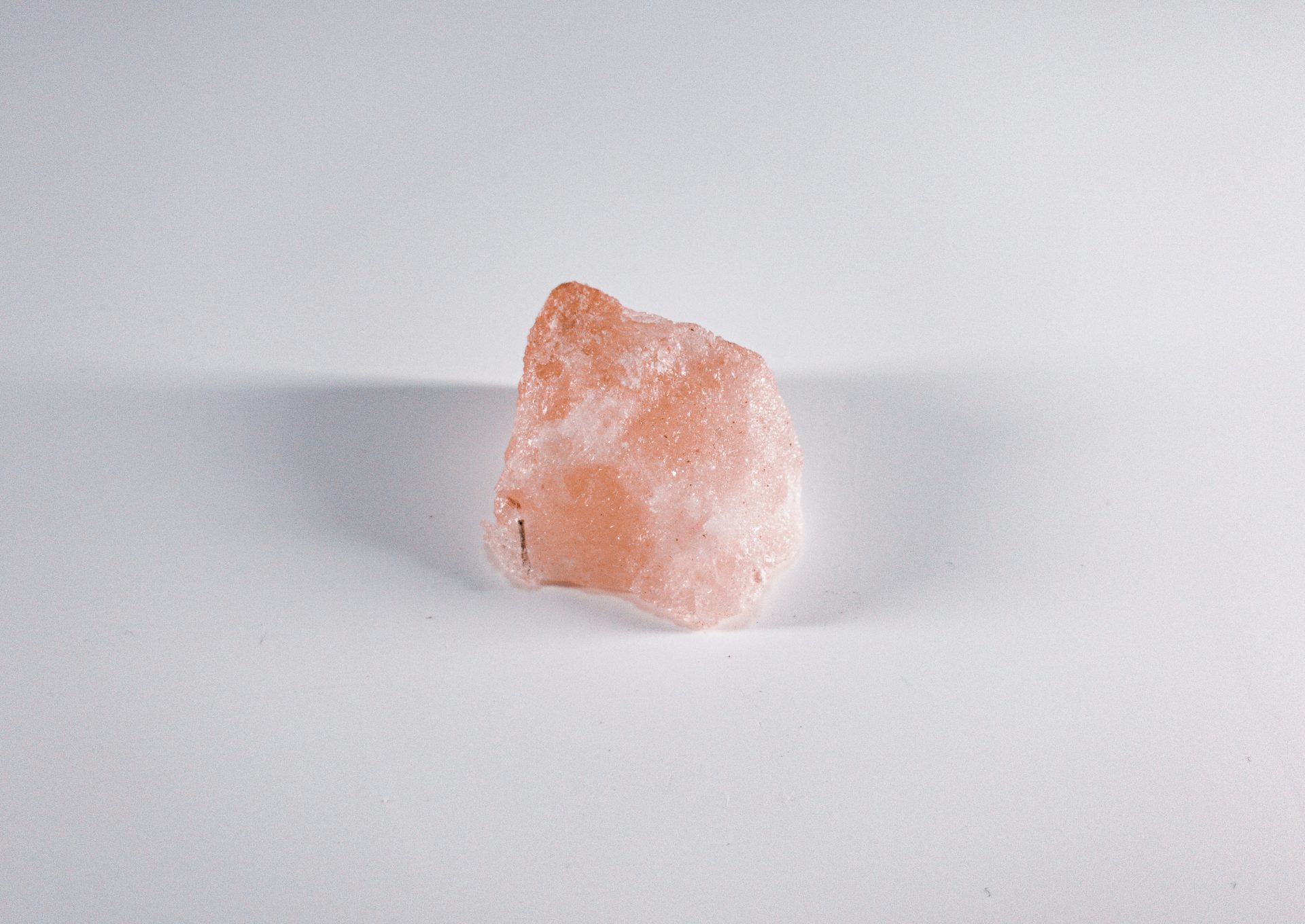 Rose quartz is a pinkish crystalline mineral. Its beauty from early on made it popular for decoration. Red quartz also was believed to have magical qualities, including promoting love and peaceful relationships. Crystals, including red quartz, continue to be a popular health symbol.  Red quartz especially is believed to promote love and self-health.

Rose quartz is a mineral and has a pinkish color.

It has a “vitreous luster,” which is a fancy way of saying it looks like glass.  Some rose quartz are “star stones,” having mineral qualities that give the appearance of a star, especially when viewed in the right light.  This is called “asterism” from the Greek word for “star.”

“Quartz” originated as a German word that means “hard.”  Rose quartz has no apparent connection to Rose on Golden Girls or any necklaces worn by Rose in the movie Titanic.

Quartz is also a crystal.

Crystals are scientifically quite interesting.  Ice, salt, graphite (in pencils; do people still use pencils?) all are forms of crystal.  Their atoms are extremely well organized, showing crystals are not just beautiful to the naked eye.  They are beautiful molecularly as well.

This special molecular structure produces minerals that are quite useful.  Quartz itself is used in electronics, clocks, and in pressure gauges.

Rose Quartz Through The Ages

It is likely that the first humans used rose quartz as an early form of decoration.

Rose quartz beads have been found as far back as 7000 BCE  in Mesopotamia, currently modern-day Iraq.  Egyptians used it to make face masks believed to clear the complexion and prevent wrinkles.  It was said that the Egyptian goddess Isis used rose quartz to retain her beauty.

Ancient Romans used rose quartz as a seal as a sign of ownership.  Rose quartz was a popular decorative item in Asian cultures, including China, India, and Tibet, as well.

People early on also considered rose quartz to have special magical qualities.  Ancient Roman, Egyptian, and Greek civilizations all used them as talismans, objects considered to be good luck charms.  They do look magical.  Greeks believed crystals were a form of ice (“krýstallos”).

Crystals, including rose quartz, were also believed to have healing qualities since ancient times.  In the Middle Ages, medical practitioners continued to use quartz in their healing potions. Whole books, called lapidaries, were written about the medical uses of each stone.  This tradition has caused rose quartz to become a symbol of health.

Early Native American civilizations also believed rose quartz was a “love stone,” one that helped relieve anger and disappointment.  The very pink color of rose quartz made it seem heart-like.

One Greek myth told of Zeus, the king of the gods, saving Aprophite’s lover. Adonis was injured, his blood changing white quartz into its current rose color.  This is why, so goes the tale, why rose quartz is now a symbol of reconciliation in love.

Rose quartz is said to be a powerful talisman to ensure a good relationship.  You are to wear it around your neck or put it underneath your bed.  (Sounds a bit “R” rated.) This will attract and protect true love.  Rose quartz is also a good way to bind broken hearts and fix troubled relationships.  It is said that Cupid himself brought rose quartz to Earth.

Crystals today are still believed by many to have healing qualities.

Crystals are a familiar part of “New Age” beliefs, a range of groups arising in the 1970s and 1980s particularly concerned with personal spiritual betterment.   But, as we can see, the belief in crystals goes back a long time.  Rose quartz is included in this health mix.

Crystals are believed to be an important means to interact with your body’s energy field (chakra).  If you truly believe, scientific studies have shown that crystals might have certain positive effects.  This includes both by touching your body with crystals or by mediating with them.  Science or pseudo-science, crystals have special health symbolism.

Rose quartz particularly would be important for the heart chakra, necessary for emotional health.  It is valuable for both personal well being and compassion for others.  Some help with rituals and instructions for use can be found here.

Rose quartz, in my view, is quite pretty.  I can see how it can not only be seen as a beautiful decorative stone, but a symbol of love and emotional health.  Its pinkish hue is like the color of a heart and has a special feminine quality which also can symbolize love and compassion.

I am not sure about all the alleged powers of crystals, but rose quartz would make a nice charm. And, as long as you realize you need more than some pretty stones for a good relationship, using them to help your love life and relationships, in general, is fine with me.