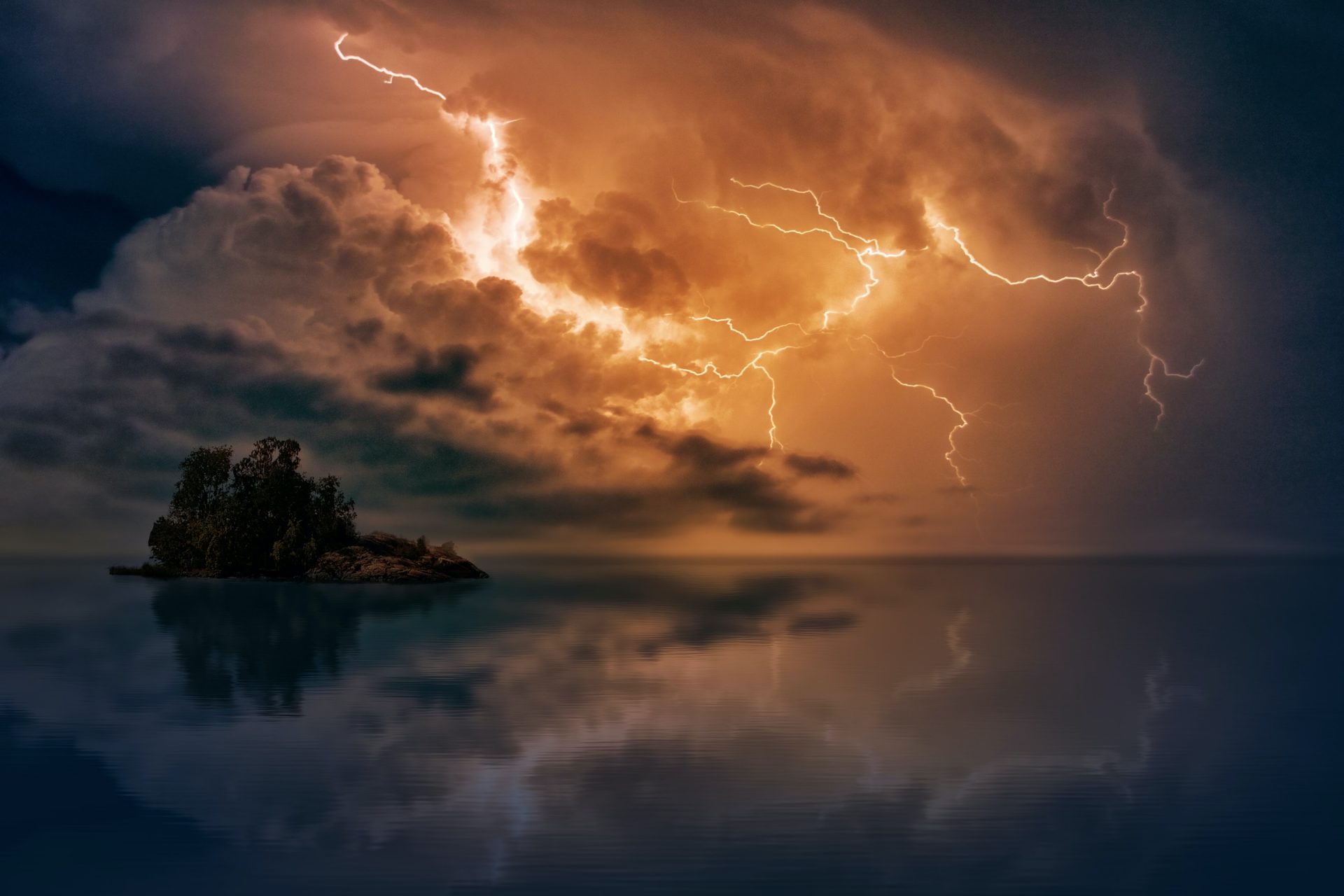 Lightning is a flash of electricity from the sky.  It symbolizes dark and stormy nights, setting a creepy mood.  Lightning strikes symbolize power and judgment from the gods.  A bolt in the blue is a sudden, surprising event or insight. A lightning round provides a quick set of answers. White lightning is strong liquor or any dangerous addiction.

Lightning is a bright flash of electricity produced by a thunderstorm.  It has a distinctive sound and appearance.  Just look:

Lightning is often used to set a certain mood, especially in films and old-fashioned gothic novels of the type that had creepy castles, evil nobles, and had lots of build-ups full of detail.

There is an old saying by those who swear they are telling the truth that “if I’m lying, let lightning strike me dead.”  About 50 people die by lightning strike in the U.S. each year.  Huh.

The king of the Greek gods, Zeus, was known for his thunderbolts, or lightning strikes.  They were his fearful weapon, including used as a punishment.  Lightning was part of one of the ten plagues of Egypt (if sort of an also ran; hail was the main attraction).  Symbols of divine power.

Harm by natural acts are still called “acts of gods,” even by lawyers.  And, traditionally, it has been believed that there was a reason for it all.  Including that the person harmed is guilty of something.   This idea is symbolically retained by the “may lightning strike me dead” saying.

The idea that lightning will strike you dead for lying or maybe doing something much worse is not only a saying, it’s consistent with the idea that there is ultimately some sort of universal justice in the world.  If not obtained on earth, ultimate punishment will be obtained from above.

Bolt From The Blue

A “bolt from the blue” is a sudden event, including a sudden insight (of the sort also symbolized by a light bulb over one’s head), which is quite unexpected.

This is more lightning symbolism.  What is involved here is a lightning bolt that strikes suddenly out of the blue sky.  Lightning usually comes when the sky is dark and gloomy. Like this surprising event or personal realization, a bolt from the blue is a surprising event.

A lightning strike can be dangerous.  A bolt from the blue often has a more positive result.

A popular saying is that “lightning doesn’t strike twice.”

The idea comes from the false idea that a lightning strike never strikes the same place twice.  Something unexpected happens.  Don’t expect it to happen again!

The saying is often sort of “good news” after a bad event.  Something bad happens, but do not worry, “lightning doesn’t strike the same place twice.”  Until that same store is robbed again!

How Is Lightning Related To Game Shows?

Monica and Rachel wanted to prove that Chandler and Joey did not know more about them than the women knew about the guys.  So, they had a contest with ten questions to see who knew best.

They wound up with a tie after Rachel goofed on the name on Chandler’s TV Guide subscription.  It was time for tiebreaker lightning round!  Yet the weather was nice out.

A “lightning round” is a standard on game shows where you have a limited amount of time to answer a bunch of questions.  Or, part of an interview or debate when the participants are asked a bunch of questions quickly and they answer with short quick answers.  This would provide those watching, listening, or reading a chance to obtain a bunch of information.

What is White Lightning?

White Lightning is a brand of English cider that is known for having a high amount of alcohol at a lower price.  White Lightning also is a type of (often illegal) colorless home-brewed whiskey known for its high alcohol content and impurities.  Drinking it is like being struck by lightning.

No promises, no guarantees

When you come down here

You’re already on your knees

You want to ride White Lightnin’

“White Lighting” is also a song by Def Leppard, dedicated to the deceased guitar player Steve Clark, since he was always running around the stage.  That is at least the “G” rated version.  Clark died of alcohol poisoning, and the song describes his alcohol and drug addiction.

What Are Some Other Beliefs About Lightning?

Gods using the power of lightning is a belief throughout many religions and cultures. Zeus influenced the Roman god Jupiter.  The being many simply think of “God,” believed by Jews, Christians, and Muslims is associated with lightning strikes. As is the Norse god Thor.

Cherokees believe fire came from lightning striking a sycamore tree.  Algonquian mythology speaks of “Thunder Beings” that cause thunder and lightning, which are closely associated with birds.  They can be dangerous, but also sometimes save humans from monsters.

Lightning is a symbol with some pizzazz.  It comes down from the sky in a flash, brightening up the sky.  No wonder people associate lightning with gods (or superheroes) and their power and judgment.  It is both cool and scary.  And, if lightning is involved with sudden insights, hopefully it will strike twice.  I will welcome all the help I can get writing these symbolism entries.