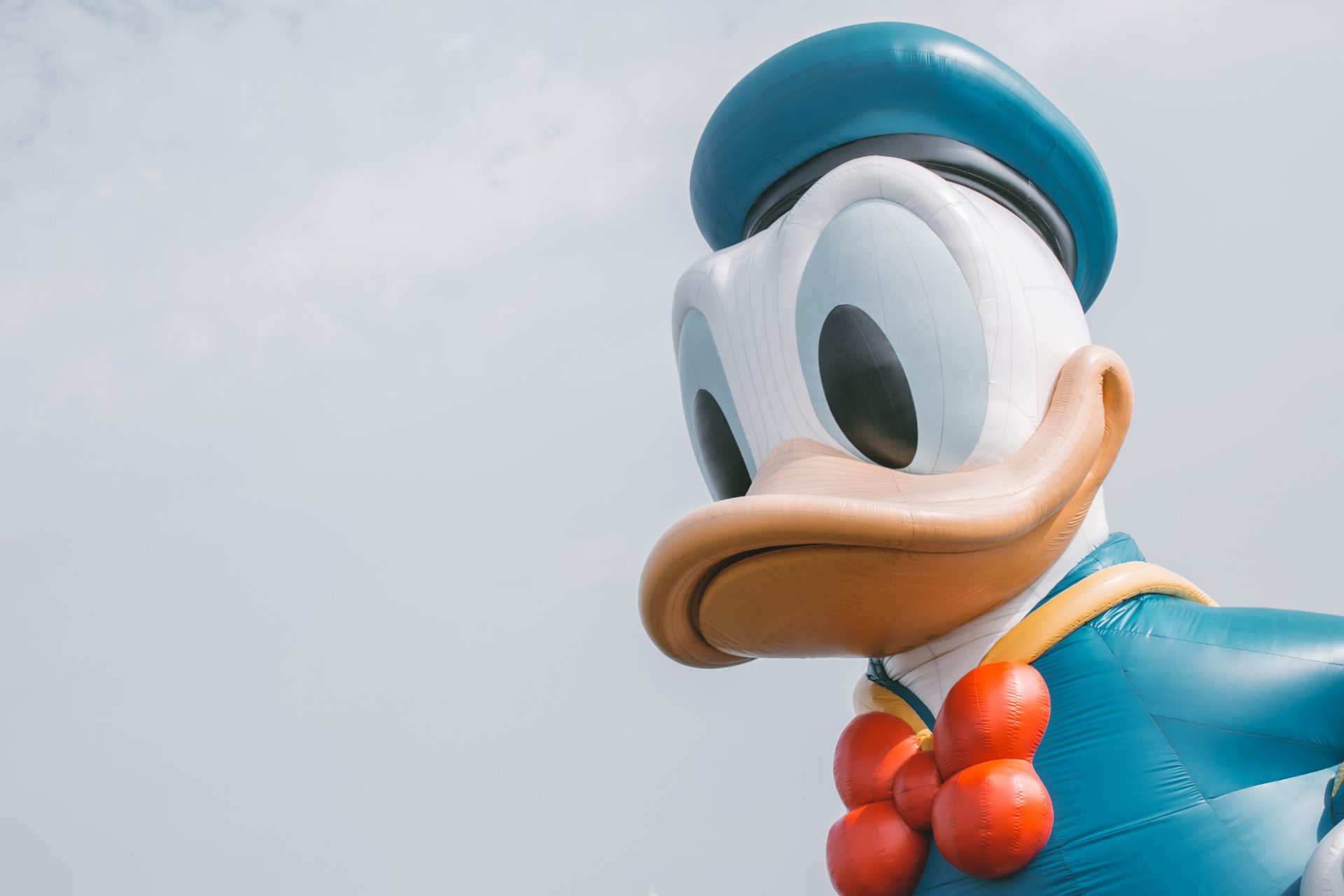 Donald Fauntleroy Duck is a favorite Disney character with a telltale squeaky voice. Donald is easily angered, often his own worst enemy because the more frustrated he became, the more people made fun of him. He symbolizes the need for self-restraint.  Donald retained a sense of optimism and  flawed every-man character that’s very relatable to children and adults.  Donald is not only a source of fun, but a lesson to viewers.

Both wacky ducks are entertaining while also being symbolic. In fact, many enjoy them, particularly because what they stand for is relatable.  Let’s take a look, no subtitles are necessary.

Donald Fauntleroy Duck was introduced in 1934 in the film The Wise Little Hen.

His first name was supposedly inspired by a famous “duck” the cricketer Donald Bradman obtained while Walt Disney was creating the character.  Donald’s middle name matches the type of sailor outfit he wore, typical of a fancy little boy.

Donald has lived in various places, but a standard home for Donald and his friends is Duckburg.  The rich Scrooge McDuck is his uncle.  Donald’s nephews are Huey, Dewey, and Louie.  Donald’s love interest was originally Donna Duck, but soon it was Daisy Duck.

The signature Disney character, Mickey Mouse was a happy-go-lucky fellow.  Donald from his first appearance with Mickey would be much more prone to anger, which along with his hard-to-understand “duck voice” are his most well-known qualities.

These qualities amused many and Donald soon became a very popular character.

Donald Duck in his first character setting appearance (Orphan’s Benefit) is part of a show in honor of orphans.  Donald Duck starts off well, but soon is interrupted, much to his annoyance.

Donald loses his temper and has to be shoved off the stage.  Later, Donald seems to be able to perform without difficulty but is interrupted yet again.  He comically accepts defeat.

Donald’s telltale “Aw Phooey” when he is frustrated matches what many viewers, especially children, feel.  Disney characters are beloved by people of all ages, but children are the primary audience for cartoons.   Donald symbolizes the frustration many children experience.

Viewers who are amused at Donald’s antics might also be amused at a child being angry when frustrated.  Both can be cute figures of fun though deep down how funny is it really?  The child and Donald both are frustrated and unhappy.

Donald’s anger is usually not in any way totally unjustified.  In the first film, he was being heckled.  Donald’s anger arises from his sense of justice.

Donald Duck appears to be a crested duck, who ironically are known for their pleasant nature.  Donald, however, often starts off in a pleasant mood.  Deep down, he has a sense of optimism that things will go well.  Donald is not merely a gloomy Eeyore type character.

Donald’s anger reminds me of the typical child who has a strong sense of right and wrong, often saying something “is not fair!”  Donald Duck provides a lesson about controlling your anger, even if you are not unreasonably angry at something.  If not, like Donald, you will make things worse.

Donald’s aggravation not only makes him a source of fun, but makes him something of an every-man’s character.  He was a bit of a braggart and show-off, which could get him in trouble.  Nonetheless, deep down, Donald was a decent sort.  A symbol of a decent flawed individual.

Donald’s appeal as an everyman character was so clear that when the U.S. government used Donald to promote war bonds (“Donald’s Decision”)  during WWII.

Donald’s aggravation and frustration also symbolizes the life of many viewers, not just children. Life seems unfair, even if you continue to try to retain your optimism.

Donald’s speech impediment, like that of various other animated characters, is very relatable to many children. Children often are aggravated because they cannot fully express themselves to adults. And, then, some have additional problems, including speech impediments, learning disabilities, and other issues.  A problem of self-expression is often a universal quality.

FOR MORE ABOUT THE SYMBOLISM OF DISNEY CHARACTERS CHECK OUT THIS ARTICLE.

Donald is not a hopeless character.  He continuously is shown to have the potential for improvement.

Donald sometimes is able to win in the end during his adventures.  He often is called lazy, but is willing to make an effort to exercise.  Donald over the years served in the military.

At one point, Donald goes to anger management therapy, and learns that his voice is a major reason why he gets so frustrated.  He fears that people do not understand him and fear is often related to anger.  (“What Ever Happened to Donald Duck?”)

READ ABOUT THE SYMBOLISM OF OTHER BELOVED DISNEY CHARACTERS:

Donald Duck’s birthday is said to be on Friday 13th, to symbolize his continual bad luck.  And, Donald does symbolize bad luck, which can be funny, especially if it happens to someone else.  Nonetheless, a popular character like Donald is likely to be a much more complicated sort than just someone who is forever living under a dark cloud.  And, so he is.