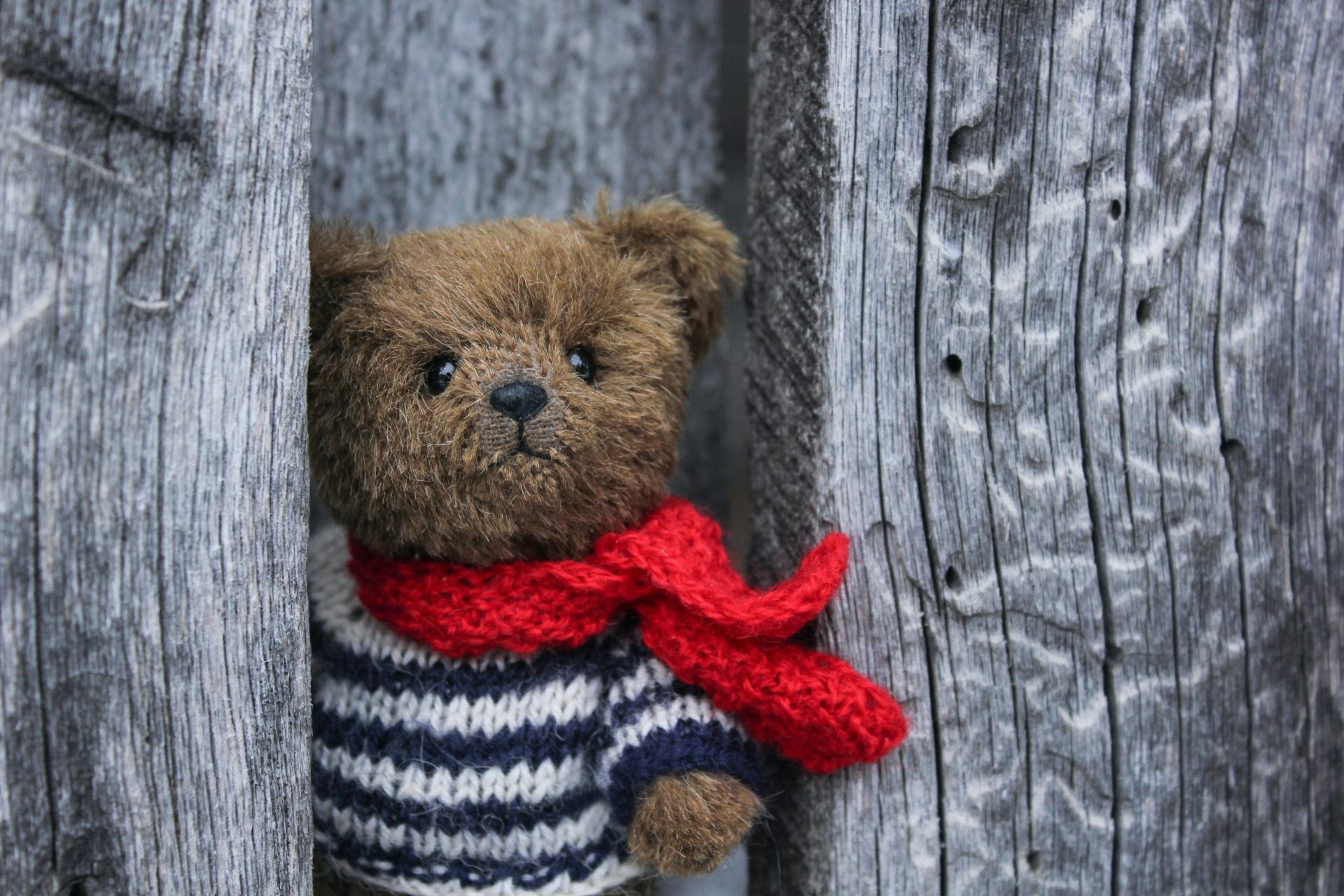 The ubiquitous teddy bear. No one is too old or young to own one. They make everyone smile. These (usually fuzzy) friends have come to reflect warmth and comfort, calming and familiar.

Teddy bears are cute stuffed animals. Big and cuddly men are referred to as teddy bears. They are beloved children’s characters. One “Ted” is even a wisecracking teddy bear that comes to life.  Teddy bears can symbolize many things though usually something comforting.

The origin of the “teddy bear” is less pleasant than your average cute stuffed animal.

Theodore Roosevelt was out hunting.  An adult brown bear was captured and he was offered the chance to kill it.   Roosevelt felt this unsportsmanlike.  The bear should be “put out of its misery,” but no respectable hunter would think the bear a proper target.

This became the subject of a political cartoon.  Since Roosevelt was hunting while down South to help with a border dispute, the cartoon used a play on words — Roosevelt “drew the line” at shooting a poor bear.  The bear became smaller and more cuddly as the cartoon was reprinted.

A small bear seemed like a perfect idea for a children’s toy.  Roosevelt allowed his name to be used.  “Teddy bear.”  And, it became a popular toy.  Roosevelt even used a bear as a mascot during his presidential re-election bid in 1904.

Bears were growing in popularity in Europe as well.  Bears were in many traditional stories such as Goldilocks and the Three Bears.  A cute miniature version became a popular toy in England and Germany.  The popularity of the Teddy Bear increased international sales.

Theodore Roosevelt was very concerned about nature and supported the development of a national park system.  Bears in general symbolize nature.  Yogi the Bear himself is still stealing picnic baskets in a national park.

Teddy bears do not seem like the sort of bear that would hang out in nature.  Those bears often are kind of scary.  Why are teddy bears so popular?  What do they symbolize?

They are soft and cuddly.  Very huggable.  They are perfect for children (and adults) to hold on to as they sleep or need comfort.   Imagine a little boy sucking his thumb, holding his “Teddy.”

Teddy bears are basically baby bears.  They are the “Boo Boo” to the adult bears’ “Yogi Bear.”

They symbolize childhood.  They are cute like little children can be (when they aren’t being too naughty).   Teddy bears bring to mind children or a bit of childhood when owned by adults.

Teddy bears are cuddly.  They are soft and plump.

There are a range of stuffed animals out there and maybe being cuddly is part of a stuffie’s very purpose in life.  But, teddy bears seem just a bit more cuddly than most.  They are perfect to hold close and squeeze tight.

Teddy bears being cuddly also is the source of the slang term for big cuddly men.  These men might look scary.  But, deep down, they are soft inside.  They are just “teddy bears.”

INTERESTED IN THE SYMBOLISM OF THE ALSO-VERY-CUTE KOALA? CHECK OUT THE ARTICLE HERE.

A child’s “teddy” might be their best friend.  Teddy bears are trustworthy companions.  They will not let you down.  They are nice and gentle types.

Teddy bears in storybooks and movies tend to have such qualities.  The movie Ted is about a teddy bear that comes to life.  He is a raunchy bear, which makes sense since he is voiced by the creator of the t.v. show Family Guy.  But, “Ted” is still a loyal friend to the main character.

What is not to love about a teddy bear?  And, we have a natural inclination to care for, to love children and things that we associate with children.

Girls and women also often are associated with cuddly things.  Perhaps, men (and some women!) give them as gifts since they want to be hugged like the owners of teddy bears hug their beloved teddies!

They are often given to those who are sick or have other reasons to be sad.  Teddy bears are very comforting.  People give them to those they think need something soft and reassuring.  Something to hug while someone gets through bad times.

The first teddy bears quickly inspired stories.  What child does not like to think up stories about their stuffed animals?  The result was many beloved characters.

Later on, many enjoyed the Care Bears.  And, Teddy Ruxpin, which originally amused children by talking by means of ancient devices known as “cassette recorders.”  It was later a t.v. series.

Teddy bears arose from an act of kindness.  A big macho hunter like Theodore Roosevelt, hero of the Rough Riders, President of the United States.  And, he didn’t want to harm a bear?

It was a prime subject for cartoons, especially with Teddy Roosevelt himself already a favorite subject of caricature.  And, it worked even better if it was a cute childish looking bear.