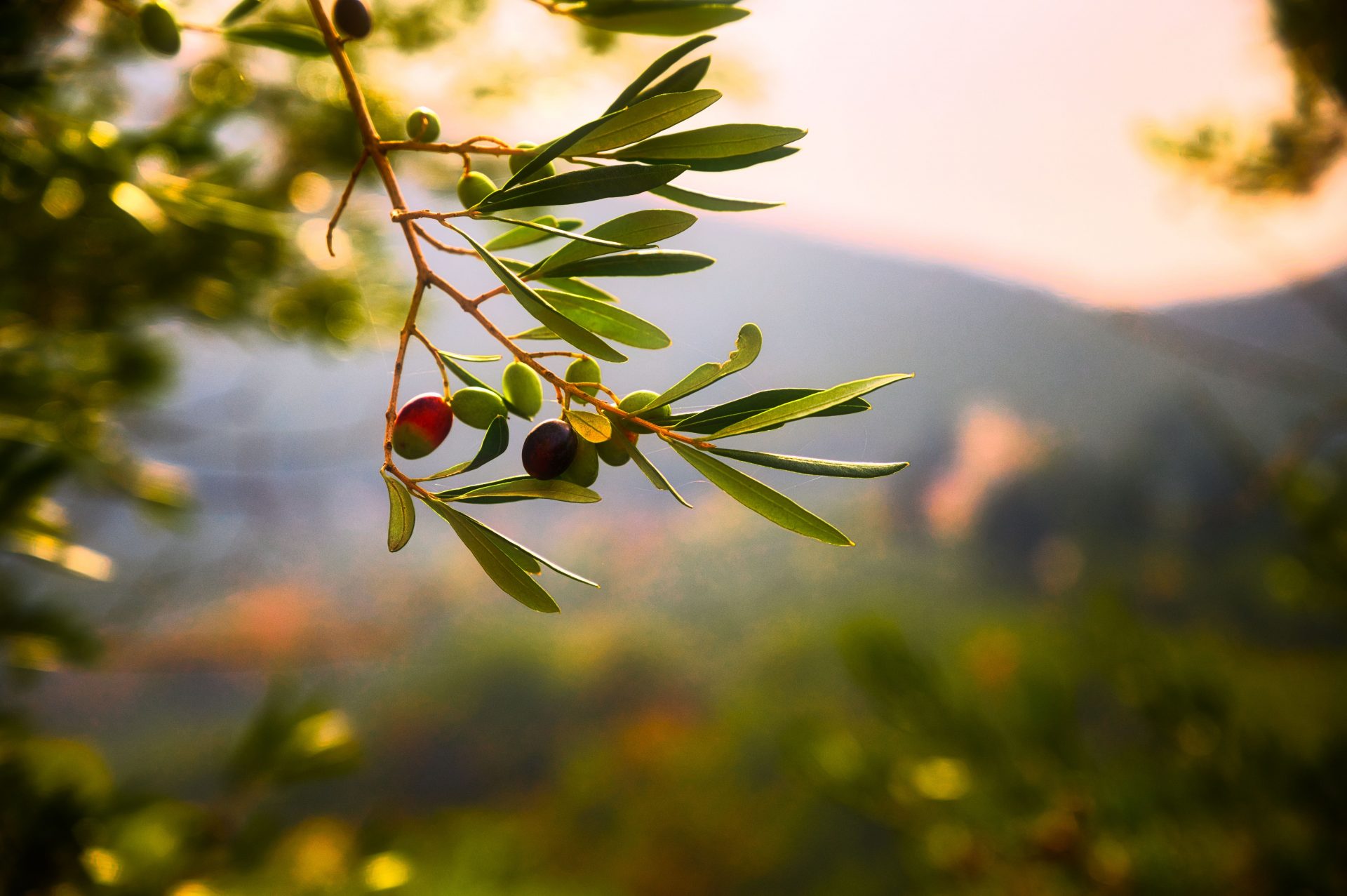 Olive trees are evergreens.  They have been an important part of human culture for thousands of years.  Olives symbolize the Mediterranean, food and drink, family, and celebrations.  The “olive branch” is an offer of peace.  Olive trees play a key role in religious ceremonies. They were used in ancient times as medicine. Popeye’s Olive Oyl is an example of olive trees being found in many fictional accounts.

Olive trees are very familiar symbols in a range of ways.

From eating at the Olive Garden and drinking a martini, to the “olive branch”, to olive trees as important symbols for many people, olive trees are a familiar cultural icon.  Let us look at the symbolism of olive trees and all of their parts.  Hopefully, it will be a tasty meal.

Olives grow in shrubs and trees.

Olives are evergreens, which grow year around, like Christmas trees.

These trees are one of the oldest cultivated (grown by humans) trees in the world.

The olive tree is native to Mediterranean Europe, Asia, and Africa.  Nonetheless, they can be grown most anywhere in the world, as long as you protect them from the cold.

Olives, used for food and oil, are the fruit of the olive tree.

The wood of the olive tree is also used for furniture, culinary items (spoons and the like), and other decorative items.  The wood is prized for being firm and resistant to decay.

Olive Trees As Symbols Of Place

Trees of many kinds are symbolic, and the olive tree is no exception. The waterway between Europe and North Africa is the Mediterranean Sea, which also gives its name to the general area.

If you look on a map, the country that looks like a foot kicking a ball (Italy) and Greece (the country next door) are major countries in the Mediterranean. The Holy Land, honored by three religions, also is part of this general region.

Olive trees played an important role in the cultures in this area for more than seven thousand years.  Olives and olive oil symbolize the Mediterranean and Middle East.

Very associated with Greeks and Romans, olives are also symbols of Middle Eastern people, including the Palestinians.  Olive trees later also spread to other parts of the world, especially California, which became a major olive growing region.  Olive trees can symbolize them as well.

The primary thing olive trees are used for is food and oil.  Olives, which come in green and black forms, are not only tasty but nutritious.  Olive oil is a popular cooking oil.

An olive is particularly associated with the martini, a stylish alcoholic cocktail.  Olives symbolize a business lunch as well as a night at a bar or a party with friends.

And, of course there is the Olive Garden, a chain Italian restaurant.  For many cultures, olives are symbols of family and home.  Olives symbolize cooking a big meal for your family, including if you are an Irish-Italian grandmother, to reference someone I know.

The “olive branch” is a symbol of peace, including a sign of peaceful intent during negotiations.

The “Olive Branch Petition” was an attempt by the American colonies, even though the American Revolution already had begun, to obtain peace.  The colonists were “presenting the olive branch,” showing they were willing to negotiate peace if their grievances were met.

The British turned them down, driving the push for independence. Afterwards, the eagle on the Great Seal of the United States clutched an olive branch and arrows, symbolizing the new nation (eagle) will live in peace (olive branch), but is willing to defend its liberty (the arrows).

The origins of the “olive branch” was likely the fact that olive trees were ancient symbols of peace and plenty.  People, therefore, used the olive branch to show their peaceful intent.

Olive branches are a symbol of abundance and glory.  An olive leaf crown, a wreath, was placed on the heads of winners of Olympic games in Ancient Greece.

Olive leaves were traditionally given to winners of various contents. The celebratory and peaceful nature of olive wreaths are also shown by their use in weddings.

Olives were not only used for food, but were an important salve for injuries. The warriors in the stories of Homer would have had their injuries treated with olive oil.

The importance of olives for medicine shows how olive trees are also symbols of health and well-being.  A basic part of the Mediterranean diet, olives and their oil are fundamental components in their recipes.

The religions of the Middle East used the familiar when looking for symbols and items to use for their rituals.  Olive trees, including olive oil symbolizing purity, were a familiar sight here.

An early example of the importance of olive trees in religious imagery is the fact the dove that showed Noah the great flood was over had an olive leaf in its mouth.  (Genesis 8:11)

The Islamic holy book, the Quran also has many references to the olive tree.  They are believed to be a gift from heaven, a sign of Allah’s greatness and abundance.

The importance of olive trees to culture, particularly as a symbol of certain groups of people, makes them useful symbols in fictional accounts.

Olive trees can be a sign of conflict as well, including the destruction of olive trees of Palestinians in the Middle East.

The most famous usage of olives probably is Olive Oyl, who first came in the comics before Popeye.  She is but one member of her family named after different kinds of oil.

I personally am not a fan of the martini, but think olive bread and olive oil are both tasty treats.  A nearby bakery used to sell tasty pieces of olive bread.  Darn if they do not these days.  Oh well.  There are various other ways I can obtain a taste of the Mediterranean.