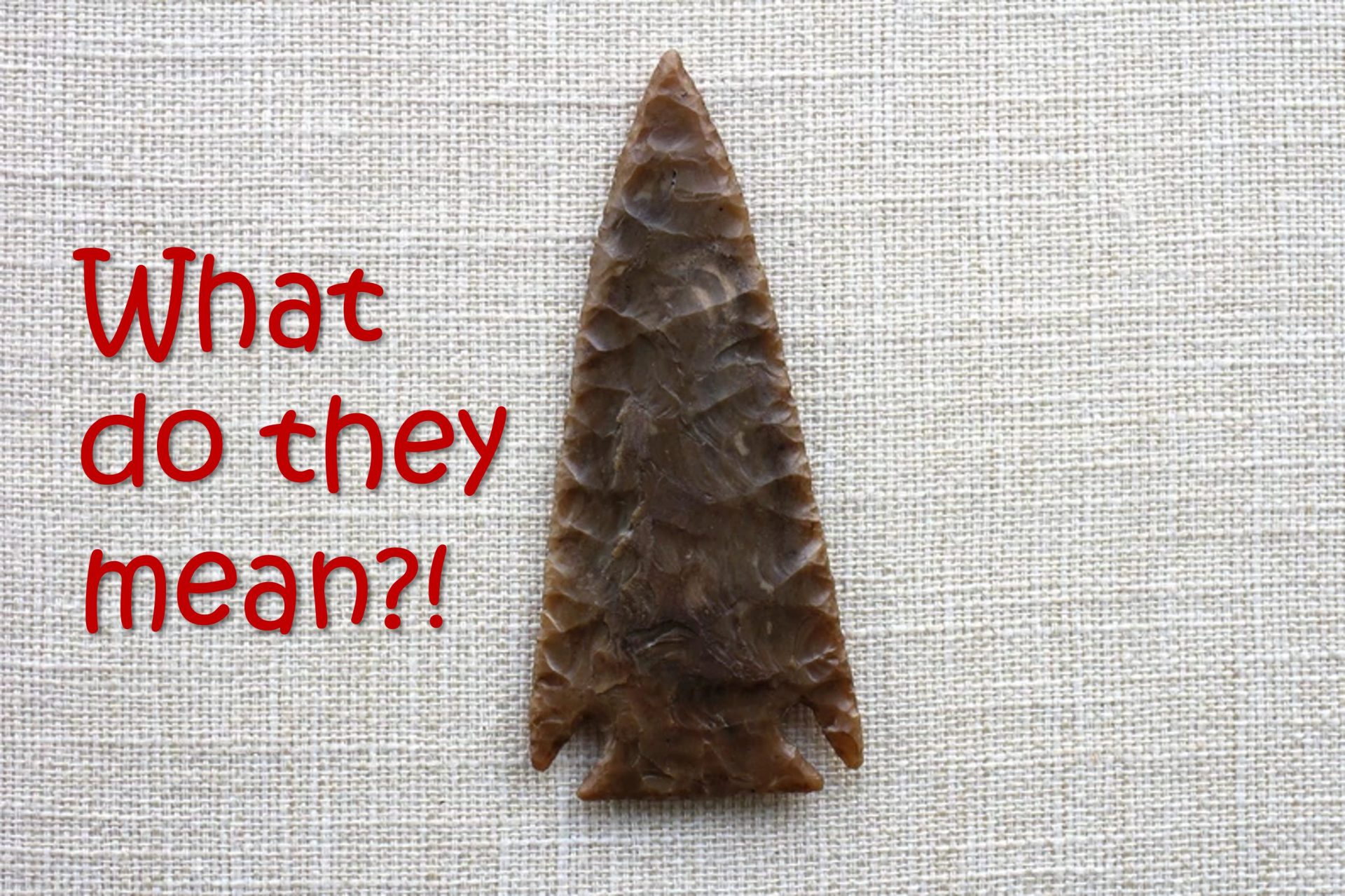 Arrowheads are the sharpened tips of arrows. They were an early form of human technology.  Arrowheads symbolize the distant past and primitive worlds.  Arrowheads are very important Native American symbols. They symbolize bravery, protection, and survival. Arrowheads also have special religious symbolism. They also symbolize direction, pointing us the way to our destination. Arrowheads are popular talismans and tattoos.

Arrowheads are the sharpened tips of arrows.  Arrowheads were originally made of such things as bone and stone.  They allowed humans to hunt much larger animals, serving as an early long-range deadly weapon.   Arrowheads also were used in warfare between humans.

Artifacts are items that provide an understanding of how people lived in the past.  An important artifact of our distant past, including before written history, is the arrowhead.

Arrowheads were a tool and technology of early humans.  They are a basic symbol of the first humans as well as the distant past.  Arrowheads are also symbols of primitive tribes, including to contrast them to modern day people when we see both in some movie.

Arrowheads symbolize archaeology, the study of the past.  Imagine someone finding an old arrowhead on their property. Or, professional archaeologists doing a dig, and finding arrowheads that are used to understand some long gone civilization.

Arrowheads might look alike to many of us.  They are actually quite diverse, including what is used to make them and how they are made.  Such things are important to learn about the people who use them, including when they lived and the status of their development.

Arrows are important symbols to Native Americans. An arrow can symbolize an individual person, clan, or tribe.  This symbolism comes in various forms.

Crossed arrows symbolize two people crossing paths and coming together peacefully. They are a popular Native American symbol, where the arrows can represent both two people and two different clans or tribes coming together in peace and friendship.

Arrowheads: Many Uses, Lots of Symbolism

Arrows and arrowheads have many uses, explaining why they were so important to early residents of the Americas, including the Vikings.

Arrowheads are a means to obtain food, show your skill in hunting and warfare, and protect yourself and your tribe.  They symbolize all of those things as well as the qualities involved in doing them.  Arrowheads symbolize bravery, heroism, achievement, and at times simple survival.

And, arrowheads symbolize the artistic and other talents necessary to make and use them.

Arrowheads continue to be worn as talismans, good luck charms, and are believed to have special power even when worn on a necklace.  Arrowhead tattoos are also popular.

Arrowheads have a special religious significance, symbols of the power and security they bring.

They are a symbol of the past and the continued survival and success of the tribe.  Many Native Americans believe arrowheads retain special energy and power.

Arrowheads can also be unlucky or evil.  They are used to harm and kill.  Arrowheads might be found on battlegrounds or in graves.  Might be best to stay away from them.

The arrowhead itself is often most familiar to us as a symbol to point the way somewhere.  A direction symbol.  It is found on signs on the floor to point the way, and on edits on a term paper.

The arrowhead is a symbol of traveling and going long distances.  An arrow shoots through the air, the arrowhead leading the way.

An arrowhead can symbolize someone who is traveling or has traveled a long way.  It points the way, allowing us to obtain our goals.

The fleur-de-lis (“lily”) is a popular symbol used to represent many groups, including European royalty.  It was eventually adopted by the Boy Scouts and is found on their uniform.

The elitist background of the symbol led many to prefer to call it an “arrowhead.”  This caused some problems because many people associate arrowheads with military pursuits.

The lily in that respect seems to be a more peaceful and spiritual symbol.

The arrowhead, however, has many meanings.  The symbolism of directions, including the four sides of a compass, would be quite suitable for the Boy Scouts organization.

“Arrowhead” is the name of a range of animals and plants, places, and naval ships.

The military connotation we have already seen shows that “arrowhead” is a logical name for military-related stuff.  The writer Herman Melville (Moby Dick) named his home “Arrowhead” because he found arrowheads buried in the fields.

Fans of the Kansas City Chiefs might associate “arrowheads” with their football team, who play at Arrowhead Stadium.  The name here has a clear Native American connotation.

Arrows are a sign of the past, including Westerns and Robin Hood movies.  Many would only see arrows and arrowheads if they took part in archery.

Arrowheads still retain many symbolic meanings.  They bring forth strong images in our minds as a good symbol does.  In many ways, arrowheads help point the way in that respect.