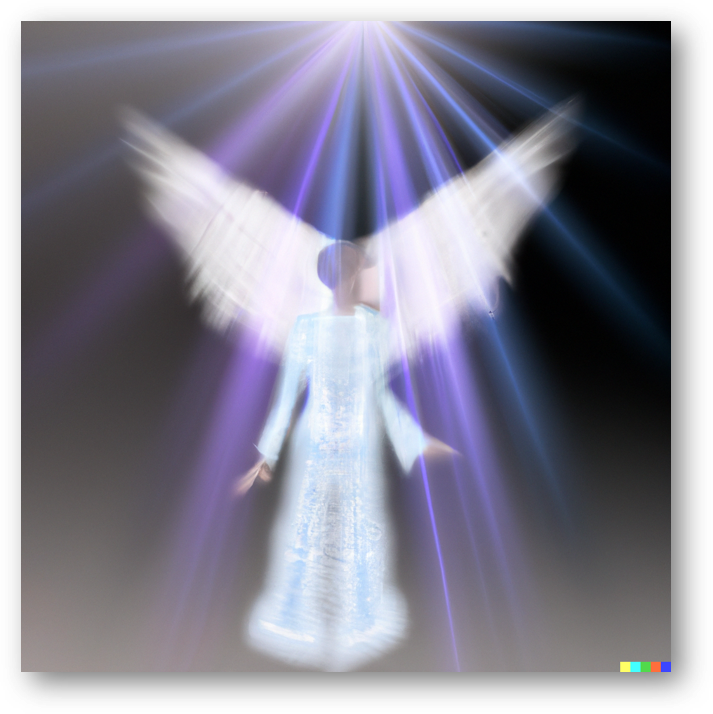 Angels are messengers of God.  God is so separate from the rest of all creation that a special go-between is felt to be necessary.  Angels symbolize goodness, purity, innocence, and faith. Angels also symbolize strength, security, and salvation. Angels are popular symbols of spirituality, even for those without a religion. Angel wings are the basic symbol of angels and all their special qualities.

I am an angel. A messenger sent by God, and an answer to Henry’s prayer.

Different people will have different answers if asked about who first comes to mind when the subject of angels arises.

Maybe, Clarence from It’s A Wonderful Life will be your choice, especially if it is Christmas-time.  Many have favorites from the Bible, including Gabriel or maybe Lucifer, if they have a dark soul.

For many, it was Monica, who revealed herself each week to the people she was sent to help. Monica’s name even means “to advise” and “truth.”

The word “angel” comes from Latin and Greek meaning “messenger, envoy, one that announces.”

God in philosophy and religion is so superior and separate from the rest of creation that people felt that direct connections to the profane world are impossible.

Special moments exist when God reveals himself (God is often seen as masculine), including in the minds of Christians when Jesus preached.  But, this is rare, and it was felt some sort of go-between was necessary.

Angels serve this role. Angels visited the patriarchs of Israel. An angel informed Mary that she was chosen to conceive Jesus.

Muhammed, the final and greatest prophet of Islam, was visited by an angel, who revealed the beginnings of the holy Qu’ran.

And, many believe angels visit them up until today, delivering certain messages from God.  Angels symbolize a special message that can change your life.  “Angels” might not be actual heavenly creatures.  They can be human messengers as well.

Angels provide a way to experience God and goodness.  People who do not have a strong religion, and do not belong to a particular religious sect like Catholicism, often believe in angels.  Angels are popular for those who say “I am not religious, but I am spiritual.”

Angels are traditionally understood to be spiritual beings from God.  The opposite of angels would be demons.  Lucifer aka Satan is a “fallen angel.”

A certain very strong drug is known as “angel dust” because it is said to cause you to be “really high,” like an angel in heaven.

Angels symbolize goodness and light.  Angels are sometimes referred to as stars or “morning stars,” which are “in the heavens,” in the sky.

Angels are pure of heart and totally innocent.  People praise those who do good by saying “you are an angel” and call people they love and adore “my angel.”

The innocence of children leads many to call them “angels.”  At least until their devilish side shows up.

The positive qualities of angels, including their connection with white light, even led to a toilet paper (Angel Soft) being named after them!

“Archangels” are the angels of the highest rank.  John Travolta played Michael in a movie by that name.  Michael is an archangel that does battle.

Angels are often protectors.  They intervene in our lives when we need help, looking over us without us being aware.  They give us strength and security.  Angels provide guidance.

The protection and connection to goodness and God also lead angels to be closely connected to faith.  Angels symbolize faith, a certain secure knowledge, that things will be okay.

Angels themselves are portrayed in a variety of ways.

When Monica reveals herself, a heavenly light surrounds her.  Angels are often symbolized as some type of light. Angels are believed not to have any concrete form, being pure spirits.  Angels might also be actual people, their angelic side on the inside.

A basic symbol of angels, however, is wings.  The advertising tagline for Red Bull, an energy drink, is that Red Bull “gives you wings” (energy).  Wings are a logical appendage for a heavenly messenger.  Mercury, the messenger of the gods, is often shown with wings.

An angel’s wings make an otherwise normal-looking person or creature look angel-like.  They give the angel power and speed.  Angel wings symbolize their ability to quickly arrive to help you and give you a message from God.  Wings show angels are not of this earth but from the sky.

When an “angel gets their wings,” it means they are truly messengers of God.  They have met the test, and proven themselves worthy of their special role.

Wings are a special symbol of their role and special nature.  Angel wings are in a special way what makes an angel truly an angel.

Angels are favorite characters in stories and films. They are good presents, including figurines, charms on jewelry, and for your favorite reader, a bunch of books.

Angels have many symbolic meanings, particularly as someone who looks over you and tells you a special message.  In many stories, angels actually are jealous of humans, which I personally think is a bit silly.  It might be that the angels are being negatively infected by being in human form.

I also am not quite sure about Touched By An Angel.  I think it is nice that they have an angel that prepares people who are dying.  No.  My issue is that if angels do exist, they often are not so open about revealing themselves.  They are tricky that way.