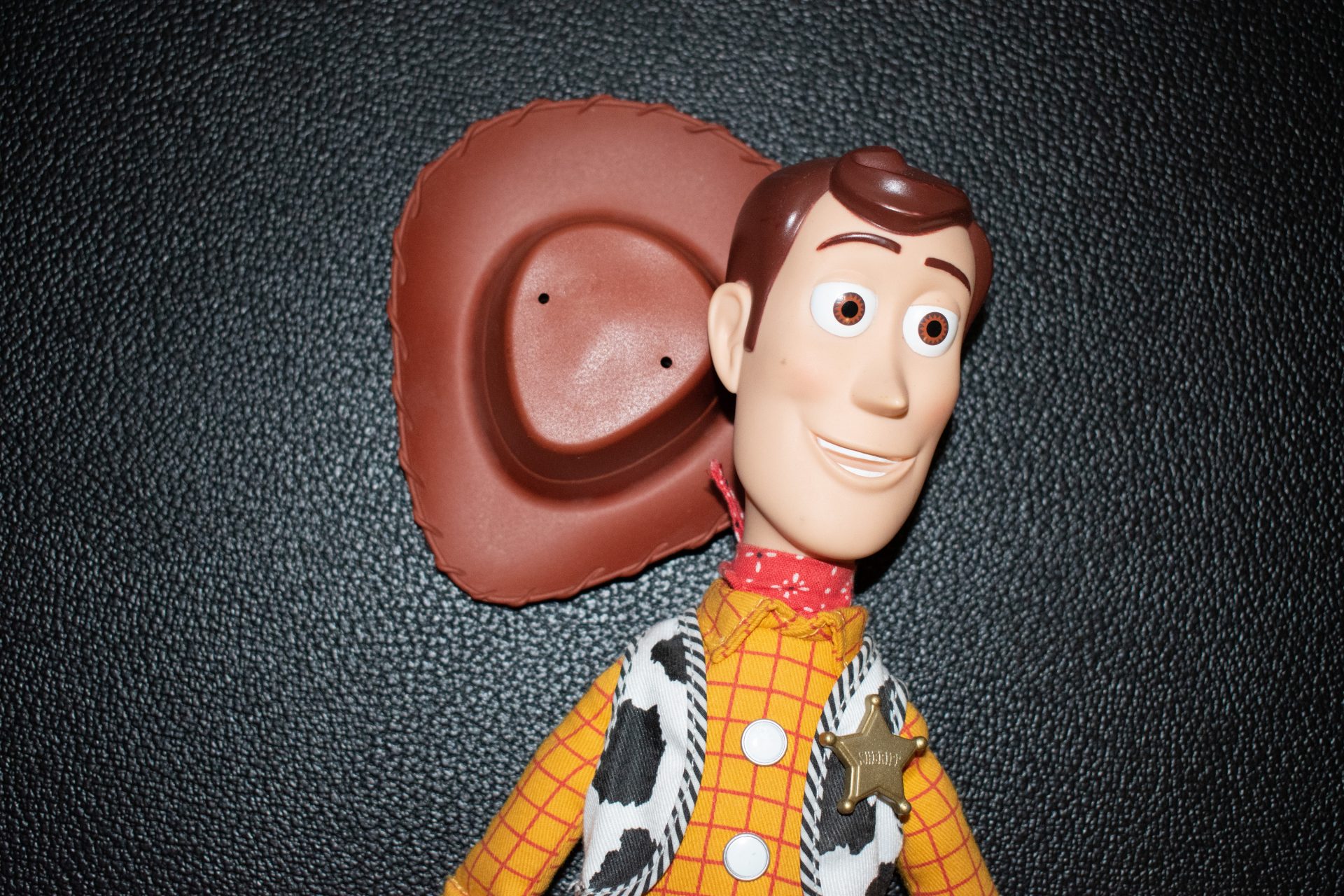 Toy Story is a beloved film franchise with Woody, the old-fashioned cowboy, as the clear leader through it all.  Woody Pride symbolizes imagination, boyhood, adapting to change, and basic goodness like his voice actor, Tom Hanks. Woody is the leader of the toys and symbolizes what good leadership entails, including recognizing one’s limitations.

Many adults grew up watching the films (1995 to the Present) and/or watching their own children grow up like the character Andy did in films.  A catalyst in the first film, Buzz Lightyear, was popular enough to result in his own spin-offs, including a 2022 film.

Toy Story’s conceit (or is it?) is that children’s toys have their own lives when the children are away.  Andy Davis, a young boy at the beginning of the series, has many toys.

The clear leader, however, is Woody the sheriff.  Woody is both a major driver of the plots of the films and is also a major focus of our emotional response.  We often see things through his eyes.  We watch Andy grow up, but Woody’s own development is also a major theme of the films.

Sheriff Woody Pride, an old-fashioned cowboy, is Andy’s favorite toy at the beginning of the movie Toy Story.  Bo Peep is his girlfriend.  He later is owned by Bonnie.  Woody eventually goes off on his own with Bo Peep to help lost toys find their owners.

Woody Pride had his own 1950s television show named Woody’s Roundup. His 1950s old-fashioned style is symbolized by his basic pull toy (with a string that you pull to hear his stock phrases*) construction.  Woody has no bells or whistles.

Woody was named after a black actor named Woody Strode, who was a well known athlete and character actor, including in such films as Sergeant Rutledge.

A basic thing the whole Toy Story franchise symbolizes is the power of imagination, especially of children.  Toys are tools for children to imagine wondrous things.

They have a range of adventures.  And, they are a way for children to prepare at their own level for adult roles.  Animals use play for such purposes, including a cat with a toy mouse.

Woody and the other toys have their own personalities and adventures.  Children often imagine that their toys have separate lives.  Toys can seem quite real.  Woody having a life when Andy is not around symbolizes the imagined lives many children create for their toys.

Toys are not just for children.  We all have our toys, including flashy cars, and other things.  Children, however, particularly play with toys.  Toy Story symbolizes childhood and growing up.

Andy starts out as a little boy with a bunch of toys.  But, he particularly favors certain “boyish” toys, the focus of the first Toy Story basically two types of cowboy (old fashioned and space cowboy).  Woody is a symbol of Andy’s childhood.

When Andy is grown up, Woody is the one toy he finds hardest to give up.  And, when he does so, it is a symbol that Andy is truly an adult.  Woody and the other toys eventually have new homes, including with Bonnie, but she does not play with him much.

The toys always symbolize childhood, but Woody has special symbolism as a boy’s toy.

Woody was the star of a 1950s Western. Westerns provide a somewhat mystical view of American history, including teaching basic values of right and wrong.

Woody himself is a symbol of a traditional male authority figure.  Woody is voiced by Tom Hanks, who is an actor with a safe dad-like vibe though he has played some sketchy characters too.  Woody in another era might be voiced by Gregory Peck, the dad in To Kill a Mockingbird.

Woody is sort of father-figure, both to Andy himself, and to the toys overall.  He is a take-charge type, who cares for the others, and is willing to risk going out in the “real world” to save Buzz Lightyear.  Woody provides Andy a means to imagine what a good man might be like.

Andy saying goodbye to Woofy symbolizes leaving home, ready one day to be a dad himself.

Woody is honest, reliable, taciturn, brave, but still deep down has various doubts and feels threatened when his place as a leader of the toys is at risk.

Woody shows us what a good leader should be like.  He cares for his friends and worries about Bonnie, even when she does not play with him much.

Woody also shows that leaders are not perfect.  They have doubts.  They sometimes are wrong and learn from others.  But, their inner goodness and sense of duty stays true.

The Toy Story series has a recurring theme of Woody needing to adapt to change.

Woody is an old-fashioned leader set in his ways.  Then, Buzz Lightyear comes along and upsets everything.  Later, Woody has to deal with Bo Peep, spending time at Sunny Daycare and being taken by a new girl (Bonnie), and then leaving his friends to go on with Bo Peep.  The old fashioned cowboy even assigns Jessie, a cowgirl, as his successor.

Woody does not take all of this totally gracefully.  He is upset and repeatedly is resistant to change, including not wanting to go to the Sunny Daycare.  Woody, however, is able to accept things do not stay the same.  He symbolizes how we need to deal with change, even if it is hard.

Woody shows that it is okay to worry and doubt about change.  It will not be easy.  But, you will be able to handle it gracefully.  Somewhat at least.

Another young boy named Andy, in a 1980s film named Child’s Play, has a doll named Chucky.  Chucky turned out to be inhabited by the spirit of a murderer.

Chucky is basically the evil mirror image of Woody, and even served as a sort of evil “father figure” to a new teenage owner in a new Chucky television series.
Should the next series be Chucky v. Woody?  Not a bad idea.