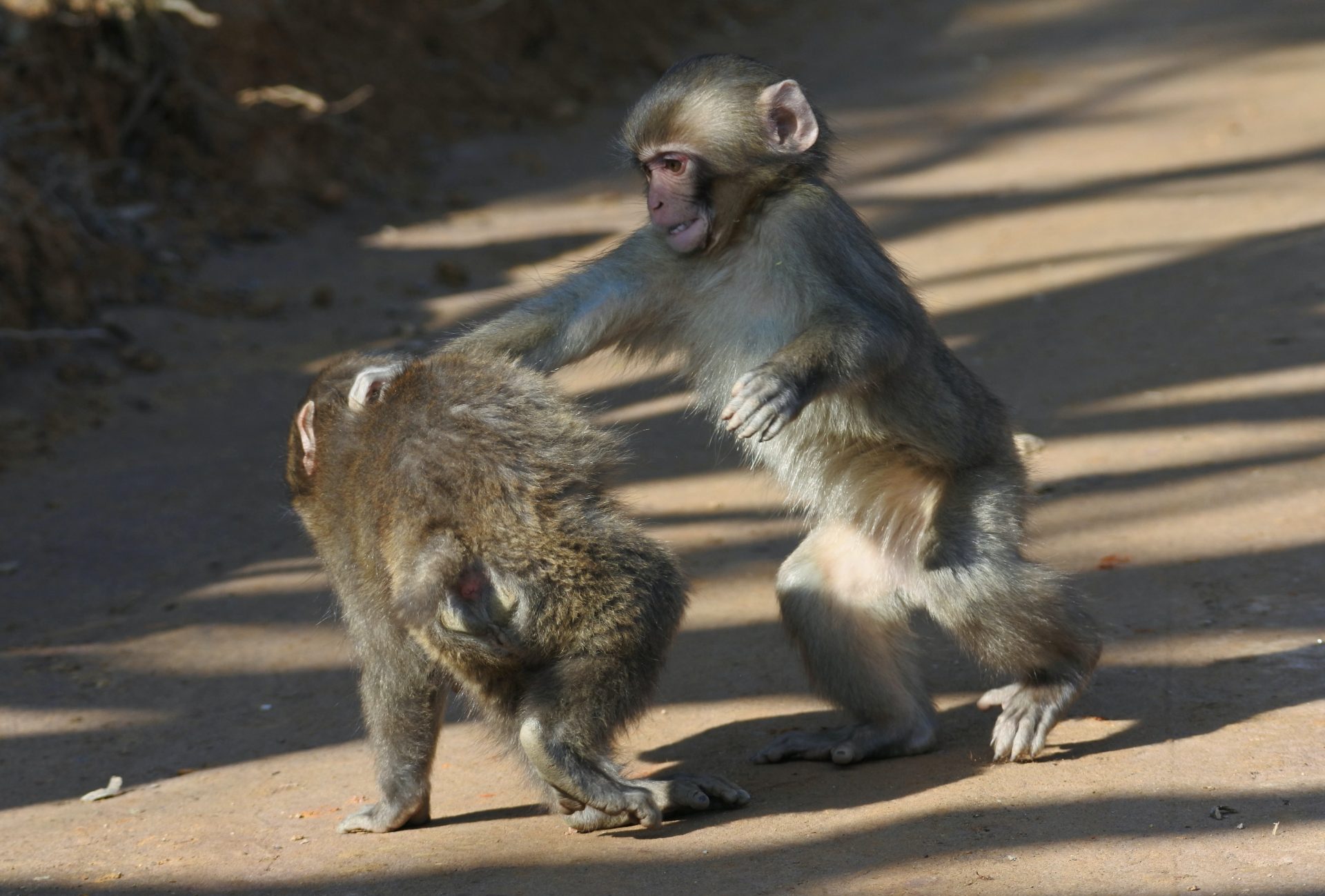 The Japanese monkey, or macaque, is also known as the “snow monkey.”  A familiar presence in Japanese life, they became the source of many stories.  The monkey also is part of the Japanese calendar, the “year of the monkey” occurring every twelve years.  Monkeys are so important to Japanese culture, they are the official animal of Japan.

Animals have always been popular in story-telling, including explaining the origins of things and teaching lessons.  Many different things influence the details of Japanese myths in particular.

The Japanese macaque, or snow monkey, is a monkey species native to Japan. They have long been popular subjects in Japanese folklore, religion and art.  Monkeys are so popular that they are the official animal of Japan.  There is also a national bird, which is a bit confusing!

Monkeys seem very human-like, so are particularly likely to be the subject of story-telling.   They have a range of roles, from villains to heroes as well as symbols of long life.

This complexity is repeatedly cited when the subject of monkey symbolism in Japanese culture is discussed. Are they sacred go-betweens of gods and humans?  Amusing but troublesome tricksters?  Or, acts of fun, reflective of the American saying “monkey see, monkey do” (blind imitation)?   Perhaps, the best approach is to recognize at some time “all of the above.”

You can read some monkey stories here.

Buddhism teaches the path to a happy life.  Zen Buddhism uses mediation and puzzles known as “koans” which are one way to help you concentrate.

One piece of Japanese art represents a monkey reaching for the reflection of the moon, which disappears as it is touched.  This provides a lesson of the ever-changing nature of existence and not to reach for what you cannot grasp.

Shinto believes spirits live in all things, including animals.  Shinto believes that animals protect the gods, the specific animal depending on the particular shrine in question.  The Hie Shrine in Tokyo is protected by monkeys.  The shrine’s location suggests that it is a good place to go to have success in politics and business.

Stories from China and India, reflecting various religious and philosophical beliefs, also inspired Japanese myths about monkeys.   One major source is the Chinese classic, “The Journey to the West,” which tells the tale of the “Monkey King.”

The monkey king is born from a magical stone and later goes on a series of adventures.  The monkey king continues to inspire Japanese culture, including in comics (anime) and video games.

The saying “see no evil, hear no evil, speak no evil” has traditionally been portrayed by a picture of three monkeys.  It probably originated as a saying of the ancient philosopher Confucius, who instructed people how to live a moral life.

The image was popularized in the 17th-century carving over a door of the famous Tōshō-gū shrine in Nikkō, Japan.   The three monkeys are:

There are different meanings given to the saying.  Some argue it means that you should not think evil thoughts.  Others argue that it has a more negative meaning, claiming ignorance.

The image is found in many Japanese holy sites today to ward off evil spirits.

The Monkey in Western Zodiac

Ancient people looked into the heavens and noticed a zone in the sky that marked the apparent paths of the sun, moon, and visible planets.  This zone had constellations of stars which seemed to form in the shapes of animals.  Thus, the term “zodiac,” or “”cycle or circle of little animals.”

This led to the familiar zodiac signs that are believed to provide guidance to our lives.  For instance, I myself am a Scorpio while another person involved in the creation of this site is a Pisces.  Scorpios dislike “dishonesty, revealing secrets, superficiality, and small talk.”  Not bad!

The Chinese zodiac, which is also popular in Japan, is somewhat different. This includes a different origin story.  God (sometimes named the “Jade Emperor”) had all the creatures of the world race.  The first twelve that crossed the finish line represented the zodiac, in the order in which they arrived.  Or, maybe the first that arrived.  Origin stories tend to be a bit hazy.

While the Western zodiac divides the year into twelve signs, the Chinese zodiac has twelve cycles that are each a year long.  Each cycle is represented by a separate animal, one of which is the monkey.  The next “year of the monkey” would be 2028.

But, like the Western zodiac, each symbol is believed to inform your personality.  People believe that a person’s horoscope, personality, and love compatibility are closely associated with their zodiac sign, determined by their birth year.

Horoscopes are not an exact science, but this is one summary of a Japanese zodiac (Juunishi):

People born in the year of the Monkey [saru] are the erratic geniuses of the Zodiac cycle. They are clever and skillful in grand-scale operations and are smart when making financial deals. They are inventive, original and are able to solve the most difficult problems with ease.

Sarumawashi, literally “monkey dancing,” was developed over a thousand years ago as a religious ritual to protect the warriors of Japanese warriors.

Over time, it became a form of entertainment, like the circus today.  Sarumawashi includes acrobatic stunts and comedic skits performed by highly trained macaque monkeys.  The acts show the monkey’s comical and acrobatic sides.

Monkeys are the national animal of Japan.  But, only once every twelve years is there a “Year of the Monkey.”  Still, monkeys have long fascinated the people of Japan, including as protectors of the many shrines found across the country.  Monkeys also are used symbolically, including the famous three wise monkeys.  They pop up in many different guises, a sort of chameleon, maybe!