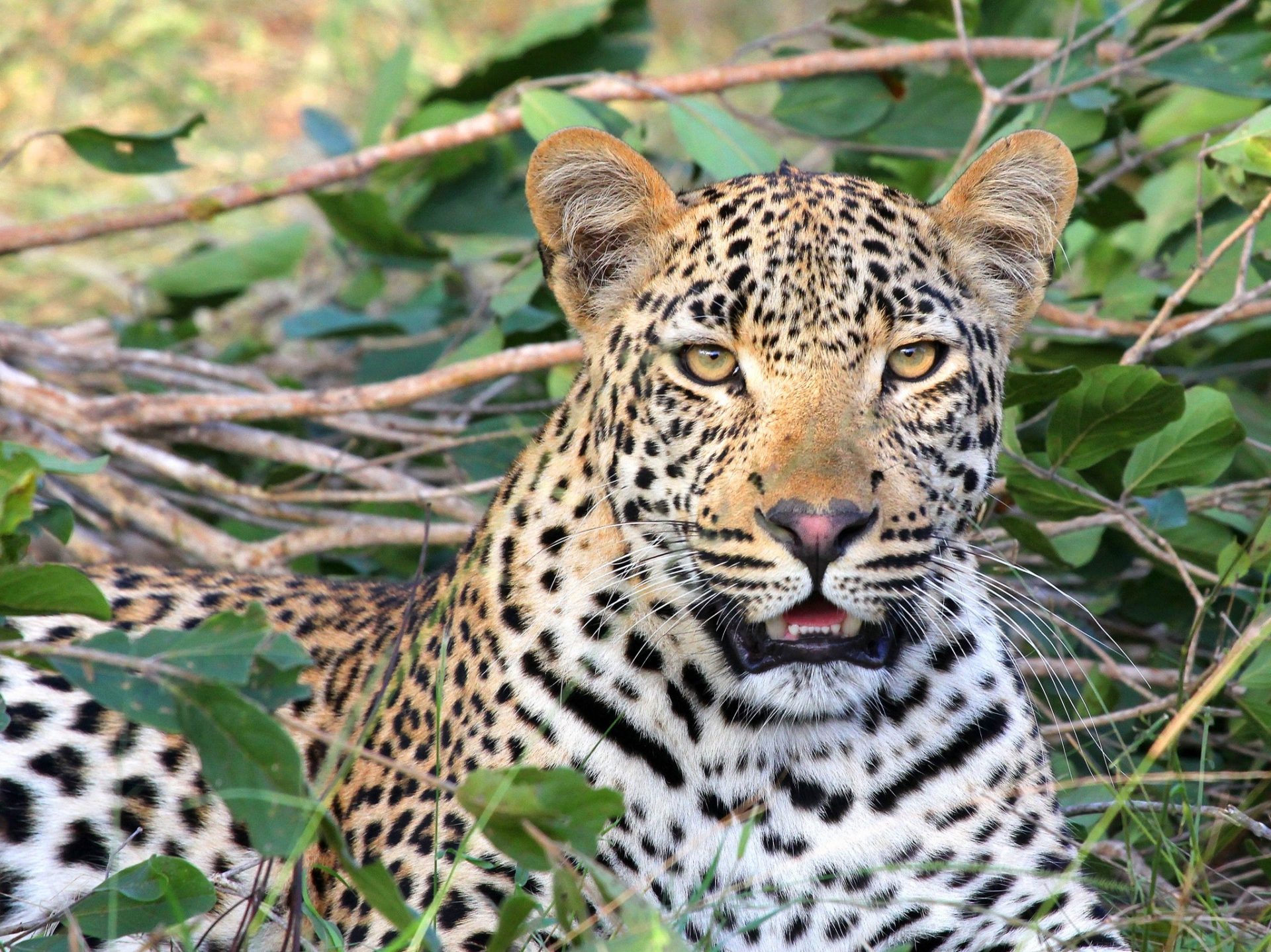 Leopards are large cats with distinctive spots.  They live in Africa and Asia.  Leopards are very good hunters, who usually hunt at night, and can easily climb trees while doing so.  Their fur has been used for ceremonial robes. Leopards in general are symbols of power, authority, and the lands where they reside.  Snow leopards and black panthers are two types of leopards.

Why Do Leopards Have Spots?

Leopards have distinctive dark spots also known as rosettes because they resemble the shape of roses.  But, why do leopards have them?

Rudyard Kipling in his “Just So Stories” tells of a leopard who had no spots.  He blended in nicely into the grass while hunting, but then moved somewhere else.  The forest there was quite different, and he did not blend in.  So, his hunting partner drew spots on his fur to help him out.

Kipling’s story has a basic kernel of truth.  Cats like the leopard who live in dense, dark forests and hunt at night developed markings that provided useful camouflage to blend in.  This helped leopards hide from predators and helped them blend in while hunting.

Leopards are symbols of power and authority in various African cultures.

Leopards were sometimes seen as the “king of the jungle” instead of the lion (The Leopard King musical forthcoming?).  Leopards are good hunters, crafty, and at times a threat to humans themselves.  They symbolize all these things.

The King of the African nation of Benin kept leopards as their mascots and leopards served as symbols of authority.  Leopards were often depicted in local art and sculpture.

A special ceremonial leopard stool was used in some West African nations.  Some believed kings and other important members of their courts had their souls transmitted to the stools when they died.  Such stools were kept in special shrines.

Leopards and leopard-related items today continue to have special significance to many Africans as cultural items, no matter what their own social status might be.

Why are Leopard Skins So Fashionable?

Leopard skins were long believed to be stylish.

The fur is soft and comfortable to wear.  But, even if you cannot have the real thing, fake leopard is popular.  Leopard prints were — and for some remain — particularly popular in women’s outfits.

For many, leopards symbolize power.  Eartha Kitt, the singer, actor, and activist, for instance, once was dressed from head to toe in a leopard print with a cheetah next to her on a leash.  Kitt’s use of leopard print also symbolized her African heritage.

The use of leopard clothing to symbolize wealth and power goes back to ancient times in a range of cultures, from Egypt to goddess Xi Wangmu, known as the Queen Mother of the West in Chinese mythology.  Xi Wangmu was portrayed with the tale of a leopard.

Leopard clothing at times is seen as “wild” or sexy in nature, a means to stand out and show you are a rebel.  Beyoncé and Katy Perry are two celebrities who rocked leopard prints.

FOR THE SYMBOLISM OF SMALLER CATS CHECK OUT THIS ARTICLE.

The saying that “a leopard never changes its spots” means that it is very hard if not impossible to change one’s character.  The saying goes all the way back to the Bible  (Jeremiah 13:23).

The saying obviously compares someone’s nature to the spots on a leopard, which cannot not be removed.  It is also often an exaggeration because a person sometimes can change.

(In fact, leopard spots themselves change from kittenhood to adulthood.)

We should be especially careful to not stereotype, the saying often poorly applied to assume characteristics such as racist or religiously biased opinions about someone.

What Do Snow Leopards Symbolize?

A snow leopard has whitish to grey fur with black spots.  They are native to mountain ranges in Central and Southern Asia.  This led to the popularity of their use in various cultures in this region, including on bank notes, coats of arms, and badges of local girl scout organizations.

Since this tends to annoy them, it is best to know some differences between each animal.  Leopards are smaller than panthers.  Panthers alone are found in the Americas.  Leopards have spots, even if at times it is hard to see them.  Panthers usually have spots.

And, “panther” is a category of cats (“panther” itself means “all beasts”), including jaguars and leopards. A leopard (from “lion” + “panther”) is a type of panther.  So, a leopard might be a panther, but a panther need not be a leopard!

Confused?  Don’t worry.  I still am a bit confused myself.  A handy chart can be found here.

What Do Black Panthers Symbolize?

A black panther is a general term for a large cat with a coat of black fur or large groups of black spots set against a dark background.  They include leopards, jaguars, and mountain lions.

The group supported “black power” and a powerful, fierce-looking black animal was a very suitable symbol, especially one that also symbolizes African culture.

It’s fitting that the powerful warrior of Wakanda in the Marvel film would also be called Black Panther. Wakanda is a fictional advanced nation in Africa. The melding of traditional African leopard symbolism with a modern-day hero from the same continent makes perfect sense.

Leopards are a type of large cat which is found in parts of Africa and Asia.  They are known by their distinctive spots though the spots on black panthers can be hard to see.  Leopards often symbolize power and authority, including as used by the Black Panther Party, following in the footsteps of many African nations.  Leopard prints also can just look darn cool.