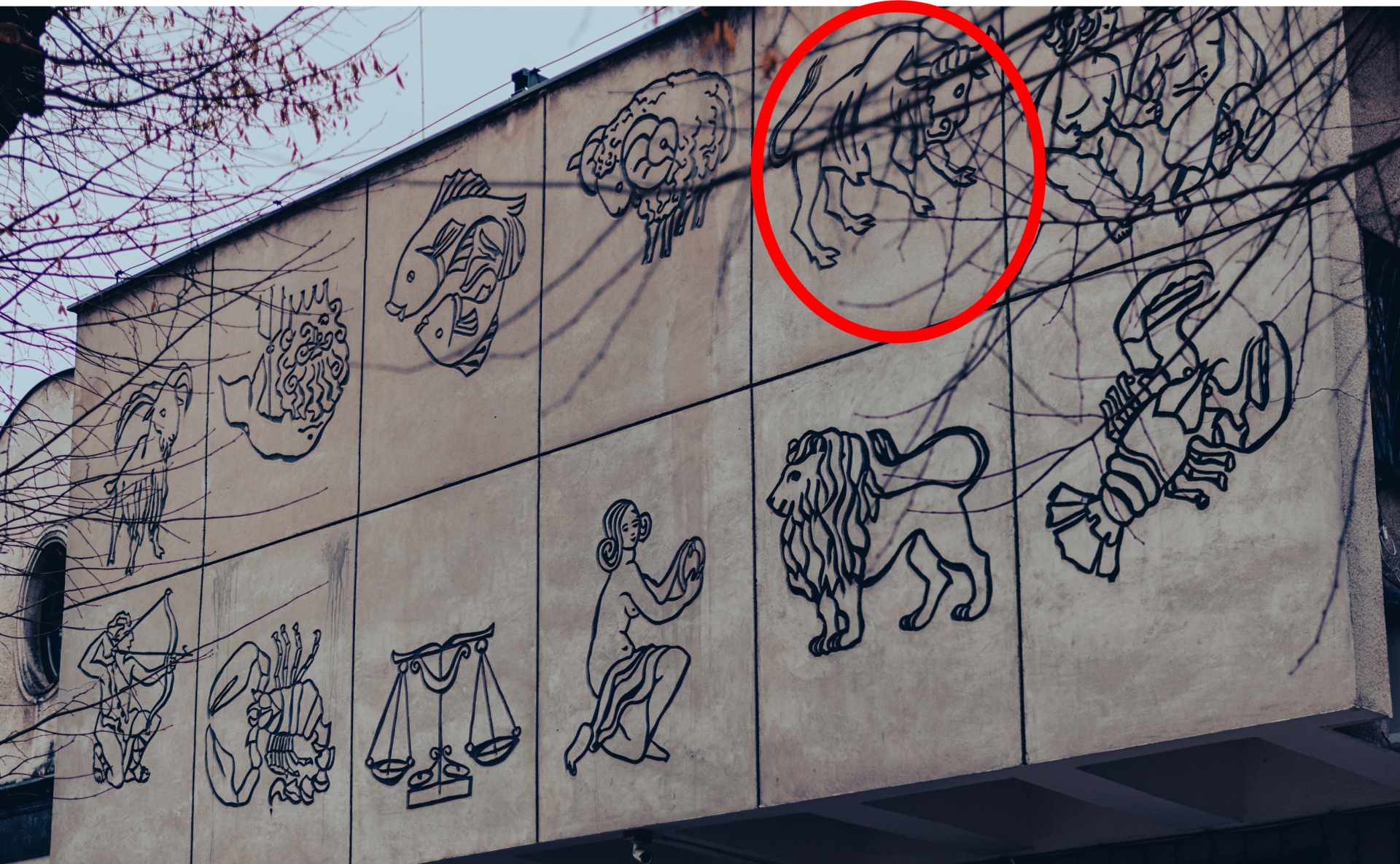 Taurus is the second zodiac sign (mid-April to mid-May). Its symbol is the bull. Bulls were worshiped and feared by the ancients. They continue to have many symbolic meanings such as strength and recklessness. A Taurus can also be both reliable as well as sensual. Taurus is represented by the planet Venus, roses, emeralds, and the color green. The Ford Taurus is a leading example of model branding, showing the power of the symbol.

The ancients looked at the sky and imagined.  They saw an elliptical-shaped band filled with constellations that looked like animals.

This forms the zodiac, which means “circle of animals.”  They also thought the stars provided lessons about how our lives would go.

Early astronomers observed the Sun traveling through the signs of the zodiac in the course of one year, providing us with the twelve date ranges for each sign of the horoscope. I’m a Scorpio.

Why is it the second sign when falls in April and May?  The ancients began the year at the beginning of spring.

This is why “October” is Latin for “eighth” month.  The prefix “octo” is also found in the word “octagon,” the shape of a stop sign  (eight sides).

They imagined the constellation involved here looked like a bull.  Bulls were of special concern to ancient peoples, the subject of worship and stories of half man, half bull monsters such as the famous Minotaur.

Bulls continue to fascinate us, and are included as symbols of strength.

Bulls also can be stubborn and set in their way. A Taurus therefore also might be “bullheaded.” A positive way to frame that is that a Taurus is firm in their convictions.

I was checking Twitter recently and discovered that a famous character of Jennifer Tilly, the movie actress, was now an emoji.  Tiffany Valentine of the Chucky franchise.  You go girl.

An emoji was originally a way to express your emotions in symbolic form such as a happy face.  Now, there is a whole lot of emojis representing a range of things.  They are the modern form of ancient pictograms or Egyptian hieroglyphic symbols (glyphs).

The pictogram for Taurus is a basic representation of a bull:

[Note: If you said that is the beginning of a game of Hangman, I’ll allow it.]

The longhorn symbol is also very popular, especially in Texas.

Each zodiac sign has an elemental and planetary symbol.

The ancients believed that the world was made of four elements: air, fire, water, and earth.  Taurus is associated with the element earth.  Where else would you find bulls, the sky?

A person “down to earth” is considered to be practical, reliable, and approachable.  Someone “earthy” is sensual, uninhibited, and maybe a bit blunt.

Each zodiac sign also has its own flowers and birthstone.  I think this might be to help florists and jewelers.  Maybe, I am being a bit too cynical.

A Taurus is born at the beginning of spring. A Taurus is also associated with Venus, the goddess of love.  The flowers of Taurus, roses, poppies, and foxglove, reflect this.  Poppies often are sentimental, including honoring the dead.  Foxgloves can symbolize a bit of conceit.

The birthstone of Taurus is emerald.  The color associated with Taurus is also green.  Emeralds are precious gems that symbolize the earth, life, and Ireland (the famed “Emerald Isle”).  Taurus birthdays come as spring begins, the time when life grows once more.

The Ford Taurus was a major model automobile for over thirty years.

The Ford automobile company was struggling in the 1970s, eventually experiencing billions in losses.  A new company culture and image were necessary. A new car with a sleek design and innovative features to attract customers.  And, the new model needed a great name.

The marketing company thought up twenty possible names.  Nothing polled as well as “Taurus.”  The name symbolizes a bull and all that represents.  It symbolizes strength, being wild, and the big open country.  Taurus makes you think of Texas and football.  And, a whole lot more.

Learn More About Car Symbolism: What Does the Alfa Romeo Symbol Mean?

Taurus is symbolized in many ways. To summarize:

A Taurus personality-wise is steady, bullheaded, earthy, and a bit wild.  They also can be sensual and full of life.  These qualities are expressed in the seven symbols of Taurus.