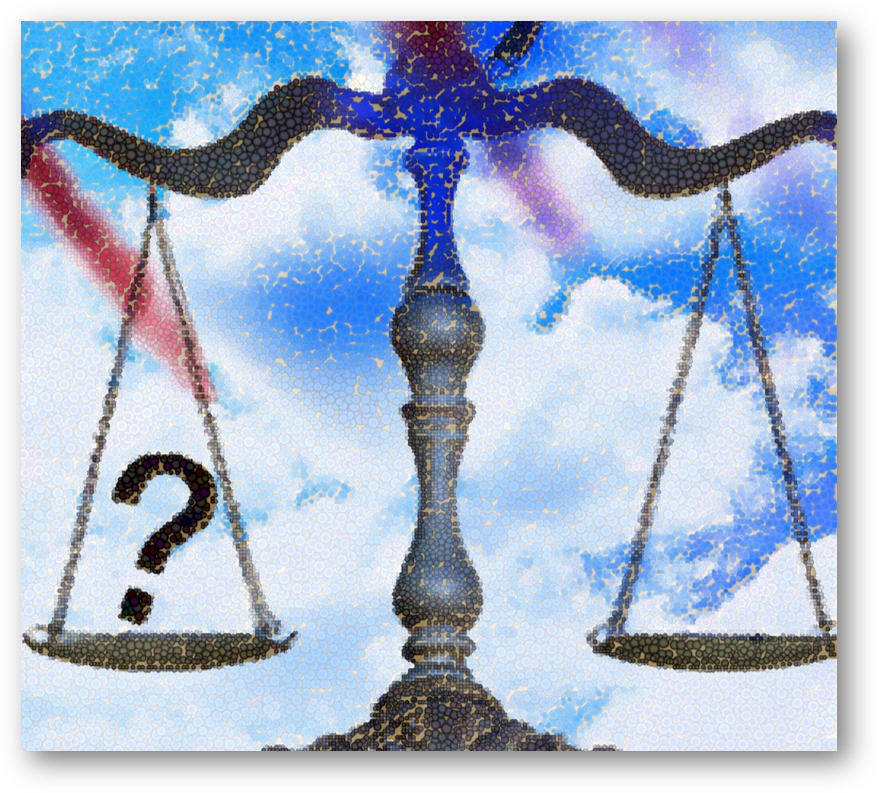 Balance scales were first used as far back as 2500 BCE. They were important in the marketplace.  Balance scales symbolized business, order, fairness, and justice. The zodiac sign Libra is represented by the “scales of justice.” Balance scales are a common biblical symbol. They also symbolize knowledge, science, and a pharmacist at work.

Egyptians believed your heart needed to be the right weight when you died.  If not, you would fail to be judged worthy of an afterlife.  There was a sense of cosmic order symbolized by weighing a human heart with “the feather of truth.”  Your eternity was in the balance!

The Ancient Egyptian use of balance scales showed its relationship with justice has very ancient roots.  The Egyptian respect for order and balance influenced the Ancient Greeks and Romans.

The Bible portrays events that took place in the Middle East, including in Egypt, so it is not surprising that the balance scale is a familiar biblical symbol.

The balance scale was a marketplace item familiar to people in biblical times.  The scale is often cited in the promotion of fairness and justice.  For instance, a proverb (wise saying) is: “A false balance is an abomination to the LORD: but a just weight is his delight.”

The importance of fair use of scales (consider the “thumb on the scale”) is cited, warning against “deceitful weighing.”  And, like in Egypt, God is at times shown as weighing our fates.  The prophet Daniel famously says: “You have been weighed in the balances, and found wanting.”

Many are familiar with the symbol of “lady justice,” who holds the “scales of justice” as well as a sword to enforce the law.  She is often, but not always, portrayed blindfolded, better to determine the law without bias to either side.

In Roman mythology, Justicia (Lady Justice) was one of the four Virtues along with Prudence, Fortitude, and Temperance. The first Roman emperor, Augustus, particularly honored Lady Justice.  Augustus was known for his fairness and sense of propriety.

Lady Justice grew to symbolize the justice system as a whole. The balance represents weighing facts and evidence to decide a verdict.  It can also symbolize weighing the acts of each person and their consequences.  If acts and consequences are balanced evenly, justice arises.

Libra is the seventh sign of the zodiac, falling on average between September 22 and October 23.  Its symbol is the scales of justice.

Libra is the only zodiac symbol represented by an object instead of an animal or mythological creature.  The scales are a symbol of Themis, the Greek personification of custom and order.

The balance scales therefore not only symbolize justice but people who are born at this time of the year.  Libras have a reputation for being fair and open-minded.

Asclepius, the Greek god of medicine, was the patriarch of a wider medical family.  His daughter Hygieia, his top assistant, was famous on her own.  She was the goddess of hygiene and cleanliness. The Bowl of Hygieia became the symbol of pharmacies.

The balance scale overall became a well-recognized symbol of the pharmacist.  They need to weigh the proper amount of medicine.  Too much, too little, the patient will not be healed.

The balance scale also has a wider symbolism as an object of science and knowledge.

Origins of the Balance Scale

When you check your weight at home, it almost seems to be magic.  The scale sometimes even talks to you, hopefully being nice if you gained a bit too much during the holidays.  The scale in the fruit aisle might be a bit more simple, often spring-operated.

The first scale, used as early as 2500 BCE, was a balancing scale.  This scale consists of two plates or bowls attached to an overhead beam, pivoting on a central point (fulcrum).  When the scales were level, this showed that each side had goods of the same weight.

Balance scales were helpful to determine the value of goods such as crops, clothing, and gold, in order to barter for their goods.

The balance scale emoji (⚖️) has many meanings.

We can imagine an ancient marketplace. A person watches as their gold is placed on one side of the balance.  The merchant carefully determines exactly how much is present.  Will they try to cheat a bit?  An honest merchant would not do so, but perhaps this one is a charlatan.

Will we return to this when we die?  Will Anubis, the guardian of the dead, weigh our hearts to see if we are worthy?  If so, he probably uses a modern-day scale.  Speeds things along.