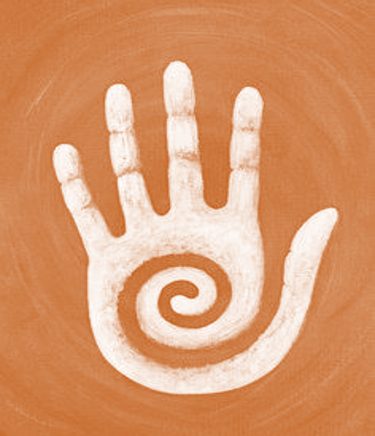 Shamans are holy figures in tribal societies believed to have special powers over the spirit world allowing them to serve as healers. The shaman’s hand is an ancient Native American symbol represented by a spiral arising out of the palm of the hand. It is a powerful symbol of health and good luck.  It is also used in Reiki healing practices.

A shaman is a priest or priestess who has power to heal the sick by means of special knowledge of the spirit world. The word “shaman” originated from Central Asia, perhaps meaning “knowledge.”  It also might be related to the Chinese word for “Buddhist monk.”

Shamans are found in tribal societies, including Native Americans in America.  Shamans have special medicinal knowledge, including concerning local plants.  Shamans are healers.

Sometimes using mind-altering drugs (such as peyote mushroom) to aid them, shamans are believed to have the ability to access the world of the spirits.  Animism is a belief that the world is filled with spirits.  Shamans are important ambassadors to the spirit world.

Shamans are very important figures in tribal societies.  They have access to special power and serve an important role in protecting societal well being. Shamans also are potentially dangerous, having access to resources which can be used to help as well as to harm.

The shaman’s (healer’s) hand symbol is a representation of the palm of one’s hand with an open spiral originating from the center of the palm and running towards the fingers.

The shaman’s hand is an ancient Native American symbol.  It can be found in ancient cave art and carvings in places like modern day Southwestern United States.  The Hopi tribe believes their ancestors placed the symbol at various places on their journey to find a suitable home.

There are different beliefs about what the spiral in the center of the hand means.

Hands have many symbolic meanings.

The hand was an ancient means for Native Americans to mark their presence, a symbol of their whole being, including their thoughts and dreams.  A handprint could be used to mark a person’s home as their own.  A handprint could also be a means to say “I was here.”

A solid hand was sometimes used by warriors as a sign that they were victors in hand-to-hand combat.  If a person wore a hand symbol, it transferred energy to the individual that the symbol was placed on.  A hand symbol was used to intimidate your opponents in battle.

The hand with a spiral in the middle became a powerful symbol of health and protection.

The shaman’s hand was originally understood to be a symbol that only those with special authority could truly control.  Over time, the hand itself became a more general representation of the power of the shaman.  A power each person could obtain for themselves.

The hand has a spiritual significance symbolizing knowledge, strength, renewal, and protection. The hand became a popular tattoo for victorious warriors and it also sometimes was drawn on the horses who helped them in battle.  Fair is fair.

The hand, however, was not only for warriors.  The hand was a universal symbol of strength and power.  It served as protection from harm, including from bad health.

A healing hand symbol, a talisman, became a popular good luck charm.  The symbol could be engraved upon amulets and bracelets and bring good fortune to the wearer.

It is used like the hamsa symbol, a hand shaped good luck charm believed to protect people from the evil eye and promote good luck, including as a fertility charm.

Reiki therapy is the name of a form of alternative medicine, energy healing.

The Reiki healer is believed to be able to control the “life force” energy around our bodies. Healers lay hands on people as part of the therapy.

The Reiki Cho Ku Rei symbol also has a spiral.  The spiral represents the energy centers in the body, which flows from the energy’s source.  Sound familiar?

The Shaman’s Hand began to be seen as a symbol of a Reiki healer’s energy-emitting hand, and so, is also referred to as the Reiki Hand.

The shaman’s hand is often used these days as a good luck charm.  Its mystical meaning as a way to access the energy of the universe is less well known.  Some do still honor this ancient belief, including by adapting it to New Age Reiki therapy.  Symbols tend to develop over time, modern forms retaining reminders of a past age.  Like the spiral, it is a long continuous journey.