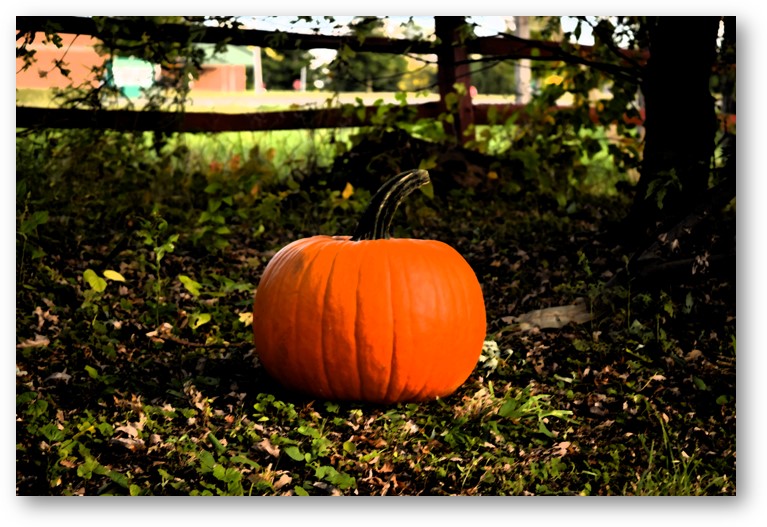 Pumpkins are large orange vegetables.  They have been around since ancient times in the area around Mexico. Now used worldwide, pumpkins symbolize the fall season, children and family, the color orange, and big things.  Jack-o’lanterns are carved pumpkins with a creepy history. Pumpkin spice is a major symbolism-based advertising campaign.

Pumpkins are large (the largest was over 2700lbs) yellow and orange winter squash.

They are one of the oldest domesticated plants, perhaps used as early as 7000 B.C.E. in the Southwestern U.S. and Mexico.  Pumpkins are now grown around the world.

The word “pumpkin” might have arisen from a Greek word meaning “melon” or “riped by the sun.” It might be from a Native American word meaning “grows forth around.”

Pumpkins are used for food (animals and humans), decoration, medicine, fuel, and fertilizer.

Pumpkins have many nutrients; they are rich in vitamins A and C.

A favorite tradition (for those who don’t mess up the carving) is to transform a pumpkin into a scary-looking face, perhaps illuminating it by putting a candle or other type of light inside.

This tradition rose from the story of “Stingy Jack,” who was punished for his ways by being doomed to walk around in the dark night with only some coal (placed in a carved-out vegetable) to light his way.  So, “Jack of the Lantern.”

Originally using turnips or potatoes, immigrants to the United States found pumpkins much better. Later, the legend of the headless horseman (who used a pumpkin for a head) also developed from this basic idea.  He also got mixed up with a schoolteacher.

The original story involved a haunted man walking around using a pumpkin as a lantern.  But, pumpkins later became associated with evil and horror, including the pumpkin being haunted by an evil spirit.  Jack-o’lanterns are the star of the show; Jack himself is now forgotten.

Halloween is short for “All Hallows’ Eve,” November 1st being a Catholic day to honor saints (“hallow” is a form of “holy”).  Catholics now celebrate All Saints’ Day on November 1st.

This time was originally an ancient Celtic (Britain and Ireland) holiday associated with the presence of spirits and ghosts, both good and bad.  The jack-o’-lantern with its association with the devil and evil spirits would be a logical fit for this holiday.

Pumpkins are harvested in the fall (autumn), making them perfect not only to make creepy looking headless creatures but also for pumpkin-themed candies and other Halloween goodies.

Pumpkins are major symbols of fall.

Fall is harvest time. Pumpkin is a symbol of harvest, abundance, and simply big things. The presence of abundance also brings gratitude and generosity.  Pumpkins can symbolize all of this.

Pumpkin-flavored food pops up in supermarkets around September or October, including cereals, bread, and even Kit Kat bars.

Pumpkin pie, however, is probably the most popular pumpkin-related food.  Pumpkin pies are available year around these days.  They are especially associated with fall and Thanksgiving.

Thanksgiving is a family holiday with pie especially having a traditional feel.  Mom was in her kitchen using all those harvested fruit and vegetables for baking tasty desserts.

Thanksgiving preparation is more likely something for the whole family to take part in these days (Chandler will handle the cranberries).  But, a nice warm pumpkin pie with some whipped cream still symbolizes family, holidays, and a big satisfying meal.

Halloween is today largely a children’s holiday. The holiday still is celebrated by others (who don’t like to dress up, get candy, and watch the latest Jamie Lee Curtis Halloween movie?) but especially by children.  All the pumpkin-related stuff here often involves children.

And, how can we forget about Cinderella and her carriage was a really magical pumpkin?  That ball she went to must have taken place in October.  She was after all in disguise.

LEARN MORE ABOUT CINDERELLA AND OTHER DISNEY PRINCESSES

Do Pumpkin Seeds Have Their Owning Meanings?

Seeds symbolize the future, the potential of plenty if you put in the effort, and hopeful expectations.  Seeds also have a sexual connotation so we say that a man “spreads his seed” around when we mean sperm.  Sorry to be graphic, but just trying to be complete here.

A little seed will grow up to be a big pumpkin.  Many will not.  They will be eaten.  Pumpkin seeds symbolize tasty and nutritious things in small packages.  And, like sunflower seeds, they can symbolize the people who eat them, including athletes who want a quick snack.

But, on some level, it all goes back to the beginning.  Pumpkins might have been around for nine thousand years back in what is now the American Southwest and Mexico.

Pumpkins are in competition with apples as a symbol of America. The jack-o’lantern was originally a potato or turnip!  Irish immigrants came here and adopted the pumpkin into their traditions.

The headless horseman was (is?) a Hessian, a British soldier during the American Revolution.  Again, Mr. Pumpkinhead here reeks of Americana.  And, pumpkins are favored in basic American traditions such as Halloween and Thanksgiving as well as Starbucks.

And, Linus in the Peanuts Halloween special yet again waiting for the Great Pumpkin.

As American as pumpkin pie?  Maybe, one season of the year!

There were many scary things in ancient times, especially without the Internet to quickly find help. So, it is not surprising that protection was quite important, including many symbols that...