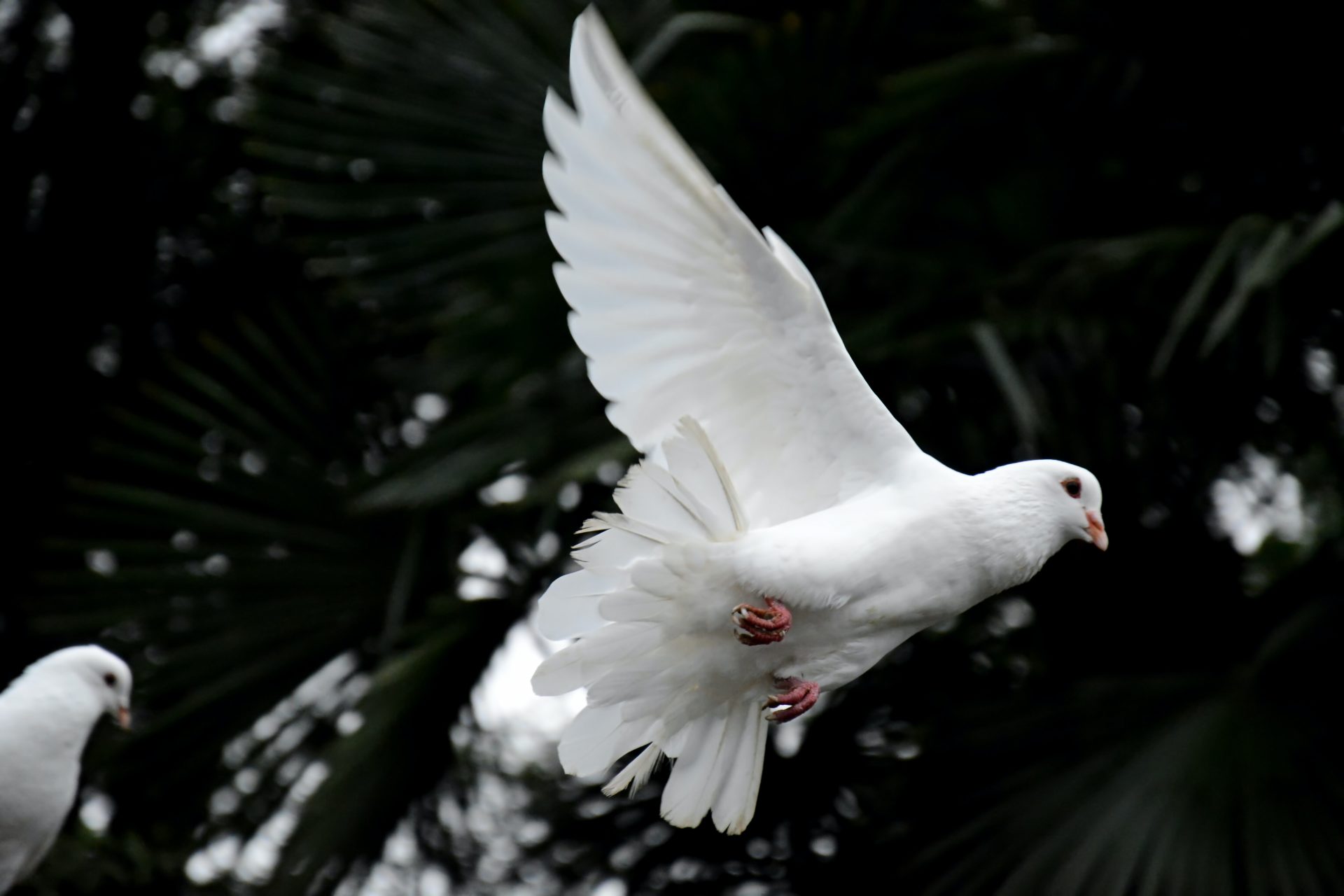 Pigeons have had a special role in human civilization from the very beginning.  Pigeons are messengers, food, religious sacrifices, and used for sport.  Pigeons also symbolize the poor, humility, and urban life. Doves, smaller and more respected pigeons, symbolize purity, peace, and fertility. Pigeons are also honored by a range of religious groups.

The lowly pigeon is often looked down upon.  Some cruel people call them “flying rats.”  But, pigeons have held a special role in human civilization from its earliest days.  Doves, which get all the respect like a favorite child, are basically fancy pigeons.  Let’s learn about them both.

The word “pigeon” means “chirping bird,” and they have a distinctive coo.  A movie from the 1940s about pigeons is entitled Bill and Coo.  Check it out!

Pigeons usually have a blue and gray color with some white mixed in.  Pigeons are known for their distinctive strut and head bob. This helps pigeons balance while walking.

Pigeons live worldwide except in polar regions and the Sahara Desert.  They might be the first domesticated bird.   Pigeons were very important in ancient cultures.

There are over three hundred species of pigeons.  There are estimated to be 17 and 28 million pigeons worldwide.  The passenger pigeon, a wild species, however is now extinct.

Some pigeons migrate.  They can live 3-5 years through fifteen years.

Pigeons favor seeds, but also eat a variety of other foods such as fruit, insects, worms, and even small reptiles.  They also eat a lot of human food, including what old ladies feed them.

A Latin name for the pigeon is Columba livia (“dove” or ‘“bird of leaden or blue-gray color”).  Both its Latin name, and common names (such as “rock dove”) show that pigeons and doves are closely related or are actually the same bird.

What exactly is the difference between a dove and pigeon?  Smaller varieties of pigeons as well as certain white ones are more likely to be called doves.

There is not really a scientific difference between the two.  “Pigeons” and “doves” are socially determined terms.  A “dovecote,” for instance, is a sheltering area for both pigeons and doves.

Pigeons are more plentiful and less precious than doves.  An ancient sacrifice cited in the gospels was “a pair of doves or two young pigeons,” the poor often unable to afford doves.

Pigeon can also be a humble meal though it is often disguised by calling it “squab” (a young pigeon).  Pigeon droppings also can serve as a cheap fertilizer.

Cuneiform records back five thousand years ago tell us how long ago pigeons were domesticated.  They have been familiar sights in urban areas ever since.  Pigeons in the 21st century continue to symbolize the urban areas they frequent.  New York City might be called “pigeon city.”

Pigeons often have a bad reputation, deemed a sort of dirty homeless type of bird. The negative connotation is also seen in slang such as “stool pigeon” (a traitor) and “pigeon toed” (like the toes of a pigeon).  A “pigeon” also is slang for being a patsy, an easy mark.

Fans of The Odd Couple might remember the “Pigeon Sisters.”  Their last name is a play on words.  The two sisters are British. A “pigeon” is British slang for a person, particularly a young woman, comparable to someone being a “good bird” or a “good person.”

Doves are basically fancy pigeons.  They get much of the good press on the symbolism front.

Doves (usually white) from ancient times symbolized purity, gentleness, and peace. A “dove” is someone who supports peace and opposes war.

It got to be that even being pooped on by a dove is seen as lucky.

Both male (by day) and females (by night) help incubate (keep warm) their eggs.  They also both produce a type of “crop milk” used to feed their young.

Pigeons are symbols of co-parenting done right.  They also symbolize romance and marriage.  It is not surprising that a typical sacrifice involved two birds, one of each sex.

Doves often symbolize fertility and are popular at weddings.  One 1970s wedding book (The Eternal Bliss Machine) tells of a common practice of staging doves flying out of the cake.  Apparently, if a dove laid an egg during this process, it was particularly lucky.

Pigeons can mate year-round.  No wonder they are fertility symbols.

The early presence of pigeons in civilization helped pigeons and doves to have special religious significance.  Images of pigeons were first found in an excavated temple dedicated to the goddess Ninhursag (Queen of Heaven and Earth) in Sumeria (Iraq).  Many early cultures, including Ancient Egypt, sacrificed pigeons.  An animal had to have value to be worthy of this.

A dove told Noah when the flood was over. Doves have a special Christianity symbolism, including representing Jesus’ baptism.  Islam also honors pigeons as “ambassadors of peace.”  Other religions also honor pigeons, including Hindus and Sikhs.

Pigeons have special abilities to find their way home, even from over a thousand miles away.  Pigeons were from ancient times used as messengers.

Before modern communications, pigeons served an often essential role delivering messages, including during wartime.  The first airmail service using pigeons was established in 1896 in New Zealand and was known as the Pigeon-Gram Service.

Their long wings and powerful flight muscles allow pigeons to be strong and swift fliers.  Mix that with wondrous homing abilities, and pigeons are popular racing birds.

My dad had a coop on our roof and raced pigeons.  He had a special clock to show to the second when they arrived home.  I guess everyone needs their retirement hobby!

Pigeons have a special significance for me personally.

They are my basic up close and personal connection to birds in my everyday life.  I see and hear other birds all the time here in the city.  But, on a daily basis, pigeons are the birds I see.

They are quite comfortable with humans.  They will fly down and walk around within a foot of you.

There seem to be one or two pigeons who serve as a “landing party,” looking for food.  If you toss some bread crumbs or other food, many more will come.  Let the cooing commence.

Continue Reading
link to Blue Jays: What Do They Represent?

Blue Jays are birds who live in the U.S. and Canada related to crows and magpies. They are both smart and wily birds, not even their color fully on the level.  Blue Jays are symbols of loyalty...