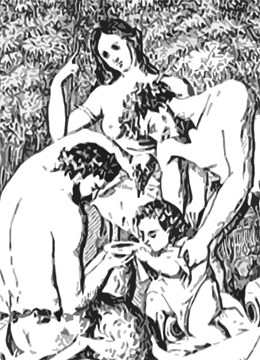 Asclepius, the Greek god of medicine, was the patriarch of a wider medical family. His daughter Panacea was famous on her own.  She was the goddess of remedies. Panacea had a special cure-all for all ailments. In real life, panaceas (perfect solutions) are a lot harder to find.

I swear by Apollo Healer, by Asclepius, by Hygieia, by Panacea, and by all the gods and goddesses, making them my witnesses, that I will carry out, according to my ability and judgment, this [Hippocratic] oath and this indenture.

The original Hippocratic oath, the ethical “do not harm” promise taken by physicians, referenced various Greek gods and goddesses.  Apollo is the most familiar while the other three are a father and two of his two daughters.  The Asclepius family’s business was medicine.  Many health symbols depict Apollo and his family.

Panacea has an impressive pedigree, especially if you are a fan of the Ancient Greek gods.

Her grandfather was Apollo, himself associated with, among other things, medicine.  The famous Delphic oracle was also dedicated to him, showing his gift of prophecy.  And gambling?

Apollo’s son was Asclepius, of the Rod of Asclepius fame.  He was the Greek god of medicine, his shrines serving as early healing centers.

Asclepius married Epione.  Epione’s name means “soothing” and she was the goddess of soothing pain.  We know little about her, but there is evidence she had her own cults in places like Athens.  So, perhaps Epione was also honored independent of her more famous husband.

Panacea is one of five daughters of Asclepius and Epione.  Her sisters were Aceso, Aglaea, Hygieia, and Iaso. Her brothers were Machaon and Podalirius.

At times, Panacea had more brothers and/or less sisters.  Myths tend not to be exact about certain details;  Panacea at times was also cited as Asclepius’ husband (and Epione not cited as her mother) as was at times one or more of her sisters.

The confusion about her familial details should not lead us to forget Panacea’s importance in Ancient Greece. The mention of Asclepius, Hygieia, and Panacea in the Hippocratic Oath underlines her importance.  Panacea might have had an independent existence as a goddess and only later brought into Asclepius’ orbit, both as his wife or more often as his daughter.

A hint about Panacea’s role (each of her dad’s daughters in time adopted some sort of health-related role) is her name.  The Greek translates as “all healing.”   The Greek “pan” is found in various words, including “pandemic” (“pertaining to all people”), somewhat relevant in 2022.

Panacea was the Greek goddess of the universal remedy, the one with a cure.

Asclepius might have been given secret medical knowledge from snakes, including when a snake carried a herb in its mouth to revive a snake that Asclepius recklessly killed.  Hygieia was portrayed feeding snakes from her special bowl, later the symbol of pharmacies.

Panacea also was known for her herbal knowledge.  She supposedly knew a special herbal recipe that was able to create a special medicine that could heal all illnesses.  At times, it could also be made into a poultice, a sort of special paste to put over burns and other sorts of wounds.

Panacea was known to favor the woods, always looking for new herbs to make her medicines.

She can be seen as the symbol of all women from times immemorial having special knowledge about the medical value of plants.  Women were traditionally the gatherers while men were out hunting.  Those plants were not only fundamental parts of society’s diets but also often had medical value.   Panacea is a useful reminder of the role women always played in health.

[To be clear, women in hunter and gathering communities also did some forms of hunting, especially of small animals.  But, gathering was often their specialty.]

The word “panacea,” something that solves everything, comes from her.

“Panacea” is usually used in a negative way, as some sort of fantasy solution when in real life things are not that easy.  It is appropriate here that the symbol of universal remedy is a mythical being.  After all, only Panacea knew the secret cure for all diseases.

A Bit of Trivia

Zlatna Panega (“Golden Panacea”) is a river in modern day Bulgaria, which in ancient times was part of Thrace.  The river also gave Panega Glacier (Antarctica) its name.

One skillful drawing of Panacea portrays her with a basket collecting herbs, the family’s familiars (snakes) of course present as well.  She is collecting remedies, not necessarily panaceas.   Life is a bit more complicated than that.

Panacea is the Goddess of Remedies.  She is an important health symbol. Even if in real life there is no one size fits all, all-powerful remedy for many problems.  Panacea, like scientists today, is still out there, continuing to search for new remedies.  COVID19 surely shows there is a neverending need for them.