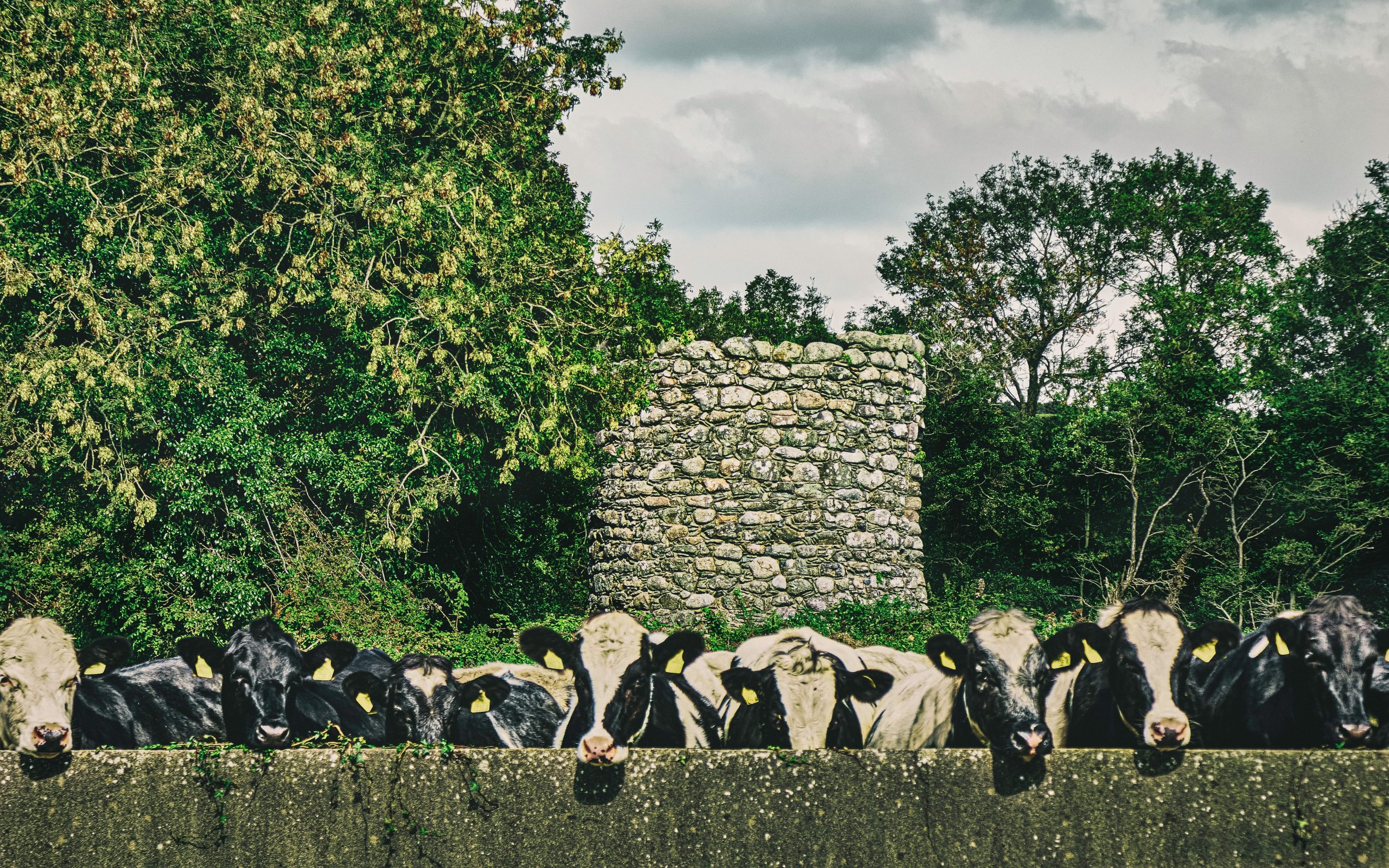 Cows are not likely to be found in many places these days. They are, however,  still a big part of our lives and culture.  And, they symbolize many things, from farm life to healthy living to many familiar cultural references.  Don’t have a cow?

The humble cows symbolize a simple life on the farm in America. It conjures up ideas of basic, good living. In India, cows are sacred animals representing the gods and the four objectives of life. In a more negative vein, being called a cow — particularly if you’re female — is a deep insult. It insinuates that you are less than attractive.

The first thing many people think about when a cow is mentioned is a farm.  When we think of a typical family farm, a few basic things come to mind — cows, chickens, and pigs.

Cattle are both male and female.  They might have a bit of wildness in them.  Think of cattle drives where there might be stampedes.  Or, bulls in a ring, with a matador and all that.

But, a cow is totally domesticated.  Cows often symbolize life on a farm.  It represents civilization.  And, though waking up early in the morning milking cows is not that easy, it represents a certain sort of pleasant civilized life at that.

The Cow as a Symbol of and Old-fashioned Lifestyle

The traditional, somewhat stereotypical, image of farm life also symbolizes old-time values.  And, a cow often is a quick way to show this.  Nothing controversial about a cow!

Somewhat related, a cow is wholesome.  This is used in advertising.  Cows are wholesome, so milk is as well.  Advertising for milk often emphasizes both a traditional view of raising cows on a small family farm as well as how wholesome it all is.

Sacred Cows of the Hindus

A “sacred cow” is a term used to describe a commonly held, respected belief or idea.

This usage originated from the Hindu practice of considering cows to be a sacred symbol of life.  Hindus associate the cow with Aditi, the mother of all the gods.  Even today, there have been instances of people murdered in India for killing a cow.

Why?  They make a pretty good argument.  Not only is a cow a gentle creature, but it is quite useful.  It produces five things — milk, cheese, butter (or ghee), urine and dung. The last might sound a bit disgusting, but was and remains a very useful fertilizer to grow crops.

In ancient texts, such as the Vedas, cow horns symbolize the gods. Their four legs symbolize the four objectives of life: salvation, wealth, righteousness and desire.

Many others treat cows as very important and wholesome.  So, this is really just a step beyond a common view of cows.  Even if not sacred, the cow is symbolized as important, if not essential.  Many think cow products are essential for a good life.

Cows have long been a favorite part of popular culture.  In the process, they became well-remembered symbols in a range of ways.

This might go back to the book of Genesis in the Bible.  The nation of Israel started with Jacob and his two wives, Leah and Rachel. “Leah” is sometimes thought to mean “wild cow,” while Rachel means “ewe.”   However, others say Leah’s name means something like “weary” or “tired.”

A cow also supposedly started the great Chicago Fire of 1871 by kicking over a lantern.  This is likely a myth, but it again shows the importance of cows in popular culture.

Favorite cows include “Old Spot,” a beloved cow of the Boone family, and Tevyre’s loyal cow in the Fiddler in the Roof stories.  Cows also pop up in pop culture references.  Joey on Friends speaks of a “moo point,” a cow’s opinion, something that doesn’t matter.

Of course, the most famous one these days is “don’t have a cow, man” by Bart Simpson.  He means “don’t get all excited for no good reason.”  The saying is actually from real life, arising from a British saying of unclear origins.  Perhaps, from the idea of the struggles of giving birth to a calf.  That is a lot of work!

There are a lot of statues of cows out there.  Some years back, there was a series of cow statues in New York City.  I saw them from time to time and thought they were nice.

Statues represent what we care about.  They symbolize things.  The importance of symbolism was recognized when creating a feminist symbol in honor of International Women’s Day.

The famous “Fearless Girl” statue was originally planned to be named the “Wall Street Cow.”  Cows are not all bad, surely, but that is quite different from the end result: a girl facing down a bull.  Some still are not a big fan of the statue.  It all does show the importance of symbolism.

Cows do not only have positive or fairly neutral connotations.

Cow symbolism is sometimes used in nasty ways.  “Cow” or “heifer”  (a young cow who did not have a calf) is used as a putdown for girls and women.  It tends to mean “fat” or “fat and ugly.”  Cows are seen as big, not very attractive animals, who do not have much grace.

Since Leah was seen as the “plain one” as compared to her sister Rachel, the cow/ewe name meanings referenced earlier also reflects this overall usage.

Cows are also used as symbols in the animal rights movement.

Vegetarians are people who do not eat many types of animal products such as meat, chicken, and fish.  But, many vegetarians still eat eggs and milk products.  Others argue that this is not enough.  “Cow milk is for calves.” And, milk production is argued to be a cruel industry.

Cows also sometimes are used as symbols for human rights as well.  Sherry Colb, for instance, has written much about feminist issues.  She commonly uses animals, particularly cows and chickens, to argue her points.  Colb argues human and animal rights are a united whole.

In the end, I think Joey Tribbiani might have been wrong to say that a cow’s opinion does not matter.  Cows seem to be pretty important, symbolizing a range of things.  We may have a few too many “sacred cows,”  but cows remain pretty good things to honor all the same.