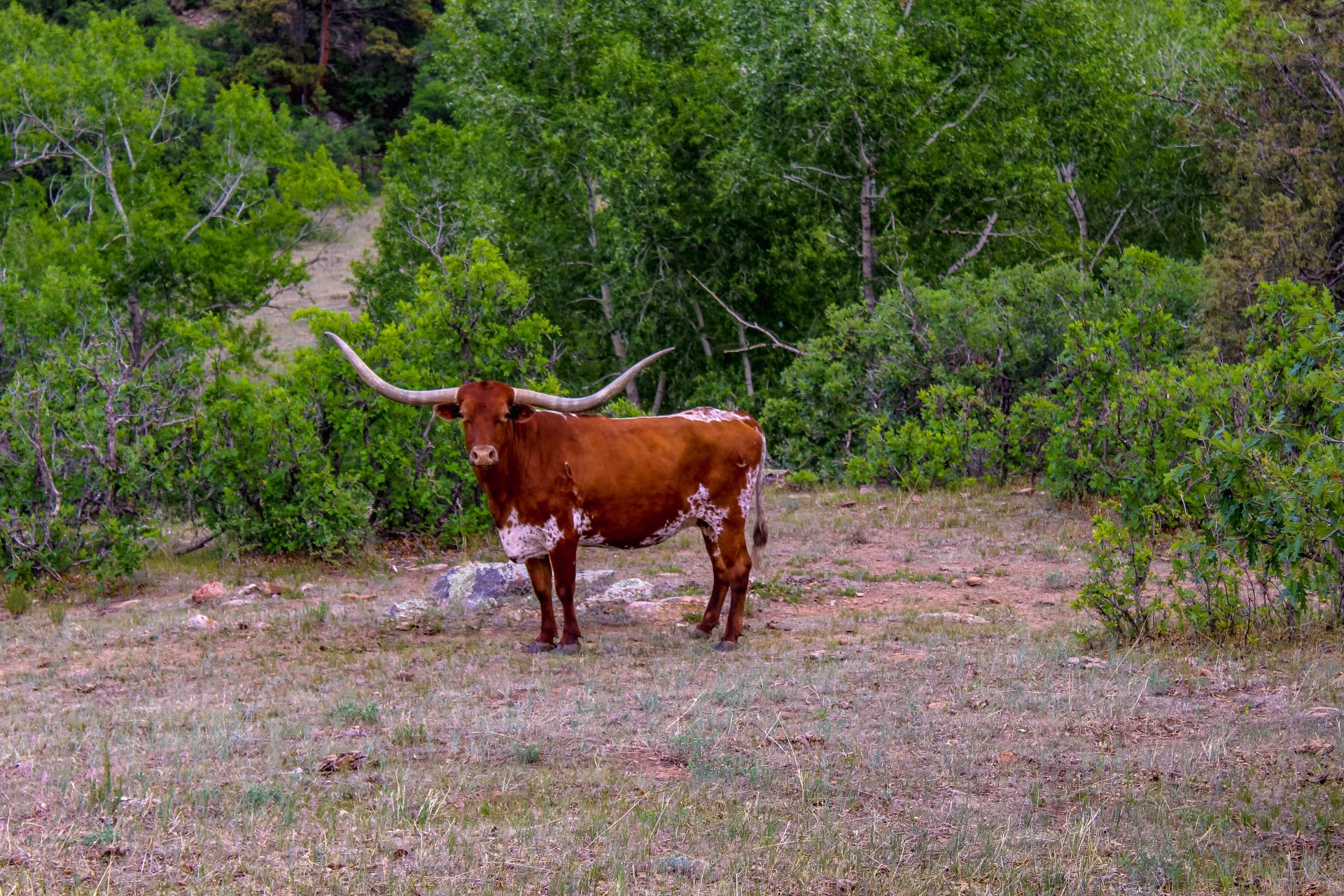 Longhorns are long-horned cattle of Spanish derivation, formerly common in the southwestern U.S.  They became known as particularly tough and fierce but also smart and courageous.  Their telltale longhorns became symbolic of all things Texan and Western in general.  The “sign of the horns” also has a variety of meanings, not all very nice.

Cattle are not native to North America.  The Spanish brought over Moorish-Andalusian (Muslim controlled Spain) cattle to North America, starting with Christopher Columbus.  You can read more about that topic here.

The cattle were originally used to produce animals used for bullfighting.  In time, they developed particularly long legs and longhorns, useful offensive weapons and defensive tools.  The Spanish did not fence their herds, resulting in many cattle becoming wandering off and joining wild cattle.  The cattle became very hardy and self-reliant.

In the 1820s, people from the United States started to settle in Texas.  They bred English cattle, which in time crossbred with the native cattle to form the telltale Texas longhorn.  Their horns could grow over one hundred inches from tip to tip.  Thus, the name, “longhorn.”

What Qualities Do Longhorns Symbolize?

Longhorn cattle are known for their toughness, ability to take a lot of adversity (resilient), and fierceness.  But, longhorns are not just seen as mindless brutes. They also have a reputation for being clever, agile, and courageous.  Many Texans see a lot of themselves in longhorns.

The Texas longhorn, or simply the longhorn symbol or a silhouette of the cattle’s head, became a popular symbol.  Longhorn tattoos are very popular for many people.

There is a long tradition among Native Americans and in Mexico to use bull skull imagery.  Some Native Americans believe the bull skull overall provides life-long protection from all natural elements.  It also represents such things as leadership, durability, toughness, and other things longhorns specifically often symbolize.

The Texas longhorn, or simply the longhorn symbol or a silhouette of its head, became a symbol of cattle drives.  Cattle drives are when a large number of cattle are moved from one place to another, including to the market.  And, what happens in a lot of John Wayne movies.

Cattle drives are usually done by cowboys on horseback.  Longhorns also are used for rodeos.  Thus, longhorns bring to mind, symbolize, not only cattle drives, but a whole Western vibe.

One estimate states that “By 1865, about 5 to 6 million Longhorns resided in Texas, and most were unbranded.”

No wonder that they became a symbol of Texas itself though it was not made the official large mammal symbol until 1995.  The longhorn also became the symbol of the University of Texas at Austin, the official mascot being “Bevo,” the Texas longhorn.  It’s trademarked and everything.

The Longhorns symbol represents the university and all the sports there. But, football is particularly popular in Texas, so the longhorns symbolize football maybe a tad more.

The Longhorn Steakhouse is a popular casual dining restaurant. The first location was built in 1981 in Georgia, but soon became a franchise with locations throughout the United States and internationally.  There are over five hundred locations today.

The steakhouse’s logo is the familiar longhorn symbol, very appropriate for a restaurant with a Western/Texas theme.  The logo underlines the idea the restaurant brings a bit of Texas wherever it might be.  Each bite ideally brings to mind a whole Western vibe.

Why is “Horn’s Down” A Problem?

As a somewhat casual football fan, all the rules at times can get confusing.  Please don’t judge me too harshly, if this is a problem. The readers of this Texas-friendly entry might be particularly sensitive about such matters.  The importance of football in Texas is not only apparent to Friday Nights Lights fans, but was recognized by the U.S. Supreme Court.

One penalty that has real “these are a bunch of boys” energy is taunting. “Horn’s Down” gestures can now be subject to a taunting penalty.  This as you might expect has led to some passionate feelings on both sides.  For the uninitiated, what exactly is the problem?

“Hook ’em” or “Hook ’em Horns” is a symbol representing the longhorn mascot of the University of Texas. The “hand down” symbol is a playful taunt used against them, especially by rival football fans.  Some Texans find this very disrespectful.   Others take it in the playful, if often very passionate, competitive fashion most probably intend it to represent.

The “sign of the horns” hand gesture has many meanings.  This has led to some confusion when people are only familiar with the “Texas longhorns” symbolism.

In many cultures, including Latin American and Mediterranean countries, the sign of the horns hand gesture can have an offensive connotation.  Italians understand the horns (cornea) gesture as symbolism of a man whose wife cheated on him.  Flapping the fingers (or “throwing the horns”) can also be the symbol of “bullshit” in sign language.  Texas Longhorn fans be on guard.

The symbol also can have Satanic implications.  Satan often is portrayed with horns.  And, the horns can symbolize the bones of cattle, symbolizing death.  Heavy Metal musicians often use the hand gesture.  The sign of the horns also is used by some criminal gangs.

Longhorn cattle developed from a crossbreeding of Spanish cattle and English breeds in 19th Century Texas.  They became symbolic of not only Texas cattle drives, but eventually Texas itself.  A good way to trigger Texans was to use their “hook ‘em horns” symbol, the “horns down” symbol eventually becoming a popular taunt.  Meanwhile, longhorn fans should be on guard: the telltale longhorn hand symbol can mean some naughty things too.  Try to avoid embarrassment!