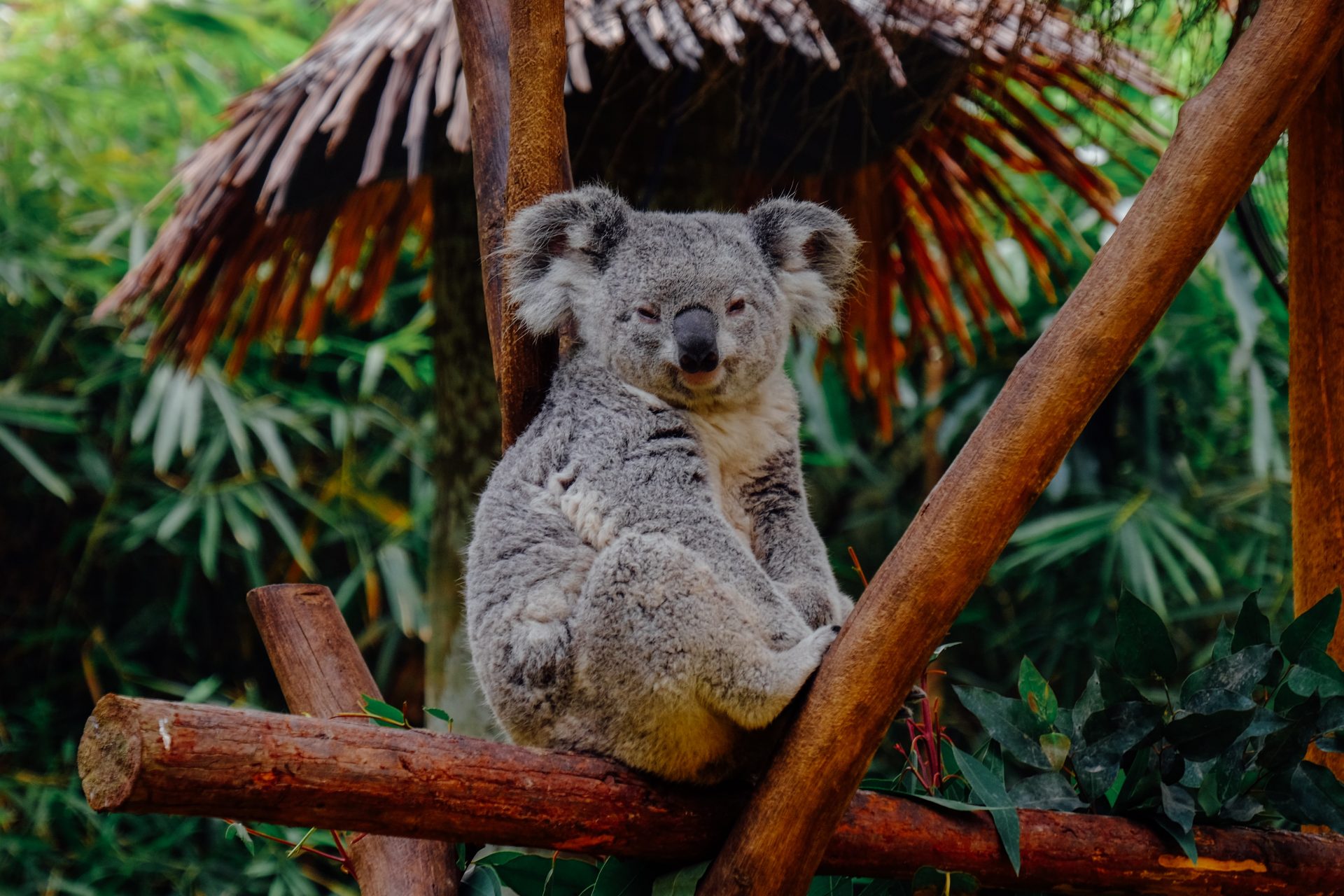 Koalas are animals who not only live in but are closely associated with Australia.  They might look like bears, but they are actually marsupials, like kangaroos.  Their babies are called “Joeys.”   Koalas, like humans, have opposable digits on their paws.  And, they are rather cute.

The quintessentially Australian koala does represent cuteness. This furry marsupial can also represent laziness. Having a sleep schedule of 20 hours a day does seem to bear this out. And even though Simon and Garfunkel chose a rock to symbolize being a loner the not-very-social koala is a much more alluring depiction!

Koalas live in Australia (which is about ready to have “Christmas in summer” as I write this).

Koalas have become one of the most familiar symbols of Australia.  Koalas are often used to promote tourism.  One cute 1960s advertisement for an Australian airline involved a koala finding it “unbearable” that so many tourists were coming in (see video below).

Many world leaders, including President Obama, Queen Elizabeth II, and Nelson Mandela have had their pictures taken holding a koala.  Australia’s use of koalas as a means to bridge different cultures led to the term “koala diplomacy.”  Move over pandas!

The special place of koalas has also led to additional concern about conserving their habitat and other threats to their well-being.  You can “adopt” a koala and help in other ways here.

Indigenous peoples of Australia, the original settlers,  have many beliefs about koala’s role in their origin stories.  These are sometimes called “Dreamtime stories,” regarding a mythical time in the distant past.  The stories have religious and cultural meaning to the listeners.

The Tharawal people believe koalas helped row the boat that brought them to Australia.  Another more brutal myth tells about the killing of a koala and use of its intestines to create a bridge for people to come.  Koalas generally often are seen as wise, helpful creatures.

Big ears, big black nose, a lot of fur, and a child-like appearance.  When researching this topic one thing that immediately arose in searches is “cute.”

They are popular stuffed animals and tourists love to watch them.

Koalas Are Not Bears

When Europeans first saw koalas, they thought these tree-climbing animals were bears or monkeys.  They have a bear-like look about them and monkeys love trees.

Koalas are not bears.  They are marsupials like kangaroos and wombats.

A basic characteristic of marsupials are pouches in which their young (called “Joeys”) stay until fully developed.  Marsupial babies are born not fully developed, so need to stay in the pouch for their protection.

Koalas love trees and have sharp claws that help them climb.

Koalas are also one of the few animals, like humans, who have opposable digits.  The opposable digits on their paws help koalas grab branches and pick eucalyptus leaves, their main form of nourishment.  Koalas use bacteria in their stomach to help break down the leaves and protect them from something poisonous to other animals.

Like humans, koalas also have fingerprints.  Human and koala fingerprints look very much alike.  Scientists have theorized both humans and koalas developed fingerprints because the ridges that cause them help each to grasp things.  Also, it helps investigate crimes on CSI: Australia.

IF YOU’RE INTERESTED IN THE SYMBOLISM OF CUTE ANIMALS CHECK OUT THE TEDDY BEAR ARTICLE HERE.

A koala’s body, cute and strange looking to us, is quite functional.

Extra thick fur on their bottoms helps them sit for hours on branches.  Their rough fur also repels water, keeping them dry.

Koalas’ big, fluffy ears help them have an excellent sense of hearing.

They have poor eyesight, so they detect predators by sound.  They also have an excellent sense of smell.  So, yes, that big black nose also is quite useful.

Koalas spend most of their time alone.  This makes sense, with all that sleeping!

Koalas spend most of their time sleeping and eating by themselves. The only time they spend with other koalas is during mating and raising their young.  Koalas are loners.

Koalas are peace-loving plant-eaters.  Europeans first thought they were fierce, but in time learned about their true nature.  But, there is one ferocious type of koala: the drop bear.

One account provided some helpful hints on how to protect yourself:

Volker suggests several methods bushwalkers can adopt to defend against potential drop bear attacks. These include wearing forks in the hair or spreading Vegemite behind the ears or under the armpits.

Koalas Has A Reputation for Laziness

Koalas are popular with Asian tourists to Australia.

So, it is perhaps not surprising that one of China’s leading Internet and online game service providers was named after them.   The reason given for the name was that the company “wants its online users to stay lazy and comfortable just like the marsupial.”

This supposed reputation for laziness (and sometimes greediness) often is used to explain how the koala lost its tail.  One such story can be found here.

And, it is true that koalas are sedentary, slow-moving creatures; they like to stay in one place in their trees.  Koalas can sleep up to twenty hours a day.  That does sound pretty lazy!

This is not really because they lack initiative.  Their diet of eucalyptus leaves does not have many calories, so koalas compensate by sleeping a lot and moving slowly.  Like cats, if for different reasons, all that sleeping is quite sensible.

Koalas are peaceful lovable animals, except for those fierce drop bears.  Those things are nasty!  Koalas have a reputation for being lazy, while their curious look makes them a good symbol for Australia.  They are not bears, but they are forgiving sorts.  Call them “koala bears,” if you like.