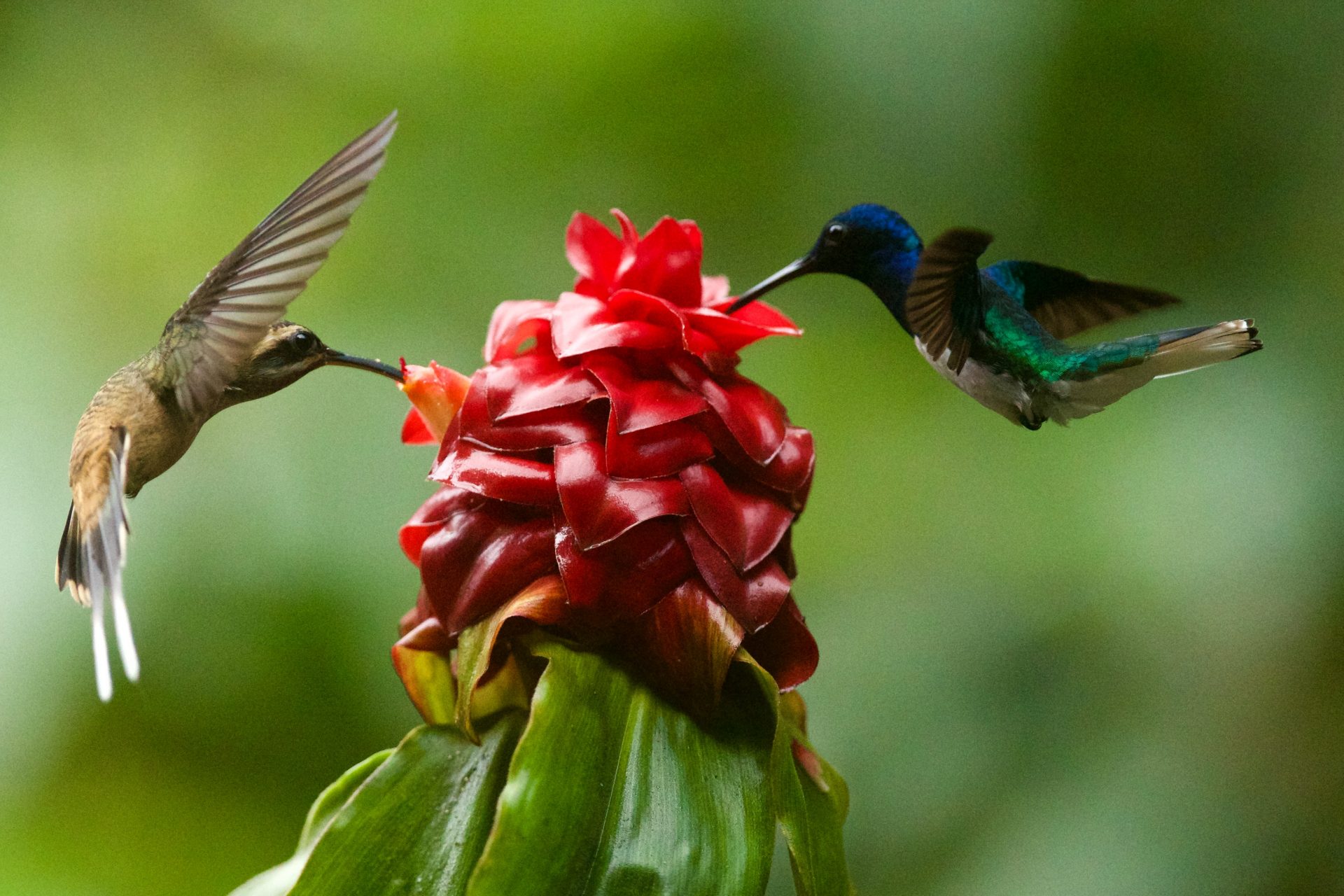 Hummingbirds symbolize things very small and fast. They also symbolize natural wonders, even in comparison to many other amazing birds. Hummingbirds can also symbolize agility, courage, diligence and hard work, being full of energy and good health, and beauty. They also have religious significance, including to Native Americans such as the Aztecs.

Birds are full of symbolism.  The tiny hummingbird, however, stands out.  This wondrous little speed demon charms and amazes, chock filled with symbolism even in their tiny package.

Some Facts About Hummingbirds

“Hummingbirds”  get their name from the humming noise that occurs when they flap their wings very fast.  So, no, it is not because hummingbirds cannot remember the words.

Hummingbirds also have a variety of calls, which is one way we can separate over three hundred different species.  Sometimes, they let out a whistle. Some also sing.

Hummingbirds are very small, from two to eight inches long.  Hummingbirds have no sense of smell but have very good eyesight.

Hummingbirds have a special ability to fly not only forward but also straight up and down, sideways, and backward and to hover in front of flowers as they obtain nectar and insects from them.  Hummingbirds have a long slender bill to feed off the nectar.

Hummingbirds only live in the New World.  They are migratory birds.

Hummingbirds are known for their very small size.  If you want something that symbolizes something tiny, hummingbirds would be a good choice.

Hummingbirds, however, are like Scrappy Doo in the Scooby Doo cartoon.  They do not let their size get in the way of showing off and being aggressive.  Hummingbirds will attack jays, crows, and hawks that infringe on their territory

Hummingbirds are feisty creatures, constantly fighting over choice flower patches and feeders. They have showy aerial battles, often for show, but with a lot of chattering and squealing.

Hummingbirds can symbolize aggression, courage, and just plain showing off.

Hummingbirds can represent energetic little children, full of energy, and tiring us out without seeming to ever be tired themselves.

Hummingbirds can symbolize speed.  They also symbolize how we often are never truly at rest, our lives a matter of rushing through one thing or another.  The proverbial “rat race.”

They also symbolize how life can be fleeting.  Before we know it, things have sped along, and life has passed us by without truly being able to enjoy it.

Hummingbirds remind us about the wonders of nature.

Nature has many wonders, including among the 18,000 or so bird species out there, but hummingbirds are pretty special.

Hummingbirds amaze with their agility, courage, diligence and hard work, full of energy and good health, and beauty.  They especially symbolize the natural wonders of the Americas.

Hummingbirds are often important pollinators of many types of flowers.

Hummingbirds mate after returning from migration and when the weather is warm enough to enable plants to grow, providing a reliable food source.

Male hummingbirds are basically players; they mate and move on.  First, the male birds show off to impress the females, who choose their mates.  A touch of female empowerment.

Females usually show interest by pointing their bills at him. But when she isn’t interested or ready, the female flies away.  After mating, males do not help the female in any way to build her nest or care for her chicks.  They just wait for the next female who enters his territory.

You can decide how much all of this reflects human mating.

Hummingbirds, like cardinals, are native to the New World.  This makes it logical that Native Americans have developed a range of beliefs about them.

The Aztecs flourished in Central Mexico from the 1300s to the 1500s with warfare an important part of their culture.  Their war god was named “Huitzilopochtli” (Hummingbird of the South). Aztecs believed Huitzilopochtl was the god of the sun, warfare, military conquest, sacrifice, and the patron god of Tenochtitlan, their largest city.

The diverse qualities of the “Hummingbird of the South” reflects the beliefs of other Native Americans.  Hummingbirds were often portrayed as helpers, the mystical source of fire, and messengers to the afterlife.  Some people might even come back to earth after death as a hummingbird.  They also could be symbols of royalty and different clans.

Hummingbirds were the source of many stories and myths in Native American culture.

We have seen how hummingbirds are nature’s wonders.  This makes them quite appropriate for religious imagery as well.  The wonders of nature easily move into the wonders of God.

Some believe hummingbirds are God’s messengers, the angels of the bird world. The little hummingbird seems almost like Tinkerbell, little fairies or sprites of the sky.

The speedy, full of life hummingbird also can symbolize joy and enjoying the life God gave you.  They also are a reminder to remember to enjoy the little things.

One researcher called the hummingbird “a perfect jewel.”  They speed along, small but with distinctively large bills, colorful bursts of energy.  Some put out feeders to attract them:

Like most birds, they’re pretty picky about the habitat they choose for nest building, and generally prefer being near water, whether a stream, wetland or lake. It’s always so rewarding to discover a pair of young hummingbirds (short bills, short tails, greenbacks) exploring feeders and flowers in the late summer, even if you hadn’t been aware of a nest. So, I’d advise giving nectar feeders another try.

Hummingbirds might be “speed demons,” but they are one of nature’s special blessings.