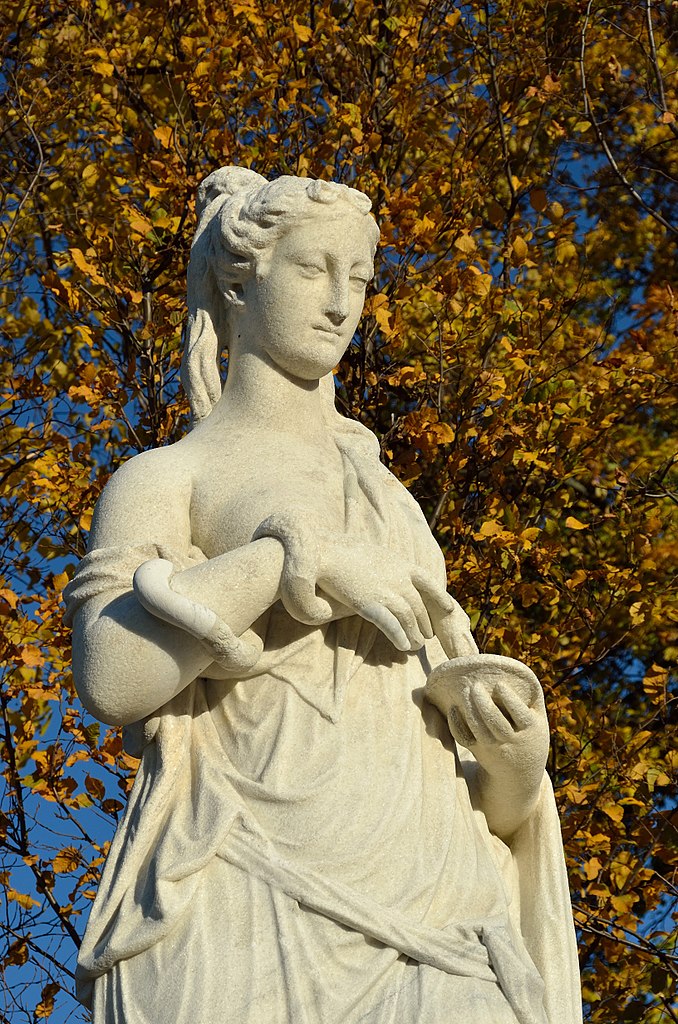 Asclepius, the Greek god of medicine, was the patriarch of a wider medical family. His daughter Hygieia, his top assistant, was famous on her own.  She was the goddess of hygiene and cleanliness. The Bowl of Hygieia became the symbol of pharmacies.  It’s no surprise that many health symbols include this family’s members.

I swear by Apollo Healer, by Asclepius, by Hygieia, by Panacea, and by all the gods and goddesses, making them my witnesses, that I will carry out, according to my ability and judgment, this [Hippocratic] oath and this indenture.

The original Hippocratic oath, the ethical “do not harm” promise taken by physicians, referenced various Greek gods and goddesses.  Apollo is the most familiar while the other three are a father and two of his two daughters.  The Asclepius family’s business was medicine.

Hygieia has an impressive pedigree, especially if you are a fan of the Ancient Greek gods.

Her grandfather was Apollo, himself associated with, among other things, medicine.  The famous Delphic oracle was also dedicated to him, showing his gift of prophecy.  Many health symbols depict this family.

Apollo’s son was Asclepius, of the Rod of Asclepius fame.  He was the Greek god of medicine, his shrines serving as early healing centers.

Asclepius married Epione.  Epione’s name means “soothing” and she was the goddess of soothing pain.  We know little about her, but there is evidence she had her own cults in places like Athens.  So, perhaps Epione was also honored independent of her more famous husband.

Hygieia is one of five daughters of Asclepius and Epione.  Her sisters were Aceso, Aglaea, Iaso, and Panacea.  Her brothers were Machaon and Podalirius.  Sometimes, myths tend to be inexact about details, family details like the number of her brothers and sisters differ.

There are various spellings of her name, including Hygiea or Hygeia.  All have a lot of vowels, which would require multiple purchases on Wheel of Fortune.

Hygieia was the chief assistant of her father. Asclepius’ daughters each represented an aspect of health.  Her importance is suggested by the reference to her as the wife of Asclepius!

She was best known as the goddess of health, cleanliness, and sanitation.  Hygieia also became known for preventive medicine and mental health.

And, yes, the word “hygiene” arises from her name.

Hygieia is also often associated with the patron goddess of Athens, Athena, known for her wisdom.  One name of Athena (given by the Ancient Greek historical Plutarch) was “Athena Hygieia,” an example of mixed references to “Hygieia” early on.

Hygieia was first honored as a separate cult figure around 400 BCE, her traits especially important during a major plague that struck Athens, a central city of Ancient Greece.

Hygieia became a popular goddess, multiple Greek sculptors are known to have made statues in her honor and her shrines were found in many cities.  She also became a popular subject of art, portrayed as a virgin dressed in a long robe, with the expression of gentleness and kindness.

Pythagoras, the Greek mathematician who created the famous theorem, used her name (“health”) as a greeting.

Hygieia, like her dad, is associated with snakes.  A snake is often wrapped around her arm or torso.   She also often appears to be feeding the snake from a bowl.

Her dad, as you might recall, is often recognized by the Rod of Asclepius. This symbol of medicine is portrayed by a snake slithering around a rod.  Hygieia has her own symbol, the bowl of Hygieia.  This is represented by a snake wrapped around a bowl or chalice.

A “chalice” is basically a fancy bowl, often used in religious ceremonies.  The bowl of Hygieia, a goddess, became the symbol of pharmacies.  Later, the mortar (a bowl) and pestle (stick used to grind stuff to make medicines) was also used as a well-known pharmacy symbol.

There is a well-known proverb that cleanliness is next to godliness.  Cleanliness is associated with morality and sexual purity.  It’s not surprising that the Greeks have a goddess of cleanliness.

It is appropriate that Hygieia was known as her father’s top attendant and assistant.  Cleanliness and hygiene are essential aspects of health and well-being, even if Ancient Greeks were not knowledgeable about microbes and germs.  Hygieia is rightly a top symbol of health.