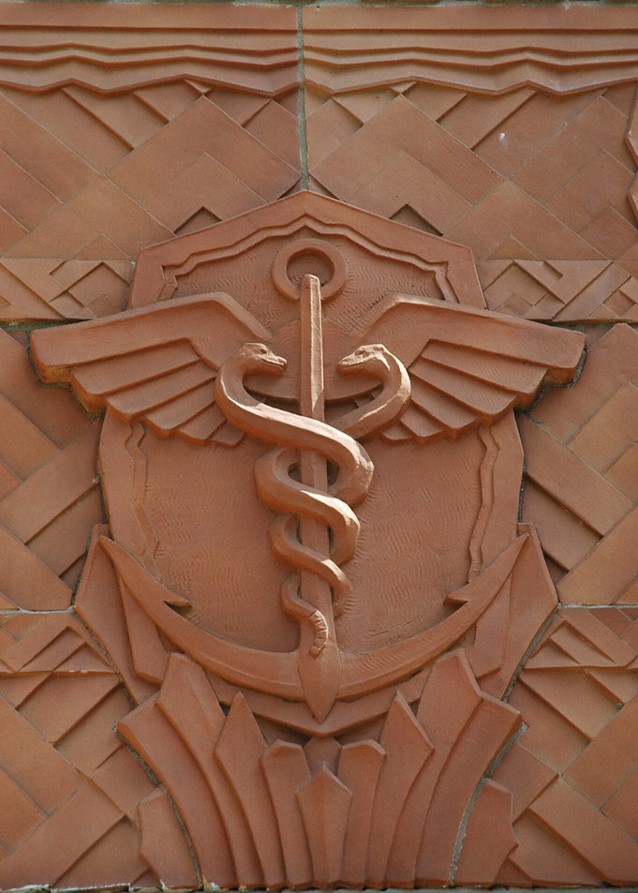 The Caduceus (“herald” in Greek) was originally a symbol of Hermes, the messenger of the Greek gods. A symbol with a winged top and two snakes around a staff, it is often confused with the rod of Asclepius. While the Caduceus is associated with medicine in various ways, it also has many other symbolic meanings beyond the health field.

Hermes was the messenger of the Greek gods.  Romans gave him the name “Mercury.”

He was fast (swift of foot, to be fancy) and that quality gave us the name of both a planet and an element.  The planet Mercury was viewable to ancients as a twinkling star, which quickly moved across the sky.  Thus, the planet became associated with the god Mercury.

The element Mercury is commonly in the form of a shiny liquid.  This “quicksilver” again was associated with the god Mercury.  And, the word “mercurial,” someone who is quick to change their mind also comes from our friend, the messenger of the gods.

Both the planet and element Mercury have long been represented by a special symbol (☿), which arises from the symbol of Hermes himself.

Hermes and Mercury also were associated with other occupations, each in some fashion related to the traditional messenger function.  Messengers, for instance, do not only take messages to people.  Hermes traditionally carried a purse, which can carry objects too.

Thus, they were identified with travelers and traders, who were one of the few people who regularly moved from place to place long distances.  One form of “messengers” would be printers, and in medieval times, the symbol of Hermes was used as “printer marks.”

Another more unsavory connection was thieves and outlaws, traveling with no established official home.  Hermes was said to be a little scamp as a child, stealing cows from his brother Apollo.  They made up and Hermes gave Apollo the lyre and received a nice staff in return. “Staff” here means a type of rod often a symbol of authority, such as a bishop’s staff.

Mercury might have originally been a god of commerce, thus the word “merchandise.”  Mercury’s association with Hermes came later, as Romans adopted various Greek gods as their own.

Hermes and Mercury also were also eventually identified with alchemists, who tried to change cheap metals like lead into precious metals like gold.  They worked with the element mercury, which was believed to have special powers.  The liquid silvery substance does look magical.

Alchemists were early scientists and many were also pharmacists and physicians, all who worked with potions and medicines.  Logically, the symbol of Hermes began to be health-related.

This full understanding of the many things Hermes was associated with will hopefully help us understand the nature of the caduceus symbol.

As I write this, it is not the Christmas season anymore (though it is the Chinese New Year), but a familiar Christmas carol can help us understand the fancy named “caduceus” health symbol.

The word “caduceus” comes from the Greek word for “herald.”  A caduceus is a fancy word for the staff or wand of a herald.   A what?  Hint: “Herald” is often the name of a newspaper.

A herald is just a fancy name for a messenger, someone who announces the news.  You might also see the word pop up in Shakespeare and other contexts. A caduceus is what Hermes/Mercury held.  As you might recall, it wasn’t too long ago, they were messengers.

The current caduceus symbol has a rod in the middle, a winged top, and two snakes slithering around the rod.  The winged top makes sense since Hermes flew around (proverbially and actually) very fast on his rounds.

The rod or staff also makes sense, especially since it was a basic sign of authority.  We saw this with the rod of Asclepius.  Hermes was sensibly associated with the traditional symbol of heralds, which originally did not have much to do with snakes.

But, what is with the snakes?  In fact, the snakes had led to various confusion over the years, with the caduceus often mixed up with the rod of Asclepius (rod with one snake, no wings).

The snakes probably were not originally part of the symbol.

Snakes long had symbolic significance in many eastern and Mediterranean cultures, including with medicine-related connotations.  Apollo, associated with medicine and snakes, was Hermes’ brother.  Also, it might be notable that Hermes’ staff originally appeared as a wand with entwined ribbons, which eventually became the modern caduceus symbol with snakes.

Various stories arose to explain Hermes’ snakes.  Hermes, so one story goes, came upon two snakes, tossed his staff at them, and they slithered around it.  Maybe, the snakes were fighting, and Hermes by doing so brought peace.  The symbol of two snakes began to symbolize peace.  A Roman official called a “caduceator” negotiated peace treaties.

The snakes probably were common in other cultures and were absorbed into Hermes myths.

Read about other symbols here.

1n 1856, the caduceus symbol was used by United States hospital stewards and stretcher-bearers to indicate their non-combatant status.

Perhaps, this is related to the traditional “peacekeeping” symbolism of the caduceus.  The “don’t shoot” red cross symbol was still a few years away; it was the caduceus symbol that was a familiar sight during the United States Civil War.

In time, the caduceus symbol was formally adopted as the insignia of both enlisted men and officers of the U.S. Medical Corps, including the Surgeon General.

The caduceus began to have a wider meaning as a general symbol of all medical caregivers with some confusing the caduceus and the rod of Asclepius.

I think it is appropriate that snakes, our slithering friends, are yet again associated with health.  There was a rather winding path to the modern association of the caduceus symbol with medicine.  And, maybe if physicians are associated with Hermes, they will do more house calls!