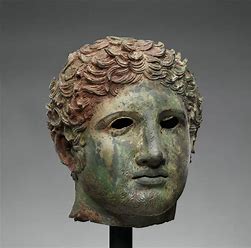 Here’s a heads-up: heads are important!  People might say “where is my head today,” meaning that they are absentminded.  But, try living without one.  You sort of won’t do very well.  All joking aside, the importance of the head has led to a lot of symbolism.  Get a “head start” here!

Heads are precious and special care is provided to protect them.  Hats, armor, and earmuffs are three ways used to protect our heads.

A head covering can be a symbol of special prestige with special symbolic meaning.  A hat can symbolize as much as offer protection such as a cowboy hat, a sombrero, or a variety of women’s headgear.  Each might be more of a symbol in fact than purely functional.

A crown is a special symbol of authority, and a special ceremony takes place when it is formally put on the head of the new king or queen.  Heads are often traditionally anointed with oil, both for royalty and members of the priesthood.

A halo, a circle of light above one’s head, is a sort of a celestial crown.  A halo is a symbol of holiness, which is often seen in artwork and other imagery involving Christian figures.  But, halos have ancient pagan roots, being part of Ancient Greek and Roman imagery.  Certain special individuals had a certain special aura, or divine energy, surrounding them.

Covering of heads also for some religious faiths and cultures is an important act of respect and proper conduct.  Jewish men, for example, might wear a yarmulke.  The Apostle Paul in the Bible suggests women should cover their heads in church.  Women not covering their heads was understood to be immodest.  A head covering or veil is, therefore, a symbol of modesty.

If you start early, you can get ahead of everyone else.  You can get a “head start.” The term first arose from those who got ahead a bit (maybe the length of one’s head) in a race.

Head Start is a federal program started during the 1960s.  It provides early educational resources to low-income families to help children to get a “head start” in life.

There is a stereotype of “headhunting” — the bloody type — being done by certain barbaric tribes.  But, the belief that the head is a form of “shorthand for the whole being,” and should be cut off for that reason, has been accepted worldwide over the centuries.

The display of human heads, particularly those the result of conquest, emphasizes the special symbolism they provide.  Human heads do not only show the power of the warriors who successfully obtain them, but provide a warning to others.

The biblical story of Judith beheading the Assyrian general Holofernes is the subject of many works of art, often consisting of Judith holding the severed head.  Artemisia Gentileschi, the famous medieval artist, has a famous painting of the very act of beheading him.

Over time, “headhunting” also obtained a much more benign meaning.  “Headhunters” now seek out talent — with their heads still attached — for a range of purposes.  The “head” still symbolizes the whole person, but the (if still cutthroat) process is much less bloody in nature.

Over the years, there were many folktales about a man or some sort of creature trying to find their missing head.  The headless creature often galloped around on their horse, in some cases actually holding their severed head.  The headless horseman often symbolized evil and/or death.

A particularly American version of this story is told in the Story of Sleepless Hollow by Washington Irving.  In this story, the headless horseman was a Hessian (German) soldier beheaded by a cannonball in the Battle of White Plains during the American Revolution.

He was buried, but arose as an evil ghost, ever trying to find his missing head.

Head Symbolism Without the Skin: Skulls

Skulls, the bare bones of a head, also have important symbolic meanings.

Skulls represent deadly things.  The skull and crossbones is a standard warning that something is dangerous or is a poison.

It also became the symbol used on pirate ships, to promote terror.  Often nicknamed the “Jolly Roger,” the pirate skull and crossbones flag also became a sort of “brand,” a symbol of pirates in general.  “Jolly Roger” might arise from the French words “pretty red,” for the red flag used by French pirates as well as the bloody nature of the pirates’ business.

Skulls are the remains of the dead.  A famous Shakespeare scene involves a soliloquy, a speech by Hamlet (“Alas, poor Yorick!”), as the character is holding a skull.  A mass grave has many skulls.  This often symbolizes the horrors of war.

There are many sayings involving “head,” such as “head and shoulders” above everyone else (much better), “to want someone’s head on a platter” (punished), and “having your head in the clouds” (fantasizing about something).

A common slang term that is hundreds of years old is the use of “head” or “hit the head” to mean a toilet on a ship.  This seems a bit harder to understand.  But, it’s pretty easy — the “head” of a ship is the top or forward end.  And, this was a commonplace to put the toilet, where splashing water provided an easy method of cleaning things up.  Aren’t word origins, etymology, fun?

Thomas Jefferson wrote a famous letter to Maria Cosway, a woman he met while U.S. minister to France.  The letter has a passage that is often known as the “A Dialogue between the Head and Heart.”  Jefferson pines for Cosway, a married woman, and struggles to retain a sense of reasonableness (his “head”) in spite of strivings of emotion (his “heart”).

The “dialogue” symbolizes the importance given to reason and intellect by Jefferson himself and others during the Enlightenment.  Many feared the passions of “the heart” would cause people to act recklessly.  The intellect, the head, was the ideal.

Often, and this is still true to some degree, “the head” was seen as much more manly while “the heart” was coded as feminine.  Of course, everyone has both!

The head offers a wide range of symbolism.  The importance of the head is so well accepted that sometimes it is felt “two heads are better than one.”  And, carefully protecting the head is important.  On other hand, a head away from the body is scary, including a skull.