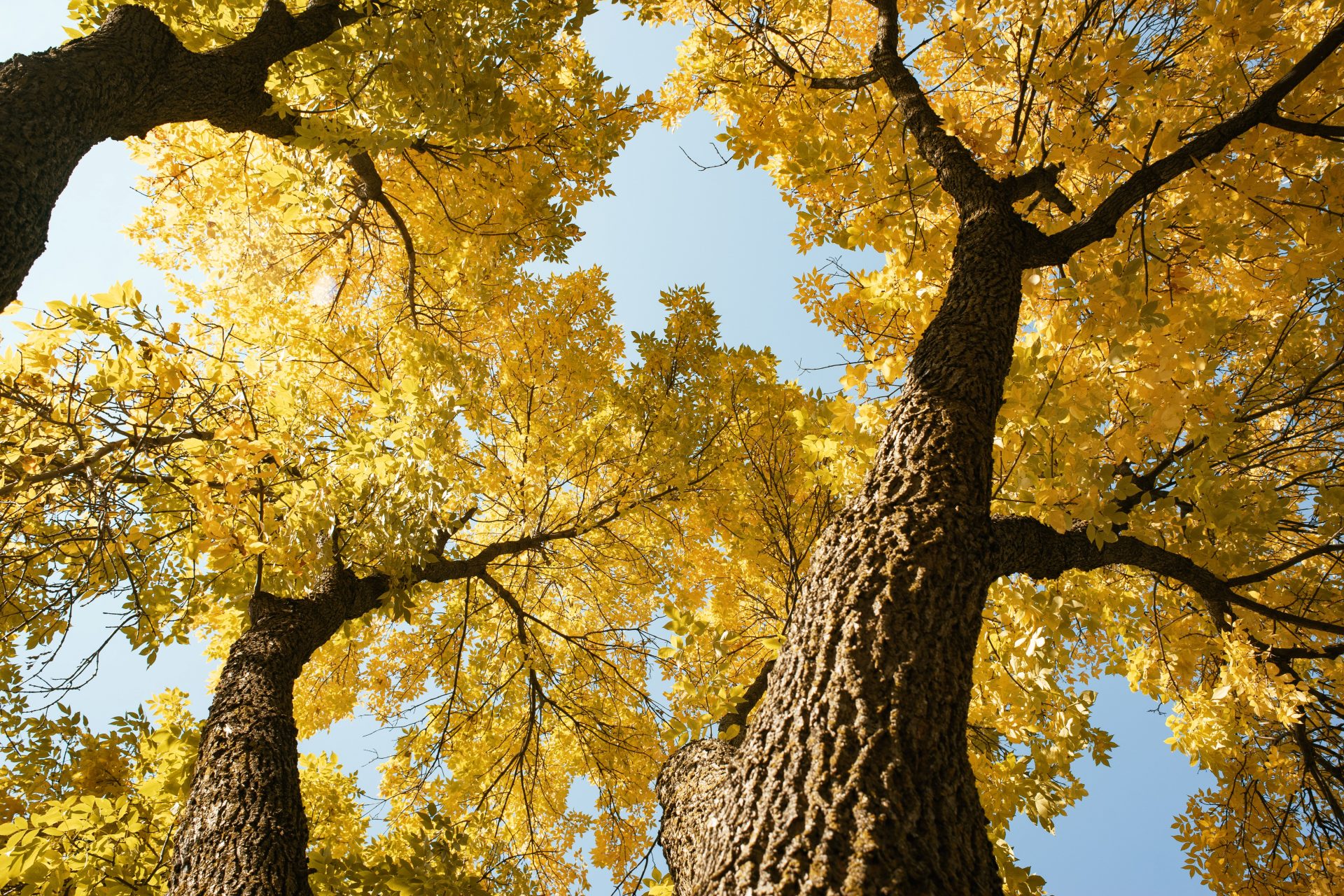 Elms are large shade trees which are deciduous (lose leaves regularly). Elms from ancient times were popular ornamental trees. Elms are good for the environment and have many uses such as food for livestock. Elms symbolize everyday life, the Underworld, peace and comfort, and victory. Elms also have a special place in Japanese life.

Elm trees are staples of North American landscapes.  It is not surprising that when a horror movie wanted to symbolize Main Street America, elm trees were used.  Elm trees have been important and full of symbolism from ancient times.  Let’s dig in. It won’t be scary at all!

Elm trees are large shade trees with round, serrated leaves (like teeth) that usually are rough like sandpaper.  American elm trees are likely to have leaves 3 to 6 inches long.

Elm trees are “deciduous,” which means they regularly lose their leaves. A Christmas tree, in comparison, is an evergreen, which means the leaves remain all year long.

There are thirty-five species of elm trees across North America, Europe, and Asia.

For more on the symbolism of trees click here.

What Are Elms Used For?

Elms, which can grow one hundred feet tall and seventy-five feet wide, are popular for landscaping.  From Ancient Persia to Europe and the United States in the last few centuries, elm trees were popular “ornamental trees.”  Trees basically used to decorate the land.

Elm trees are also environmentally valuable.  A single elm tree in Central Park (New York City) can absorb more than 48 pounds of carbon dioxide from the atmosphere, converting it into oxygen.  This allows us to breathe easier and be cooler.

Elm trees also can be used for energy and compost, the leafy branches used to feed livestock, and elm bark is actually rather nutritious for humans too.

Elm bark also was chewed or boiled into a liquor to treat colds and sore throats, while the boiled bark was also used to treat burns.  Ancient Romans also used them to help hold up vines while growing grapes to produce wine.  Wine also has its medicinal (and truth-telling) functions.

Elms Are Symbols Of Everyday Life

Elm trees have long been a basic symbol of life in America, although Dutch Elm Disease reduced their numbers in the 20th Century.

The Liberty Tree, for instance, that became a symbol for American resistance to Great Britain before the Revolutionary War was an elm tree.  A symbol of the average patriot.

The large size of elms made them ideal landmarks and boundary markers.  Preachers spoke underneath them.  Someone might goof off underneath their shade.

“Elm” is a popular street name.  It is again not surprising that Nightmare of Elm Street took this particular tree for its title.  The name brings up an image of an ordinary community, who suddenly deal with horror.  Elms symbolize everyday life, particularly in the suburbs.

“When the elm leaf is as big as a mouse’s ear, then sow barley never fear”

Elms, which are large shade trees with many uses, have many positive meanings.

Elms can symbolize peace and comfort, arising regularly in pastoral poetry to express charming images.  The citations of elms in the Bible fit this theme, including “under oaks and poplars and elms, because the shadow thereof is good.”

Elms’ connection with vines and grapes also means elms can have Christian symbolism.  The “blood of Christ” is symbolized by the fruit of the vine.

Elms were associated in Ancient Greece with the underworld.

The first reference of elms in Greek literature was an account of them being planted at the tomb of Achilles, the great hero of The Iliad.  The wood of elm was traditionally used to make coffins.  I promised this wouldn’t be scary, but I still need to toss that in!

Celts, who eventually lived in Ireland, also associated elms with the Underworld.  Elves, burial mounds, and entry ways to “Down Under” were all associated with elm trees.

But, witches were said not to like elms.  There is a “wyche elm,” but the name does not come from the witches with brooms.  The Witch Elm is also the name of a mystery novel.

Trivia: A word that is spelled the same but has different meanings is called a “homograph.”

Elm trees are familiar sights in many Asian countries.   Elms are particularly symbolic in Japan.

In Japan, “taiko” is a general term used for drums. Taiko has been an important part of Japanese culture from ancient times, from military use to religious ceremonies.

The pliant nature of elmwood makes it a favored choice to make the barrel of the drum.  It is believed to be the best substance to obtain a full, rich drum sound.

The Japanese Ainu people also use the bark of the elm tree for a distinctive cloth.  One myth holds that the chief goddess of the Ainu people herself was the child of an elm tree.

Elms in American life provide a variety of lessons.

Elms were familiar parts of everyday life.  But, eventually, tragedy struck, and Dutch Elm Disease severely hit the elm population in America. In recent years, there has been a re-emergence of elms.  All the same, it shows the frailty of life.

Might Dutch Elm Disease be a foreshadowing of COVID-19, a reminder of the danger that lurks among our apparently safe existence?