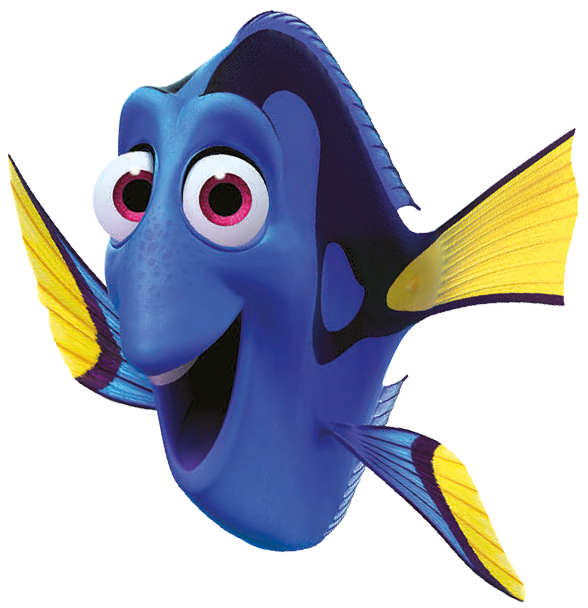 For those who might have a bad memory, this sums up the plot of Finding Nemo:

Nemo, an adventurous young clownfish, is unexpectedly taken from his Great Barrier Reef home to a dentist’s office aquarium. It’s up to his worrisome father Marlin and his friendly but forgetful regal blue tang fish Dory to bring Nemo home[.]

Dory, voiced in the film by Ellen DeGeneres, was so popular that she later got her own film (Finding Dory).  Any character that appeals to viewers usually also has various meanings and symbolism.  And, Dory does have a lot of symbolism.  Read on and check back if you forget.

Dory, daughter of Charlie and Jenny, is a regal (royal) blue tang fish.

Real-life Dory fishes live in warm waters in the Indo-Pacific Ocean and can grow up to 12 inches (31 cm) long.  These fishes are important to the health of coral reefs because they keep algae in check.   The flesh has an odor that makes them not ideal for human consumption.

The actual Dory fishes are high maintenance, needing special care.  So, the charms of Dory aside, they are not really ideal for your own personal aquarium.

Dory has a pleasant personality. Dory is ditzy, but also intelligent, able to understand both humans and whales.  Her ditzy side is emphasized because she has short-term memory loss.

Finding Dory shows us that she was raised in Jewel of Morro Bay, California.  Dory was separated from her parents when Dory looked for a shell to cheer up her mother.  But, her memory loss makes Dory forget them. She later remembers and reunites with her parents.

A “dory” is a common name for a fish.  Dory herself has her own unique personality and story.

Dory has a serious case of short term memory loss.  Short-term memory loss is when you forget things that have happened recently, such as an event or something you did, saw, or heard.  The film Memento shows how that can have serious movie plot implications!

This makes her seem ditzy and Dory is used as comic relief.  But, Dory’s memory loss also symbolizes more serious things.  For instance, Dory has separation anxiety because if she is separated from someone, she might not remember them.  She even forgets her parents.

The sequel emphasizes some more that her condition should not be used to stereotype her as “ditzy” and not intelligent.  This symbolizes the importance of not letting disabilities define people.  Dory, for instance, is not just a silly dumb fish.  She has many talents.

Marlin, Nemo’s dad, underestimates Dory.  Dory symbolizes how we do that too often.

Able To See The True You

Dory is a pleasant companion, optimistic, and supportive of your needs.  Dory also is able to see good in each individual.  (I am careful not to say “person” in a film about maritime life.)

Dory might be optimistic in part because she is forgetful, so is not able to remember the bad things.  But, she also is able to see the good in others in the process, not having presuppositions based on certain things they did.  We often focus too much on specific things, without seeing the whole story.  Dory’s forgetful nature helps her ironically see things more clearly.

Dory also has the ability to understand not only other fish, but whales, and even humans.  She can also communicate with whales.  Dory symbolizes the ability to relate with a diverse group of individuals.  She is not biased against people unlike herself.  Jellyfish stings are a turn-off.

This helps her to be very friendly and warm-hearted (if cold-blooded).

Dory is brave, fearlessly putting herself into danger during her adventures.

Again, we might think through why this might be so.  Dory’s short-term memory loss can help here because she can experience danger and then forget about the details.

Bravery here includes some naivete, not knowing the true danger that awaits.  That can be really dangerous.  Dory also symbolizes not fully understanding the whole picture.

Dory also is brave because she is good and is willing to help others, even if it puts her personally in danger.  Dory also shows a ruthless side, threatening a crab to obtain information.  This again shows that Dory should not be stereotyped as merely a ditzy, silly fish.

FOR MORE ABOUT THE SYMBOLISM OF DISNEY CHARACTERS CHECK OUT THIS ARTICLE.

Dory in both films goes on a type of adventurous quest, a type of story where characters go on a long journey, with many complications, usually involving the characters learning something along the way.  Dory was a companion in the first film; the focus of the second.

Dory symbolizes the path to self-discovery, which is sometimes quite an adventure, with some dangers along the way.  Dory herself re-discovers her parents in the sequel.

Dory might be somewhat naive and childish because she lost her parents prematurely.  She is not able to grow up properly, not having parental guidance.  But, the film shows us that even what seems to be lost might be found.  This symbolizes hope and life’s potential.

Dory symbolizes caring for others.  Dory is concerned for the needs of others, not just those just like her.  And, she is willing to go the extra mile to help them.

Finding Dory also symbolizes parental love, Dory’s parents continually looking for their daughter after she was lost. And, again, Dory was lost in the first place because she saw her mother crying, and wanted to do something to help her.

Caring for others includes caring for yourself.  Dory’s own needs also are addressed.

READ ABOUT THE SYMBOLISM OF OTHER BELOVED DISNEY CHARACTERS:

Marlin searches for his son and meets Dory, our charming blue tang fish, who is deeper than first impressions suggest.  In the depth of the ocean, Dory symbolizes a range of things.  And, if you think you might forget about them, just bookmark this page to help you remember.

Pigeons have had a special role in human civilization from the very beginning.  Pigeons are messengers, food, religious sacrifices, and used for sport.  Pigeons also symbolize the poor,...