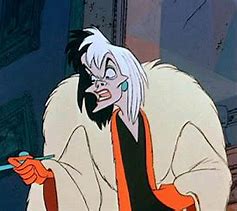 Cruella de Vil is the villain in the 101 Dalmatians stories. She symbolizes evil, cruelty, the excesses of wealth, compulsions, and fashion. Cruella still attracts viewers, her power and rebellious nature having its appeals. This appeal adds more complexity to the character.

Long before the Devil Wears Prada, a fashion icon with a sense of style existed by the name of Cruella.  She did not just want to get those puppies.  There is a lot more to her than that!

Cruella first arose in a 1956 children’s novel, The 101 Dalmatians.  Her familiar skunk (black and white) hair, cruel nature, and wealth were all there. She had a particularly creepy family, including a serial killer grandfather and rumors of demonic ancestry.  Talk about evil.

Things are toned down a bit in the first animated version of the book.  Cruella’s evil nature is no longer a sort of family curse.  She still has a compulsion to get the fur of dalmations, willing to “get those puppies” (and two adult dogs) in any way possible to make a coat out of them.

Cruella in the live-action version of the story (portrayed by Glenn Close) is a successful fashion magnate.  She is not as much of a mere source of fun or as horrible to look at.

Cruella is a more recent live action film that provides some new details. In this version, Cruella’s real name is “Estella,” and is a young fashion designer. She takes the name “Cruella” and does have a dark side, willing to break the rules to get ahead.  Cruella’s negative feelings about Dalmatians is explained by some fierce dogs she encountered as a child that led to tragedy.

Cruella’s two basic qualities, her evil nature and wealth, are expressed symbolically in her name.

Her first name is a mash-up of “cruel” and “devil.”  Her last name, “de Vil,” can be a reference to an alias used by Dracula (the evil vampire) or an expensive car (symbolizing wealth).

Names are often very symbolic.  I myself was named after my grandfather.  And, “Joseph” has various other symbolic meanings, including multiple characters in the Bible.

Read about the symbolism behind other Disney characters here.

The two dalmatians, parents of a litter of puppies Cruella lusts after, in the animated film called Cruella “that devil woman.”  She is also known as a “witch” and as just plain evil.

Cruella symbolizes evil.  The book and some of its adaptations provide some reasons for why she is evil or has a dark side.  Sometimes, she just is.  Evil does not always have a deep reason.

Cruella’s evil is expressed by uncontrolled compulsions.  She has certain goals, including wealth, power, and a certainly spotted fur.

She is willing to do anything, legal or illegal, to obtain them.  Cruella doesn’t care about hurting others in the process.  She is both cruel and evil.

Cruella’s black and white hair can also symbolize the good and evil sides of her personality.  And, just as evil never really goes away, Cruella is never totally defeated. She returns for the sequel.

Cruella symbolizes fashion.  Cruella is evil, but she has a sense of style, including her white and black hair.  Cruella has talent.  She ultimately is the head of a fashion empire.

Fashion is an important way that we express ourselves.  People are impressed when a person has a good fashion sense.  It means they know how best to express themselves and often it means they have the money to do so in an expensive style.  Cruella impresses in this way.

But, her fashion sense is taken too far, including the cruelty of her fur fixation.  Fur is less accepted these days, even when not involving dogs.  The latest film is much less fur focused.

Cruella takes things too far, willing to do anything for fashion, and anything else she craves.

Her fashion sense is taken to such extreme levels (harming puppies), it is also a symbol of uncontrolled capitalism and greed.  At some point, it is not just uncontrolled, but crazy, though there is lately more of an attempt to explain her actions in a more rational way.

Wealth is not alone a problem in Disney films.  Films often are about princesses or people who wind up wealthy and successful in the end.  The owners of the two dalmatians, however, do not have much money.  Cruella does and is not satisfied.  She symbolizes the dark side of wealth.

Cruella is a symbol of someone with compulsion issues.

Like Ahab and his white whale in Moby Dick, Cruella just HAS to have those puppies, and is willing to do anything to get them.  The things that drive us to such lengths can be trivial or not (the young Cruella film makes her reasons quite reasonable), but it still is dangerous.

Cruella is a symbol of someone with a one track mind and the bad things that can result.

Cruella is an example of how evil characters can have a sort of thrill for the viewers.

Cruella has a twisted attraction. She is [crazy] fun, independent (the book has her husband taking her name, which was a big deal in the 1950s), and even a bit of a feminist.  Cruella runs a successful fashion business.  She is a role model for little girls everywhere. Sorta.

Cruella is evil, so the viewer does want her to get her comeuppance.  Still, she symbolizes a sort of attraction we have for those who break the rules, even while doing bad things in the process.

The appeal might help explain how Cruella is softened a bit over the years.  She becomes a more complicated, and sometimes more sympathetic, character.

Conclusion
There have been books, animated and live action films, and more about those puppies. 101 Dalmatians is a beloved story that has been told in many forms.  But, perhaps the true heroine, in a fashion, of the films is Cruella herself.  Does she not have more complexity than a puppy?

Pigeons have had a special role in human civilization from the very beginning.  Pigeons are messengers, food, religious sacrifices, and used for sport.  Pigeons also symbolize the poor,...