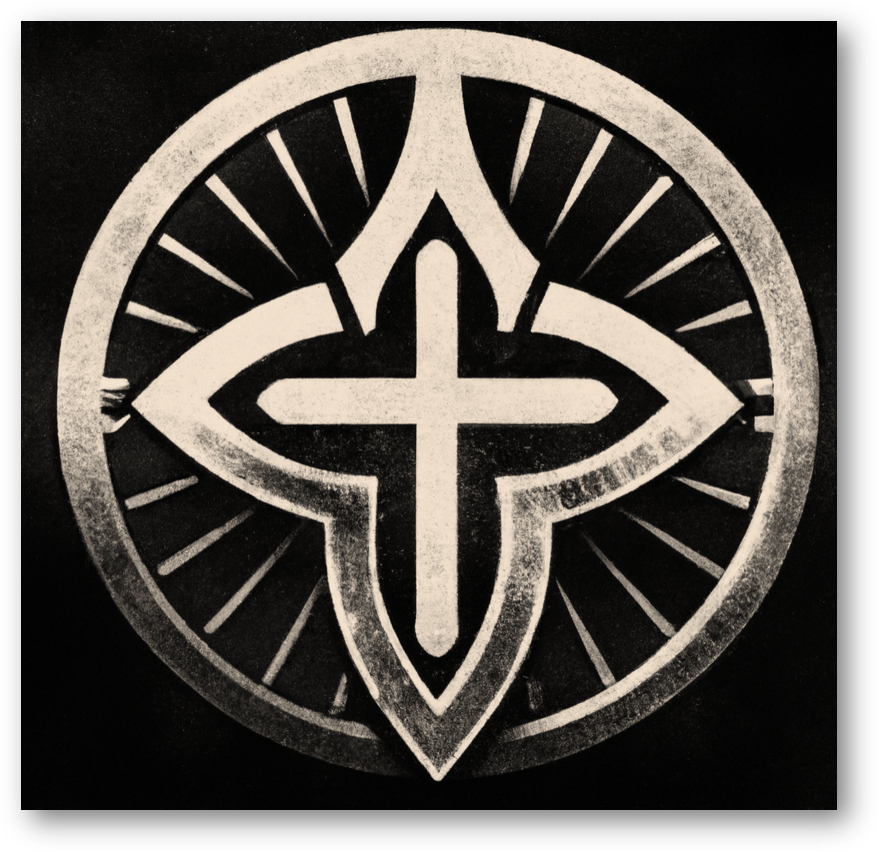 The triquetra, a figure with three connected arcs, is believed to have mystical meaning.  Three pieces connected with no end. The pagan symbol was adopted by Christianity to represent the concept of the Holy Trinity (Father, Son, and Holy Spirit). The “trinity knot” or Christian Trinity symbol was popular in medieval art, including the Book of Kells.  There are other symbols of the Christian trinity; the trinity knot is the most popular.

The television show Charmed concerns three sisters, each with different magical powers, but most powerful when working together.

This is the “power of three” and its symbol is the triquetra, a pagan three-pointed symbol representing unity and everlasting friendship.  In time, as with many Christmas-related symbols, it was adopted by Christians to represent their own beliefs.

A “triquetra” is Latin for “three-corned,” basically a fancy way to describe a symbol with three overlapping arcs.  The design is quite ancient, going back five thousand years.

It later was a popular symbol on early coinage in Lycia, a region now found in modern-day Turkey.

The symbol became particularly associated with the Celts, an ancient European tribe that arose in Europe and eventually migrated to England and Ireland.

The triquetra meant various things to the Celts, including as a symbol of life, death, and rebirth.  The cycle of life in one symbol.

It also could represent the land, sea, and sky.  Again, one symbol represents all of creation.  Another triplet would be the maiden, mother, and crone (wise old woman).  Again, the triquetra thus symbolizes a type of “trinity,” or three interrelated things.

Graham Greene’s “Monsignor Quixote” once tried to describe the concept of the holy trinity to his friend, a non-believing communist:

Two bottles equal in size. The wine they contained was of the same substance and it was born at the same time. There you have God the Father and God the Son and there, in the half bottle, God the Holy Ghost. Same substance. Same birth. They’re inseparable. Whoever partakes of one partakes of all three.

This might be as good as many explanations of one of the biggest religious mysteries.  But, I will try to summarize, if with a bit less poetic license.  Or, perhaps while a bit more lucid.

The Holy Trinity is a Christian belief that mysteriously there is one God who eternally exists as three distinct Persons — the Father, Son (Jesus), and Holy Spirit.

Jesus is believed to be “God made flesh,” or God coming to earth in human form. The Holy Spirit is a form of the divine that touches each one of us.  Jesus himself was filled with the holy spirit at his baptism.  Jesus, the Father, and the Holy Spirit are all made up of “divine stuff.”

Many scholars argue that the concept of the Holy Trinity itself took time to develop and was not present during the ministry of Jesus himself.  Nonetheless, we see the concept as early as the Gospel of Matthew, which ends with Jesus providing instructions on how to baptize new believers in “the name of the Father and of the Son and of the Holy Spirit.”

This does not mean you have to believe in the Holy Trinity (or simply the trinity, if you wish) to be a Christian. Not everyone who self-labels themselves as a Christian believes in this doctrine.

The old triquetra symbol is an ideal one to represent the Holy Trinity.  Three interlocking arcs represent three connected, but still somehow separate, persons of the divine.

The “Trinity Knot” was particularly a helpful way to teach the trinity to the Celts, who were already familiar with the symbol representing basic concepts of existence.  The symbol is most famously found in a medieval religious manuscript, the Book of Kells.

When you hear of the “Christian Trinity Symbol,” the triquetra is often what is involved.

There are various other symbols that represent the Holy Trinity.  “Borromean Rings” (named after an Italian family who used it as their coat of arms) are three interlocking circles.

The fleur-de-lis (“lily”) is a popular symbol used to represent many groups, including European royalty.  It was eventually adopted by the Boy Scouts and is found on their uniform.  The three-leaved symbols also symbolize the Holy Trinity.

St. Patrick supposedly used the Irish shamrock to teach the Irish about the Christian trinity.  The “four-leaf clover” is lucky since it is more rare than the more familiar three-leaved shamrock.  The more ordinary shamrock symbolizes the divine trio.

The Shield of the Trinity goes back to the 12th Century.  It is a type of visual aid in the shape of a shield that explains the concept of the Trinity.  A shield is also a symbol of protection, which gives the shield of the trinity an additional layer of meaning.

The triangle also is a symbol of the Christian Trinity.  The equilateral triangle is one of the oldest if not the oldest symbols of the Trinity.  It is a charmingly simple way to represent how each person of the trinity is equal and permanently interconnected.

There are many Christian symbols, including the cross, the fish, and the dove.  Each symbol was not suddenly invented by Christians.  Each symbol had its own meanings long beforehand.

It makes good sense that when finding symbols to represent a basic Christian doctrine familiar symbols were used as well, including the age-old triquetra.
The “power of three” continues to be honored, both by Christians and non-Christians up to the current day.   Just ask Piper, Phoebe, and Prue, or the new Charmed Ones.

link to The Balance Scale: a Symbol of Justice and More

Balance scales were first used as far back as 2500 BCE. They were important in the marketplace.  Balance scales symbolized business, order, fairness, and justice. The zodiac sign Libra is...