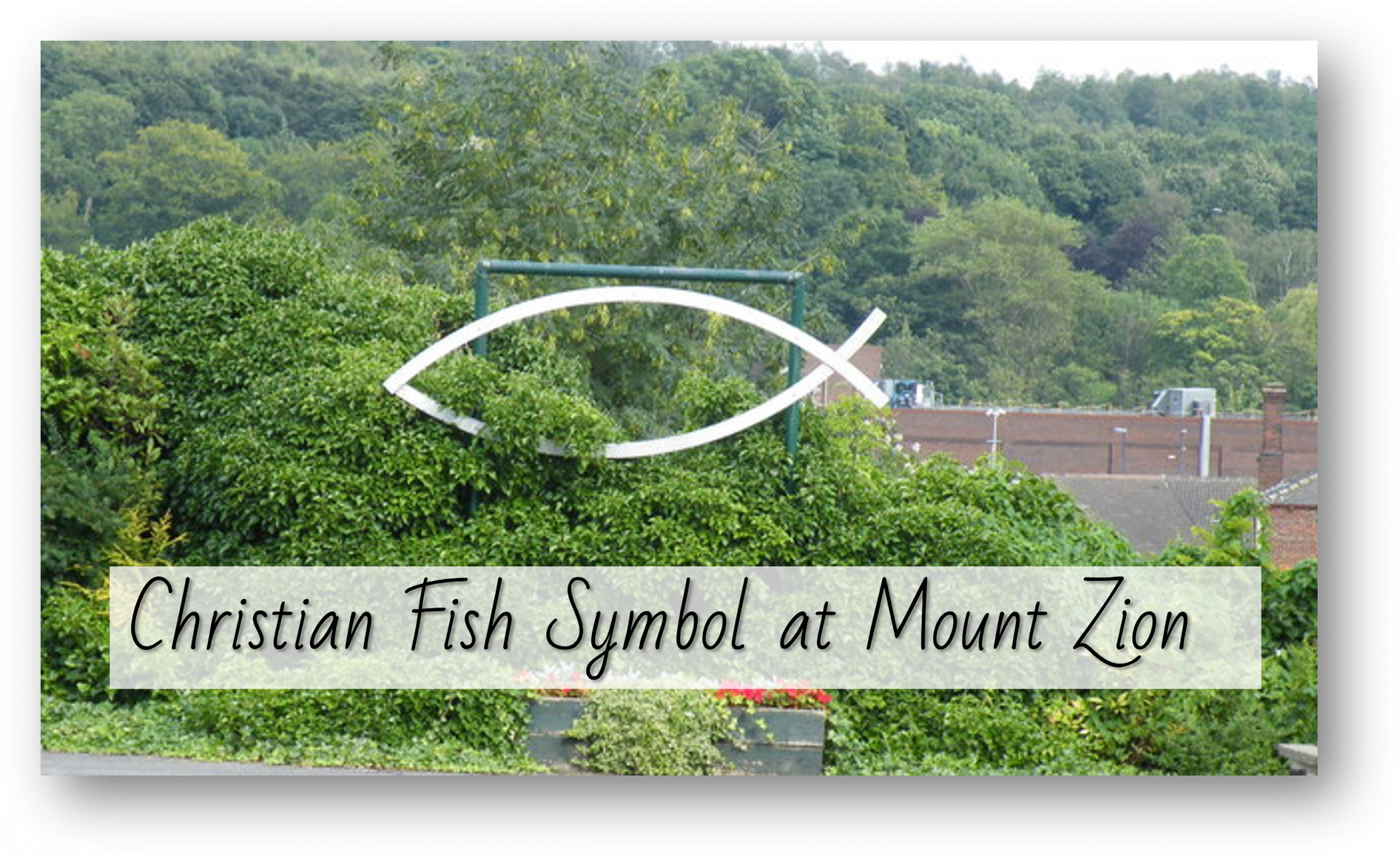 Fish have long had symbolic meanings related to water, fishing, and plenty.  Fish is also a popular Christian symbol, widely used in the gospels. The Greek word for fish is an acronym for a statement of faith that Jesus is the savior, helping the fish itself to become a Christian logo. The fish first was a secret way to tell others you are Christian. It later became a more open Christian statement. Some today use it against Christians.

I found this charm one day.  You also might have seen a similar representation of a fish, often without the “Jesus,” on a car bumper, on the cover of a Bible, or even as a tattoo.

Fishes have been symbols for a long time, long before “BCE” became “CE”

Fishes symbolized the sea, fishermen, and an important source of food.  The plentitude of fish symbolized fertility, luck, and multitudes.  Fish was also sometimes seen as a more humble food, something anyone can go out and catch.  Meat was often food only for the rich.

Fish was also a symbol of many ancient religions including Judaism and  Egyptian religions (including tied to the goddess Isis).  The Cult of Isis was one of the more popular “mystery cults” that were popular in the early days of Christianity.

My dad was in the building trades so I can relate to having a father who was a carpenter.  Jesus appears to have followed in his father’s footsteps before spreading his message of warning and redemption.  The twelve lead followers, apostles, he chose however were largely fishermen.

Peter, who Catholics believe was the first pope, was a fisherman.  Jesus told Peter and Andrew to “follow me, and I will make you fishers of men”   Jesus was a wiz at using imagery familiar to his followers.  His parables symbolically preached his message using familiar things.

Fish symbolism is found throughout the gospels, the accounts of the life of Jesus found in the Bible.  A few pieces of bread and fish miraculously fed a multitude.  A coin miraculously found in a fish’s mouth was used to pay a tax.

The story of Jonah being trapped in a “big fish” for three days was used as a type of prophecy of Jesus rising from the dead after three days.  Jesus was the modern-day Jonah:

Jesus ate fish after he rose from the dead to show he was not merely a spirit. And, an important statement of Peter’s authority is found at the end of the Gospel of John, and it took place while the apostles were fishing.  Jesus yet again used the fish to send his message.

READ ABOUT ANCHORS, ANOTHER CHRISTIAN SYMBOL

Fish also can symbolize baptism.  Baptism is a special sacrament in which a believer is cleansed of their sins and becomes a new person.  It is the entry point to becoming a Christian.  A person is dunked in water, symbolizing freeing you from sin.  Fish are closely associated with water.

Fish was an important symbol for early Christians.

The fish symbol itself, however, soon became a type of secret Christian logo.  The Romans often persecuted Christians.  Christianity eventually became the official religion of the Roman Empire (4th Century), but early on Christians were a troublesome minority who would not swear allegiance to the emperor as a god.  Christians often were forced to worship in secret.

A common secret sign of Christians was the fish. They can be seen as graffiti in catacombs, tombs used as meeting places for Christians.  By the 2nd Century, it was a familiar sign.

The Greek word for fish is conveniently an acronym for “Jesus Christ, Son of God, Savior.”  Greek was a popular language of the times and the New Testament was originally written in Greek.  The religion of Jesus, the new Jonah, was symbolized by a fish.

A fish symbol became a way to tell others you were a Christian without being too public about it.  A crucifix, for instance, is an obvious symbol of Jesus dying on the cross. Fish, however, was a simple everyday item.  It even had a mysterious meaning to pagan cults.

Fishes became a symbol of not only Christians but the dangers and strong faith necessary to be one among an empire of disbelievers.  Once Christianity itself became the official faith, fishes continued to be a sign that could be openly proclaimed.

Fish became an important symbol of Catholicism. Many Catholics remember, perhaps some still do, having “fish Fridays.”  Friday is the day Jesus died.  As a sign of faith and humility, you were not supposed to have meat on Fridays.  Some also gave up meat during Lent, the forty days before Easter.  Many Protestants did not do this; it was a Catholic thing.

The fish symbol itself remains a popular way to proclaim that you are a Christian.  I realize some argue Christians are persecuted these days, but that is a tad overblown. Still, people might want to show they are Christian in a somewhat low-key way. A fish is a good approach.

There is also parody usage.  For instance, some fishes instead of saying “Jesus” have “Darwin” as a sign that the person is a non-believer or an atheist.  There is also the “Eagle catching fish” symbol, which has an anti-Christian and at times racist message.

I never was a big fan of fish as a meal.  Fish for me was more of a creature of nature.  Fish also have become beloved cartoon characters, including the lovable forgetful Dory.

link to Unveiling the Hidden Symbolism of Buddha

Continue Reading
link to Fly Symbolism in the Bible

Flies were a familiar menace to the people of biblical times.  Flies were used against the Egyptians to force their leader to free the Israelites. A powerful pagan god was labeled “the lord of...