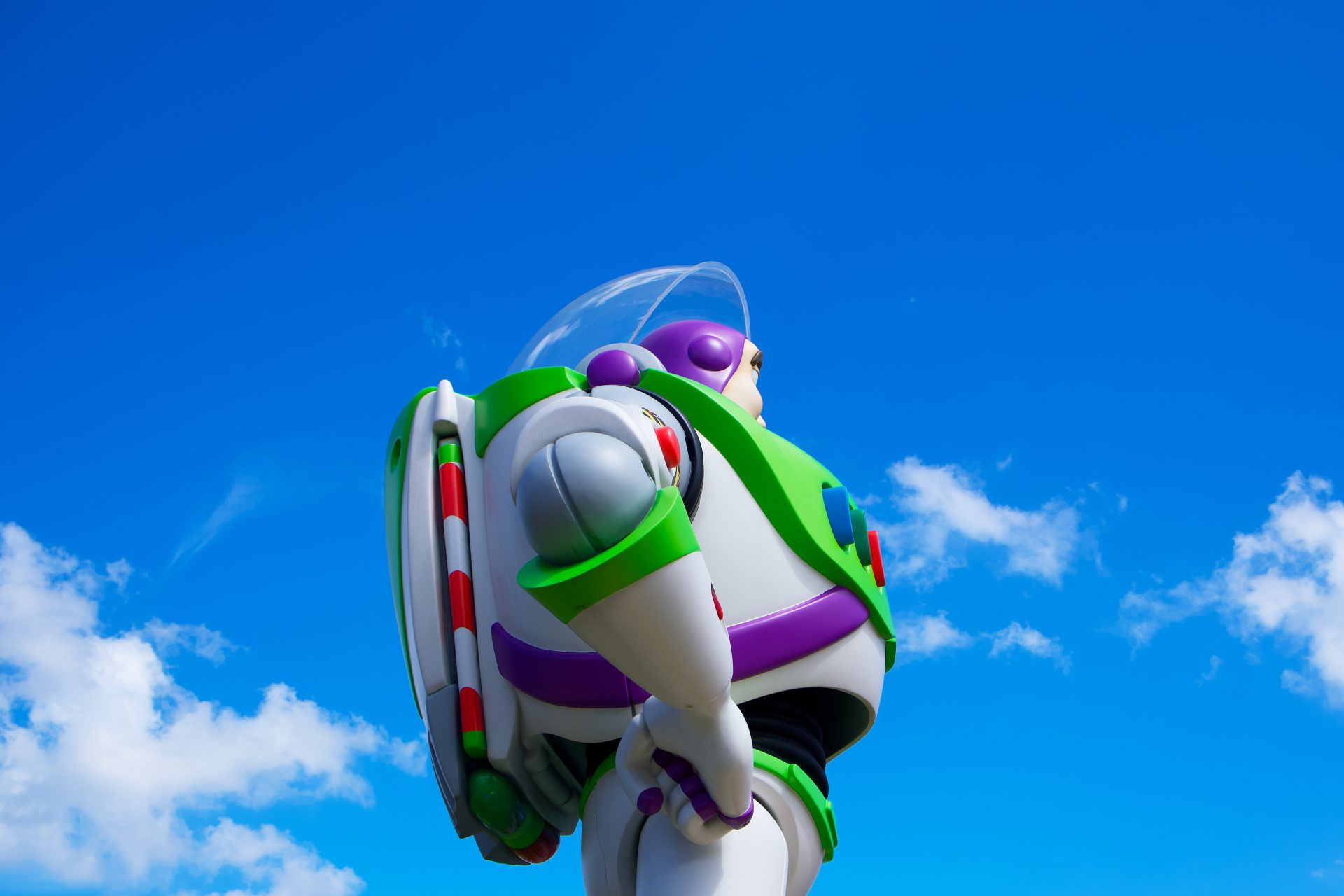 Toy Story is a beloved animated franchise.  People love it as much for its sense of imagination as its complex characters. Buzz Lightyear, a brash space adventurer, sets things into motion as a new flashy toy. Symbolizing a stereotypical somewhat clueless type, he undergoes a period of self-understanding much as does his new friend, Woody.

Many adults grew up watching the films and/or watching their own children grow up like the character Andy did in films.  Toy Story’s conceit (or is it?) is that children’s toys have their own lives when the children are away.

Andy Davis, a young boy at the beginning of the series, has many toys.  And, then he gets a new Buzz Lightyear spaceman action figure.  Buzz was the catalyst, the person whose entry led to reactions that drove the plot of the film.  Why?  Well, a lot of symbolism is a major reason.

Buzz Lightyear is a universal space ranger from the Intergalactic Alliance and the captain of the Alliance’s team.  He is bold and fearless, if not very self-reflective.

Buzz’s character has his own television program.  A new Pixar film telling his origin story is coming out soon, the details changing some from the actual television series.

Buzz himself, the character in the films, is one of many Buzz Lightyear action figures.  He was a birthday present to Andy, who was impressed along with the other toys with his accessories and flashy lights.  Buzz at first was not aware that he was not “really” a space ranger.

A basic thing the whole Toy Story franchise symbolizes is the power of imagination, especially of children.  Toys are tools for children to imagine wondrous things.

They have a range of adventures.  And, they are a way for children to prepare at their own level for adult roles.  Animals use play for such purposes, including a cat with a toy mouse.

Buzz Lightyear and the other toys have their own personalities and adventures.  Children often imagine that their toys have separate lives.  Toys can seem quite real.  Buzz having a life when Andy is not around symbolizes the imagined lives many children create for their toys.

We all have our toys, sometimes in the form of expensive things like flashy cars.  Toys are still especially played with by children.  They provide a chance to pretend and prepare for adulthood.

Buzz Lightyear symbolizes this, particularly being a “boy” toy.  Clearly, boys and girls can like space adventure toys.  Star Wars has many heroines.  The child here, however, is a boy and his two lead toys have a traditionally male quality.  Boys just love cowboys and astronauts.

Andy eventually stops playing with many of his toys, the most mature toy (Woody) remaining a special place in his heart.  Buzz is more a symbol of his boyhood, eventually put aside.

Buzz Lightyear at first does not realize he is “merely” an action figure, thinking he is an actual space ranger.  Buzz is also shocked to find out there are a bunch of other Buzz action figures.

Like Woody, Buzz has a type of identity crisis, while also discovering and accepting his true nature.  Buzz’s acceptance of the truth is not easy.  It shows the depth of the Toy Story franchise that such mature themes are examined among a story about self-aware toys.

Toy Story 3 plays with this idea some more, with Buzz forgetting his true nature, and even going into a Spanish speaking mode.  Buzz symbolizes not only self-discovery, but also self-delusion and ignorance.  There is a difference between pretending and believing in fantasy.

Woody is “basic.”  Buzz has all those bells and whistles.   Buzz symbolizes that sometimes that “flash” is misleading and covers up your true nature.

And, though we all start in a sort of “demo mode” like the Buzz action figure, in time, we experience the world in “play mode,” each having our own messy personal discoveries.

It is not surprising that a little boy like Andy would be impressed with such a character.  Woody, a more restrained, humble, authority figure, might not seem as “cool” or impressive.

Andy eventually still treasures Woody the most.  Plus, the “macho” spaceman turns out to be ignorant of his true nature.  Other toys trying to clue him in are dismissed as the silly ones.

Buzz’s dismissive tone repeatedly reflects a deeper sense of doubt he is trying to will away.

How much of Buzz’s whole personality is likewise more posturing than a reflection of his true self deep down?  Buzz symbolizes our tendency to resist what we find uncomfortable.

Buzz is voiced in the Toy Story franchise by Tim Allen, who plays various similar macho-type characters with similar qualities.  They also like to play with (G-rated) adult toys like tools.

Buzz symbolizes the willingness to explore and go into the unknown.  His motto is “To infinity…and beyond!”  Infinity is something limitless, such as the limitedness of space.

Woody symbolizes old-fashioned cowboys, shown by Westerns that portray life in the 19th Century Western frontier in America.  Buzz symbolizes the promise of space exploration and the wonders of technology.  He is named after Buzz Aldrin, the 1960s astronaut.

The Buzz Lightyear action figure is based on a character that has a lot of adventures in space.  Buzz in the films has adventures in more mundane places on Earth.  Finding out he is actually an action figure, Buzz needs to rely a lot more on his brains and friends for his adventures.

Buzz symbolizes friendship.  Buzz becomes Woody’s best friend and they continue to protect and give each other moral support throughout the Toy Story movies.

Buzz does not seem like a friend at first.  Woody is threatened by Buzz because it seems like Andy and the other teams want to replace Woody as the leader and favorite toy.

But, like many adventure stories, different people became besties.  Buzz’s openness to friendship with different types of people is also shown by his growing attraction to Jessie, the cowgirl.

Buzz is less comfortable out of his comfort zone here, but is better for it in the end.

Buzz and Woody continue to support one another.  Buzz also in the end knows when it is time to say goodbye to his friend, again because he knows it is the right thing to do.

There is something a bit dubious about that because “infinity” itself means a never-ending distance.  How can you go “beyond” that?

Buzz is not a deep thinker, however, so we should honor the basic idea.  He is willing to go into the deep unknown, bravely and without doubts.  After joining Andy’s toys, Buzz has many doubts.  But, still is basically loyal to his original programming.