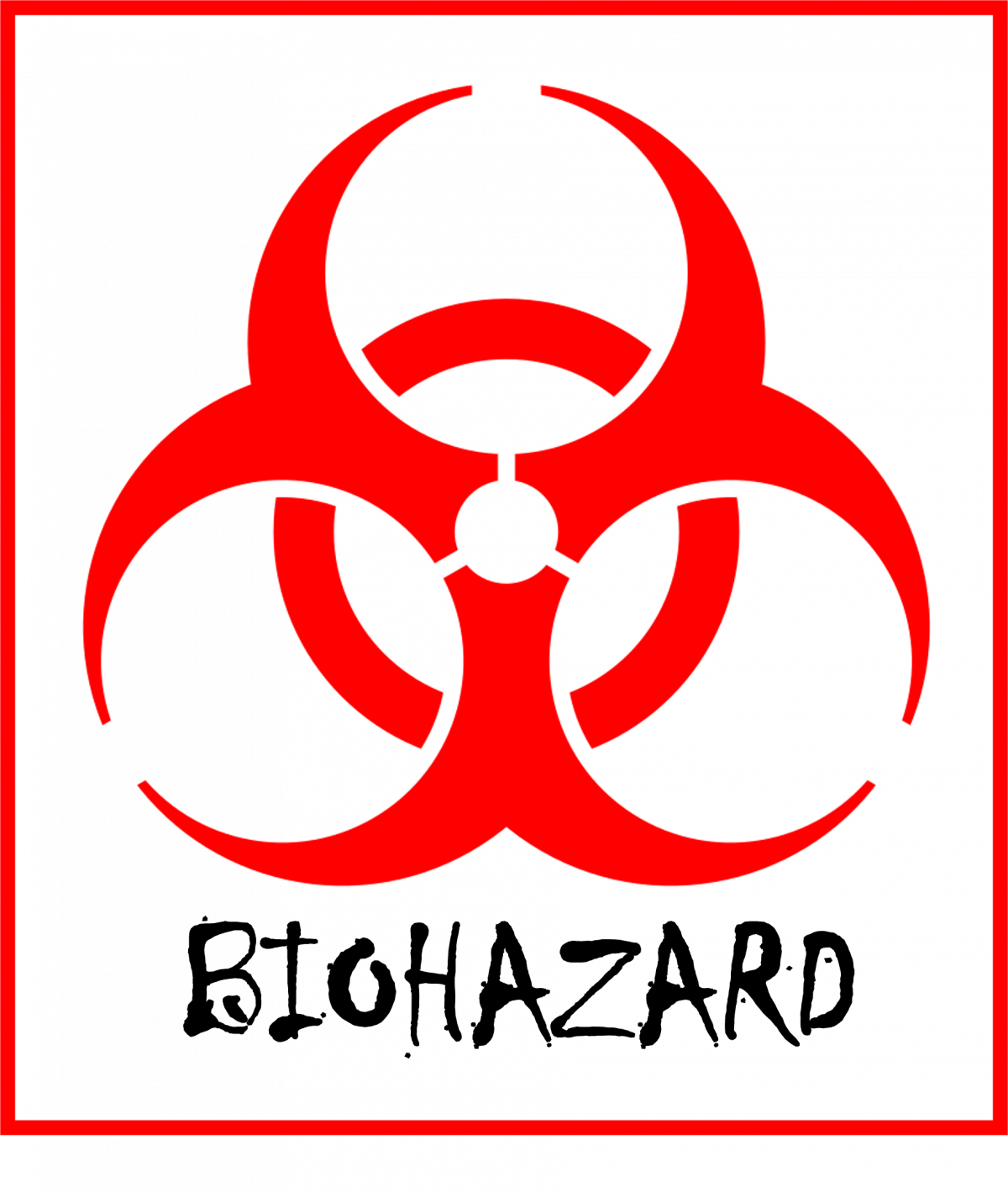 Biohazards are biological substances that can be dangerous to others. The biohazard symbol was carefully developed in the 1960s to provide an easy-to-use and understood means to warn others.  Biohazard symbols bring to mind “danger!,” people and places associated with biohazards, and have been used for HIV/AIDS awareness.

The Centers for Disease and Control Prevention define a biohazard as “infectious agents or hazardous biologic materials that present a risk or potential risk to the health of humans, animals, or the environment.”  They cite bacteria, fungi, and other toxins like venom.

The Need For A Universal Biohazard Symbol

The items not only can be very dangerous but invisibly so.  A person might come upon them accidentally, including in forms that are not readily apparent by our senses such as tiny microbes.  A warning sign is therefore of particular importance.

There have always been various symbols to warn people of danger.  A familiar one is the skull and crossbones symbol, which can mean “poison.” The symbol is not only catchy but is understandable for those who are not literate or able to understand the local language.

By the 1960s, there were many symbols for various types of hazards of those doing government research and doing a range of jobs where dangers were often the name of the game.  One list of occupations that might regularly come into contact with biohazards includes:

Charles L. Baldwin of Dow Chemical and Robert S. Runkle of the National Institutes of Health argued that it was time for a universal biohazard symbol.

The creation of the symbol was basically a mass marketing campaign, akin to something like the creation of Mr. Peanut (Planters).  A range of potential symbols was tested on selected groups of people across the country to see which one was the most agreeable and most memorable.

The symbol had to be easily recognized and quickly recalled while not confused with other things.  Driving on the “right side” of the road means different things in the United States and the United Kingdom.   The symbol also had to be easy to use, including on objects that might change directions.  An “up arrow” will not do much good when the box it is on is turned around.

The resulting biohazard symbol met all the tests.  It had a bright orange color to stand out in front of one’s eyes, was three-sided and perfectly symmetrical to avoid confusion if looked at from different angles, and had a dominating picture to attract one’s attention.

The overall nature of the symbol also had a basic familiarity.  It is a type of triquetra, a fancy term for three interlocking arcs.  A form of this symbol is an ancient symbol of friendship.  The three-part symbol also looks something like a radiation warning but not enough to confuse you.

The symbol was a great success.  It became a standard sign for biohazards nationwide and benefited not only research institutions and chemical corporations but people across the board.

When you see a biohazard symbol in a restroom, it might be a red flag that it is a disposable bin for insulin needles.  If you see the symbol, be careful, and be sure not to touch the items inside.

Baldwin was once annoyed when a biohazard presentation included a gift for participants: a nice tie with a biohazard symbol.  The seminar director thought they were being creative.

Baldwin thought this was a misuse of a symbol that was meant to be used only to warn people of the presence of biohazards. Otherwise, the value of the biohazard symbol might be watered down with people thinking it can mean a number of things.

Baldwin was being a tad bit of a spoilsport here while still having a point.  The biohazard symbol brings an immediate emotional reaction: “danger nearby!”  Like the boy who cries “wolf,” if the symbol was used humorously or in a trivial way, it can start to lose its value as a safety device.

A biohazard tattoo can be used to bring to mind such things. One specific reason people have used them is as a way to tell people they have HIV or the AIDS virus.  It was not usually meant to say “I am dangerous,” but as a sort of ironic way to promote awareness.

The ancient taboos about handling blood show us that the dangers of biohazards have always been with us.  But, the need for such a symbol is much greater in the modern world, including with science and technology providing so many more options.

It is fitting that the biohazard symbol was crafted using modern-day marketing techniques.