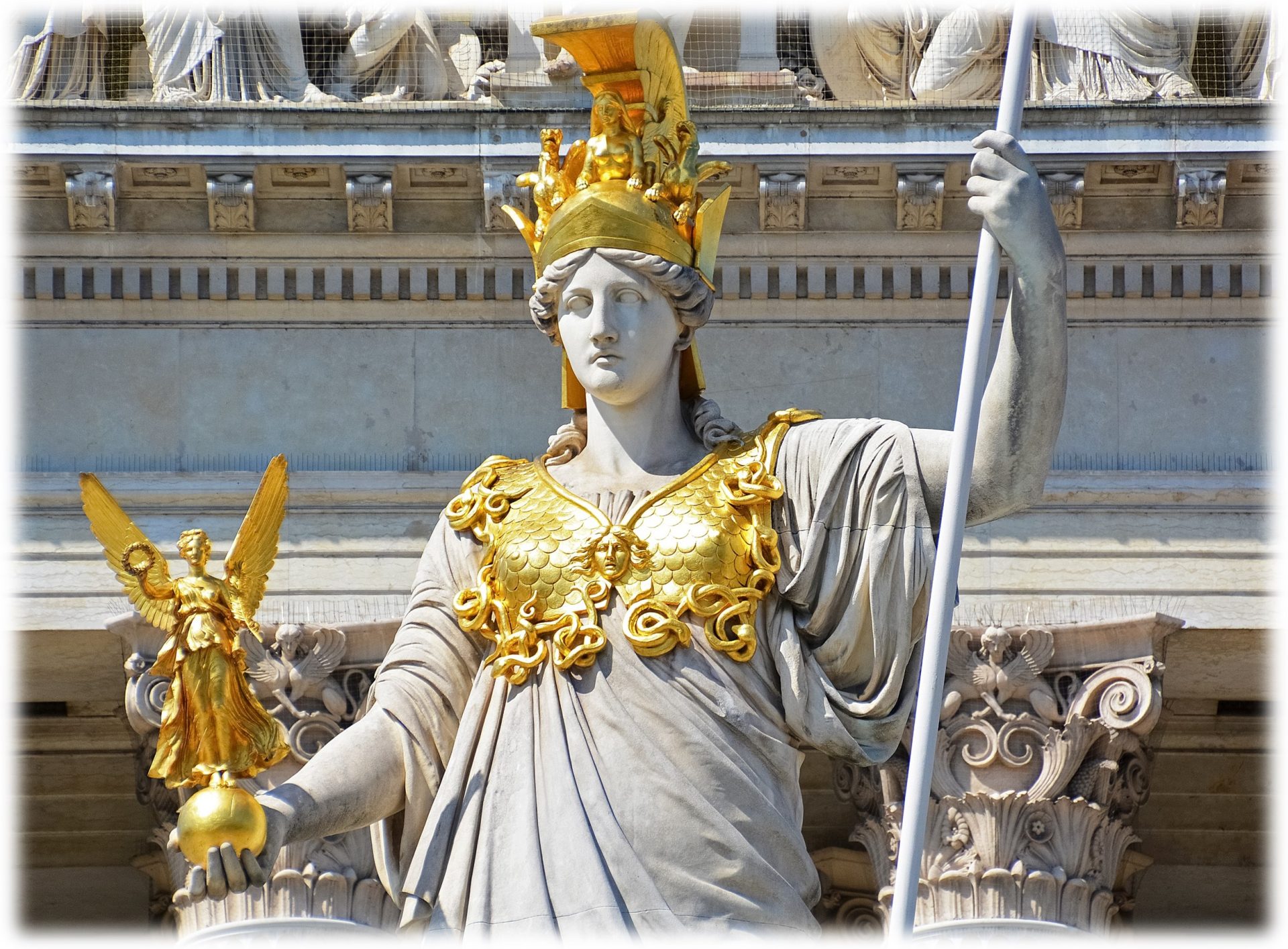 Athena was one of the twelve gods of Olympus in Ancient Greece. She was the daughter of Zeus, the leader of the gods. Athena was the patron of Athens. She also was the goddess of wisdom, civilized war, courage, and crafts. The owl is Athena’s most familiar symbol. Other symbols of Athena are snakes, her armor, helmet, shield, and olive trees.

The roots of modern western culture can be found in Ancient Greece, including government, philosophy, science, and literature. The Olympics, which started as an athletic competition between Greek city-states, is still held (now with nations worldwide) today.

The city of Athens played an important role in Ancient Greek history and was the home of such greats as the philosopher Socrates.  The goddess Athena was the city’s patron goddess though there is some debate over what name (Athens/Athena) came first.

The Romans eventually adopted Athena into their mythology and named her “Minerva.”

Athena was one of the Twelve Olympians, the leaders of the gods, and the top god (Zeus) was her father.  One myth says that she was born out of the forehead of Zeus though some versions have him swallowing her mother (Metis) first.

Metis was pregnant at the time, leading Zeus to have some headache when she was ready to give birth.

Athena’s birth, and lack of a mother figure, probably influenced her personality.  In one famous scene in a tragic play, she provides the tiebreaking vote in a trial for matricide:

For there is no mother who gave birth to me

and I glorify all things male, except for marriage,

with my whole spirit, and I am completely my father’s.

Athena votes to acquit.  Athena, as one expert on the classics explains, was not exactly an early feminist.  The city of Athens, after all, was ruled by men.  Men who were pretty sexist.

Ancient peoples often had their own local gods, believed to have a special concern for their people and lands. For instance, the Jews believed the god they eventually called “Yahweh” protected them personally.  Gods also were believed to have certain powers and skills.

Athena was particularly honored for her wisdom.

Her wisdom was expressed in many ways, including inventing many useful items like the ship, chariot, and plow.  Athena also invented weaving. She was a patron of many crafts.

Athena was also wise in battle, giving soldiers both courage and wisdom.

She was also very beautiful.  The great Trojan War supposedly arose from a dispute between three goddesses, when an apple was left “for the fairest” of them all.  Like Snow White could tell you, that can cause trouble.  Athena, however, never married.

The most common symbol of Athena is the owl.

Ancient Greeks were impressed by the “wise owl,” a skillful nocturnal hunter.  Owls have large distinctive eyes, which people believed made them able to “see all.”

Athena was known for her wisdom so it was only logical that her personal animal companion would be the owl.  She is often pictured with an owl and an owl represented Athena herself.

A common name given to Athena was Glaukopis, or “Bright-Eyed,” which shares a root with the Greek word for owl.  Athens adopted the bird too and put it on their coins (“little owls”).

In the movie Clash of the Titans, Athena is so attached to her owl that she refused to let Perseus borrow him.  Zeus commanded her to do so, but she had a mechanical owl built instead.

The great hero Perseus on one of his adventures slew the monster Medusa, who turned anyone who looked at her into stone and had snakes in her hair.  Athena helped him out.

Athena is often shown wearing a special amulet or holding a cloak or shield portraying Medusa’s head known as a “Gorgoneion.”  Medusa was one of three Gorgon sisters.

Athena is often pictured with snakes on the edges of her clothing. Snakes supposedly protected her temple in Athens.  The defeat of Medusa is one explanation for why she was so snake happy.

(Medusa is a rather interesting character.  You can learn more about her here.)

Snakes were not only symbols of danger or the ability of Athena to guard against it.  Snakes also were associated with fertility and rebirth because of how snakes shed their skin.

Athena’s relationship with snakes suggests an earlier role as a fertility goddess.

Athena was often portrayed in stories and pictures as a warrior goddess.

Athena’s helmet and spear represent her military skills and courage. Soldiers in battle and many great heroes were protected by and inspired by the great Athena.

Athena’s shield represented her power as well as her role as a protector. The shield is sometimes emblazoned with the head of Medusa, a scary image for any foe to see!

The olive tree was very important to the ancient Mediterranean World.  Olives was not only a source of food.  Olives had a lot of symbolic meanings, including olive wreaths.

Different gods gave the city of Athens a gift.  One god gave them a horse. Athena gave them an olive tree.  Athens thought this was so valuable that they made her their patron goddess.

Olive trees became a symbol of both Athens and Athena.

Athena had many attributes. This might be because myths about her involved a range of goddesses, which in time were combined into one.  Athena had beauty, wisdom, military prowess, and craft skills.  This is reflected in the many symbols associated with Athena.