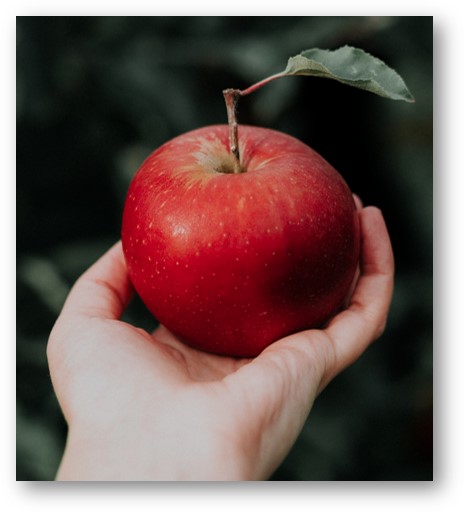 Apples are not only full of nutrition. They are full of symbolism. Apples supposedly tempted the first man and woman to sin.  Apples became symbols of being American (what is more American than apple pie?) and New York City (“the Big Apple”).  You should give one to your teacher.  A teacher who better not catch you listening to Apple music.

You probably know the story, one many people believe actually happened. The serpent tempted Eve to disobey God, who told Adam and Eve not to eat the fruit from a certain tree.

Eve tempted Adam. And, the rest, as they say, is human history.  No longer life in paradise.

A “forbidden fruit” is something that is very tempting while being bad for you.  The original forbidden fruit was not always believed to be an apple.

The original reason “apple” was used is that when the Bible was translated into Latin, “evil” and “apple” was the same word.

The Latin translator, therefore, was using a pun, which the Bible turns out to be full of when you look at things closely.  The Bible’s writers loved puns, including when they named things.

When is An Apple Not an Apple?

“Apple” also was originally a generic name for many different kinds of fruits.  In time, “apple” was the name of a specific fruit.

So, today, the original forbidden fruit is associated with the apple. The cover of No Adam in Eden, for instance, shows a woman holding a bitten apple.

[The book was written by the author of the much more well-known book Peyton Place. I liked both, and my copy of No Adam in Eden has that cover.]

When Adam and Eve sinned, they suddenly were ashamed of their nakedness.  This has very sexual connotations.  Apples can also symbolize temptations of all kinds.

Why Is It Called An Adam’s Apple?

The bump on your throat is your larynx or voice box.  It is protected by flexible tissue known as “cartilage.”  The cartilage that protects the voice box is known as the “Adam’s apple.”

The story goes that Adam ate that apple and a piece got caught in his throat.  And, since normally (but not always) men have a much more noticeable Adam’s apple, it is associated with men.  So, that is why it is not called an “Eve’s apple.”

Apples are familiar things to children.  They have apple slices, apple juice boxes, and applesauce.  And, apples were and still often are familiar to them from bible stories.  So, when children learn their alphabet, it would make sense that “A is for apple.”

Apples are also traditional gifts for teachers.  Teachers often were not paid that well. Certain things were provided to them to help stretch their salaries.  Apples were an abundant crop, so even not so well off parents could provide them. Teachers got apples by the bushel and could use them to make various things from juice to pies to apple-flavored liquor.

A student who was an “apple polisher” tried so hard to please the teacher and to show how special they (the student) were, they polished the teacher’s apples.  The term became a general term for a suck-up in and out of the classroom.

As American As Apple Pie

The expression “as American as Apple pie” is used to describe something particularly associated with America and/or expressing its values.

It is generally used in a wholesome way though some people apply it in a critical way. The term “apple-cheeked” also means “wholesome.”  The term arises from having rosy cheeks like a child.

We saw how the abundance and multiple uses of apples made them a good gift for teachers.  They became symbols of healthy living (“an apple a day keeps the doctor away”) though they also could be used for various types of intoxicating liquor (such as applejack).

A basic symbol of traditional American culture became apple related activities such as apple picking and baking apple pies.  The apple as a whole became a symbol of the United States.

Why is New York City Called the “Big Apple”?

Apples became a symbol of good things in general.  A “big apple” would be a special thing, a great success.  The term also eventually became a nickname for that great city, New York City.

The term “big apple” was a racing term.  Horses like to eat apples.  A championship horse would be a “big apple.” A sportswriter extolled the race tracks of my native city:

“The Big Apple. The dream of every lad that ever threw a leg over a thoroughbred and the goal of all horsemen. There’s only one Big Apple. That’s New York.”

The term became particularly popular in the Jazz Age in the 1920s.  Later on, whenever the Mets baseball team hit a home run, a big apple rose up in celebration.

Apple Computer Company was founded in 1976.  Apple computers became a standard brand.  And, an apple with a bite taken out of it became one of the most famous brand logos.

It is important for a company or product to have a good logo. A logo (from “logogram” or “word sign”) is a symbol or graphic that represents something.

Steve Jobs, one of the company’s founders, said its name was inspired by his visit to an apple farm.  Jobs thought the name “Apple” was “fun, spirited and not intimidating.”

Apples were already symbols of wholesomeness and America itself. Why not have it as the brand of America’s computer?  The company took this idea and ran with it.

Their personal computer brand was named “Macintosh” (or Mac) after a type of apple. The company logo became a generic symbol of computers.

And, the logo continues, including for its Apple Music streaming service.

Apples are so familiar that they are often used to stand for basic things.  We saw how “apple” was a generic term for fruit.

The saying “comparing apples to oranges” (comparing different things as if they were the same) is another example of “apple” used to stand for many things.

This has made the apple a popular symbol, even if Adam and Eve did not really (they didn’t leave any accounts I know of to tell us) actually eat any apples themselves.