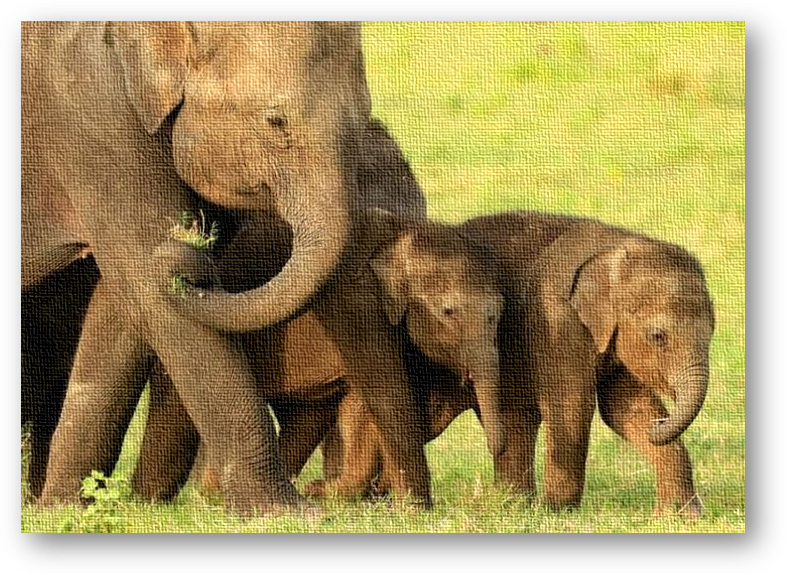 Animals symbolize a lot of things including strength. Strength can come in various forms, including raw power, endurance, and wise authority. Many different animals symbolize strength from ants to wolves. They do so in different ways, showing the variety of animal symbolism available even when only one character trait is involved.

Ants are capable of carrying more than 10 times their weight.  Imagine someone about 150lb, who could carry over 1500lbs.  That is rather strong.

Ants are symbols of being stronger than you look.  Ants are symbols of having the strength to do what you have to do (ants carry food back to their nests, as seen in those Tom and Jerry cartoons).   Dung beetles are also very strong.  But, ants are a bit less icky.

There is a viral video of a woman crying out at a bear attacking her kayak.  This is just one of many stories of bears, including the ones Goldilocks met, where their strength is at issue.

Bears are big, hairy animals, who are strong and scary looking.  Grizzly bears are particularly associated with strength.

Yogi Bear is nice.  Grizzly bears, you want to stay away from.

Polar bears might be as strong but are more associated with cold weather and the North Pole.  Still, for those people like the Inuit, polar bears are also symbols of strength.

Texans are quite familiar with longhorn cattle, which are full of symbolism.

Bulls are intact (not castrated) adult male cattle.  They are a common symbol of a strong, brawny sort of person usually a man or someone with masculine habits.

A person who is very upset and is lashing out violently might be compared to a “bull in a china shop.”   Bulls are often not just symbolically strong; they are strong and uncontrollable.

Game of Thrones was for a long time a prime “watercooler show.”  And, there were dragons.  Dragons, usually portrayed as huge, flying, fire-breathing reptiles, are found all over in our stories from Bel and the Dragon in some versions of the Bible to Shrek movies.

Dragons are popular fictional symbols of strength and authority.  They are often symbols of powerful evil forces.  The story of Saint George slaying the dragon is a case of old stories being translated into a Christian myth of good defeating evil.

The bald eagle is our national bird, symbolizing authority, bravery, and the American West.  Eagles are symbols of strength and power. They have very strong beaks and claws, which can catch and crush large prey very quickly.  Eagles can swoop in and show who is boss.

Eagles, like lions, have strength mixed in with a lot more.

Elephant symbolism runs the gamut from having a long memory to selling off trinkets you no longer want. These majestic animals have come to personify intelligence, danger, and the Republican Party in America.  Elephants have so much symbolism, they deserve their own page.

Elephants also represent protection and strength.  Elephants are the largest land animals living today.  They were once used as a type of living tank, an old saying being that the first taste of battle is “seeing the elephant.”  The trumpet sound of an elephant is a sign of authority and war.

Elephants are sacred animals in India.  They are sacred not just for Hindus, but Buddhists and Jainists as well.  They are honored for their strength, wisdom, and as bringers of good fortune.

Gorillas are the largest of the “Great Apes,” primates which include you and me.

Gorillas can be four to six feet tall, over four hundred pounds, and are stocky animals with broad chests and shoulders.  They are very scary looking, even though they are gentle giants.  Gorillas usually let their looks do the talking.  No one is going to mess with them!

Gorillas symbolize strength that we use only when we have to do so.  Gorillas are like a country with a very big, scary-looking military, which is only used when they really have to do so.

Horses are both early domesticated animals and ones to whom humans developed a close personal attachment.  They have a lot of symbolism, including friendship and adventure.

Horses also symbolize endurance and strength as seen by the terms “horsepower” and “workhorse.”  Horses not only can carry humans. They can do so in the middle of a battle while dragging along a chariot.  And, they can pull a plow in the fields as well.

Horses are noble animals, honored for many things.  Strength included.

Parents with young children as well as those who like the musical will be very familiar with the “king of the jungle,” the lion king.  Lions are dubbed kings of the jungle because of their power and strength.  Plus, they are so majestic looking and have that loud roar.

Lions symbolize a complex type of strength, which includes courage, wisdom, and spiritual power as well.  A bull has raw strength.  A lion has strength and authority.  The wisdom of lions is suggested by the Aslan character in The Chronicles of Narnia stories.

A ram is a male sheep.  A Ram is a member of an NFL football team.

“Sheep” is commonly a negative term for someone who just goes along without resistance.  Rams have a different reputation.  For instance, one type of ram is described this way:

Rams are male bighorn sheep, animals that live in the mountains and often settle arguments with fights that include ramming their heads into others.

Sounds like a true “battering ram.”  Rams with their horns, fighting ability, and the fact they can be hundreds of pounds, are prime symbols of strength.

Dogs are domesticated descendants of wolves.  Wolves have a lot of symbolic meanings as well, often negative in nature.

The prime example is the “Big Bad Wolf” of Red Riding Hood fame – a dangerous predator.   In the wild, wolves are usually found in packs, not “lone wolves.”

Wolves are hunters with the strength, claws, and teeth to make for a dangerous foe. Wolves are wild symbols of strength.  Wolves show that strength often works best when used as a unit. A single person can be quite strong, but still able to be defeated.  If multiple strong people combine their strengths, victory is much more likely.

The different types of strength are shown by the first and last animals on this list.  Ants and wolves both symbolize strength.  They do so in very different ways.  That is the charm of symbolism.  There are so many options, each useful for a special occasion.