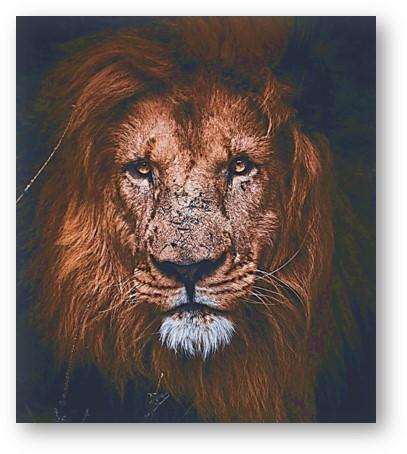 Ancient times were not a time of equality. Certain people had more power than others. There were various symbols of power, many of which are still with us today. These symbols included animals, items such as scepters, and natural events such as lightning.

The prophet Daniel in the Bible had a terrifying dream that was filled with animal imagery, which turns out to be a symbolic summary of the various powers and empires of the day.

Animals have many qualities that make them rich subjects for symbolism.  Certain animals were used by ancient cultures as symbols of power.  The examples are not too surprising and include such animals as lions, bears, dragons (a favorite of Asian cultures), and leopards.

Animal horns also were symbols of power, including in the Bible. A ram might battle another ram with its mighty horn.  The horn became a symbol of power for humans as well.

Horses also were a sign of power.  Horses were used for military purposes, including pulling war chariots.  They were also a sign of wealth and prestige.

Arrows have been around since pre-historical times.  They were used for hunting and warfare.  Arrows and arrowheads, the tips of arrows, became important symbols of power.

Arrowheads were important to Native Americans.  They were symbols of both political and religious power.  They could be used as talismans to protect you from danger.

There are various “power plays” that we can make that show others who is boss.  One ancient approach is to make sure the other person was in a submissive position.

A basic way people expressed their acceptance of the power of another was by kneeling.  Kneeling symbolizes that you are lower in prestige than the person.  You are putting yourself at the mercy of another person.  They have a greater ability, if they want, to harm you.

Kneeling was a way to show how others, including supernatural beings, have more power.  Bowing our heads is another related way of expressing the same idea.

Ancient Rome learned a lot from the Etruscans, who governed a kingdom in Northern Italy.

Various symbols later used by the Roman government were adopted from Etruscans, including a ceremonial chair, symbolic clothing worn by leaders, and the “fasces” (bundle of sticks) symbol of power that later gave the name to “fascism.”

Fascism is now defined as a dangerous system of government that is a threat to civil liberties.  The “fasces,” however was an ancient symbol of power with a lot less baggage.

The word “insignia” is a fancy term that means a badge of authority.

We use various insignia today, including a police badge or stripes on a uniform, to show that a person has some sort of special authority.  This originated in ancient times.

Clothing also could be a badge of authority.  The Roman toga became a symbol of a public official.  In Mesopotamia, kings, soldiers, and sometimes scribes also wore colorful outfits.

Bodies themselves might be signs of power.  Body art, including tattoos and body painting, was often used as a symbol of one’s power and authority.  Men who went into battle would use such things to warn others that they had special power.  “Do not mess with me!”

Ancient peoples were often at the mercy of nature.  Nature often provided symbols of power, including the heat of the sun, water that might result in floods, and fire.

The king of the Greek gods, Zeus, was known for his thunderbolts, or lightning strikes.  They were his fearful weapon, including used as a punishment.  Lightning was part of one of the ten plagues of Egypt.  Poseidon, the god of the sea, also could control the waters to show his power.

LEARN MORE ABOUT THE SYMBOLISM OF NATURE

The rod of Asclepius is an ancient Greek symbol that has become an internationally recognized symbol of medicine. It consists of a snake [worm?] slithering around a wooden stick.

The rod was a callback to staff, a big wooden stick that was a common source of power in ancient times.  Moses, for instance, had a mighty staff that he lifted up to show his power.  Shepherds used them to control sheep.  They also symbolized the control of people.

A scepter (or sceptre) is basically a fancy staff.  It often was very fancy and ornamental.  Specters became common symbols of authority, including for kings, in the Middle East both in Ancient Egypt and Mesopotamia.   Talk softly and with a big stick!

Power and authority is often a tricky thing.  How do you show others that a person or institution has special control that others do not have?  Symbols provide a helpful way to do this.

Ancient symbols of power provided a means to show others, especially strangers, that you had authority.  They showed that a person and institution deserved special respect.

Symbols might be a way to enforce authority, including requiring defeated foes or visiting subjects to bow in front of you.  They helped to keep the peace in the process.