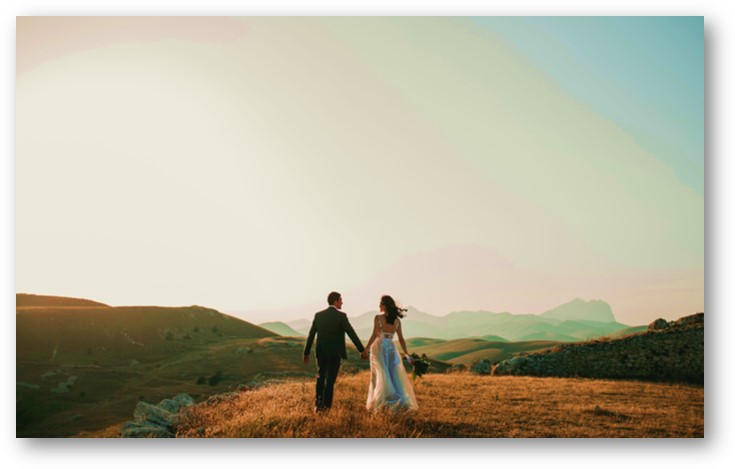 Adam and Eve might not have had a wedding ceremony.

Anthropologists, those who study human culture, still believe marriages go back beyond the start of written history.  Marriages became more important societal events when we began to settle down into cities.  The first reported evidence of marriage might be as late as 2350 BCE.

The expression “tying the knot” means getting married.  It arises from an ancient ritual of tying knots of cloth to bind the couple being married.  The Celtic tradition, known as “handfasting,” might go back as far back as 7000 BCE.

The couple was now bound forever. As the traditional wedding ceremony says, “let not man put asunder” those so bound.  Starting as a pagan ritual, it was later used by Christians as well.

Wedding rings are also ancient, used by the Egyptians, Greeks, and Romans. The ring is a natural symbol of eternal union.  It is a closed unbreakable loop that never ends.

Why Do We Toss Rice At Weddings?

Rice is tossed at weddings to wish the married couple prosperity and a fruitful union.

Why rice?  What do you do with rice?  You put a cup of it in a pot and it grows into a dish to feed the whole family.  Rice symbolizes fertility. Seeds and crops are things that grow.

Ancient Celts (them again!) used rice to appease spirits and ask for blessing and fertility for the couple.  Romans used wheat.  Sometimes other grains like oat were used.

The message was the same.  The couple was symbolically showered as a blessing and we continue to do so today.  And, then the birds can eat the rice.  Don’t worry.  It’s safe.

LEARN ABOUT THE SYMBOLISM OF PIGEONS AND DOVES

Marriages have always been times for families to come together and that meant a big feast.  The expenditure shows the importance of the ceremony and the responsibilities each side brings to the marriage.  From Ancient Greek and Roman times, this included a wedding cake.

Different types of cakes were used as ancient offerings to the gods.  These sacred cakes might have been the origins of wedding cakes.

In Ancient Rome, marriage ceremonies ended with scone-like wheat or barley cake being broken over the bride’s head for luck and fertility.  The couple would then eat a bit of the cake (like couples still do) as a sign of being married.

White was an ancient symbol of purity such as a reference in the Bible of “fine linen, clean and white” (Rev. 19.8) robes of saints.  But, a white wedding dress was not a standard for weddings until later in history.

Ancient China had an early form of wedding dress, but it was not white.  Both brides and grooms wore ceremonial outfits for their weddings during the Zhou Dynasty in China (starting about 1046 B.C.E.). They wore black robes that were trimmed in red.

Many plants, flowers, trees, and so on played a role in ancient weddings.  They were both used for decoration and for symbolic reasons.  Olive branches, for instance, symbolized peace, prosperity, and celebrations.  Olive wreaths were also worn at weddings.

What about the wedding bouquet?  In Ancient Greece, a bride would carry a bouquet of herbs and spices to ward off evil spirits that might want to curse her on her big day.

They also symbolized a new beginning and brought hopes of fertility, happiness, and fidelity.  And, to be practical, they smelled good and covered up body odor.

Alexander the Great fell in love with Roxanne, a great beauty from a foreign land.

Alexander’s generals did not want him to marry a foreigner.  But, he was the boss.  The ancient wedding ceremony of the region involved breaking bread together. A loaf of bread was split with a sword and given to the bride and bridegroom to taste it.

Bread is a basic meal and “breaking bread together” is an ancient symbol of coming together.  We see this in the breaking of bread as part of the first Christian meals.

Alexander and Roxanne symbolically showed everyone they were now united as a couple.

Weddings were parts of Ancient Jewish life and the Bible has various references to marriage ceremonies and symbolism.

In order to marry a girl, a man would give her father a gift (called mohar in Hebrew) that would seal the betrothal between the bride- and husband-to-be.

The gospels speak of a special “wedding garment” that the couple should wear.  At the end of the wedding feast, the groom symbolically wrapped his cloak around the bride (Ezek. 16.8).

The bride also wore a wedding veil, modesty warranted only close family members should see her face.  The lifting of the veil by the husband symbolized their union.

The great patriarch Jacob only realized on his wedding night that he actually married the older sister of his intended bride!

Weddings are one of the many ancient human traditions that continue today. Wedding symbols often turn out to have quite ancient origins, even if we used them slightly differently today.

The popularity of dragon-related television programs these days leads me to include one more such symbol.  Dragons are an important part of modern Chinese weddings.

Dragons signify wealth and strength for the groom while the phoenix represents the bride, signifying grace and renewal of life.

This arises from ancient traditions in which the dragon was a symbol of the Chinese Emperor, and the phoenix symbolized the Empress of China.

The dragon and the phoenix together symbolize an ideal match, a type of “yin and yang” balance of the sexes.  Together, they promise a life of happiness.  Well, sometimes!