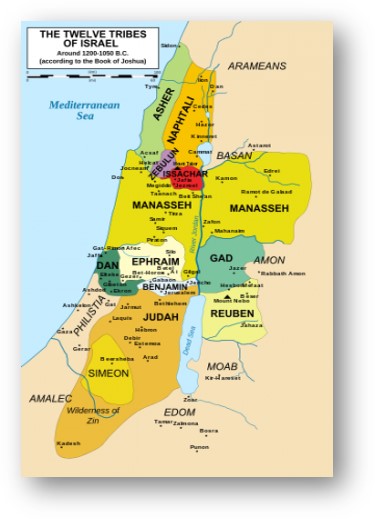 Israel had twelve tribes.  Each tribe has a flag with a symbol related to their ancestor.  Each tribe also has a personal gemstone.  The Jewish high priest wore a breastplate with twelve stones, one for each tribe, with the colors of each stone matching the colors on the tribal flags.  The twelve tribes as a whole symbolize the nation of Israel.

The Bible discusses the origins of the Jewish people in the book of Genesis.

Jacob wrestles with a man all night long.  The man turns out to be an angel of God. Jacob is renamed “Israel” (struggle with God).  Jacob is blessed and will be a father (patriarch) of a great people.  The tribes of Israel will descend from his twelve sons.

Each son is given a portion of the land of Israel. Levi’s tribe will be priests and not have a portion like the others. “Twelve” is a symbolic number of completeness (for example, twelve months in a year).  So, to keep things even, Joseph’s two sons each obtain a tribal portion.

The Twelve Tribes of Israel

So, depending on how you count, there are twelve or thirteen tribes of Israel:

“12 tribes” remains the basic symbol of Israel, so twelve is the number usually cited.

Before Jacob died, he blessed each one of his sons.  We learn things connected to each one of the tribes of Israel.  Tribal symbolism starts to clearly come into play here.

Joseph eventually moved up in the world, obtaining a leading role in Egypt. The Israelites all move there, but in time, the new Egyptian leaders forget about all Joseph did to help out.  So, Moses has to lead his people out of Egypt.  This is covered by books two to five in the Bible.

At one point (Numbers 2:2), we are told: “The Israelites are to camp around the tent of meeting some distance from it, each of them under their standard and holding the banners of their family.”

Each tribe had a flag, each with a symbol.  The Bible loves symbolism.

The Jewish Midrash (textual analysis) notes that the breastplate of the Jewish high priest had twelve stones, one for each tribe, and the colors of the stones match the flag colors.

Judah became the leader of the tribes.  His symbol is the lion, the leadership role familiar there to any fans of The Lion King.  His stone is the nofech.  “Nofech” is one of those words in the Jewish scriptures for which we do not quite know the exact translation.  The color of this stone is somewhat debated, but the general consensus is that it is blue like the sky.

Reuben was the oldest brother but was a troublesome sort, so did not become the leader of the tribes.  His stone is ruby (red) and his symbol is mandrakes (a plant). Mandrakes were connected to fertility in ancient times and his mother used them to try to get pregnant.

Jacob mentions that Simeon’s sword is a weapon of violence. Simeon had a reputation for violence, including his brutal revenge when men from the city of Shechem raped his sister.  Readers of Genesis will learn there is some “parental advisory” content starting with Adam and Eve being nude.  Shechem is represented on Simeon’s flag.   His stone is topaz (green).

Levi’s stone is bareqet, which might be an emerald or onyx.  His flag has white, black, and red stripes. His symbol is the priestly breastplate, particularly the Urim and Thummim, two stones used as a means to determine the divine will.  A sort of Jewish oracle bones, perhaps.

Jacob said that “Zebulon shall dwell by the seashore.” And, his symbol is a ship, matching the prediction that his tribe would be seafarers.  His flag was white and his stone was a diamond.

Jacob compares Issachar to a donkey, a beast of burden.  But, later in the Bible, Issachar is praised for his knowledge of astronomy and calendars.  His flag symbolizes this, having an image of the sun and moon.  Issachar’s stone is a sapphire, and his flag is dark blue.

Jacob said Dan will be like a snake, a viper that bites those that pass him by. Dan’s tribe would eventually turn against God.  Dan is represented by a snake. Dan’s stone is leshem, amber, with a flag of a sapphire-like (shade of blue) color.

Jacob predicted Gad would be a tough military man. His flag had a picture of a military camp.  Gad’s flag is a mixture of white and black.  His stone is a black agate or obsidian.

Jacob predicted that Asher’s tribe would enjoy rich foods fit for a king. And, his tribal area was full of olive trees.  His symbol is an olive tree.  Asher’s stone is tarshish, described as the color of expensive stones worn by rich women.  It is unclear what exactly this means color-wise.

Jacob compares Naphtali to a swift deer (or gazelle) with beautiful fawns. And, sure enough, a deer is on the flag.  Naphtali’s stone is purple amethyst, described as the color of diluted wine. Amethyst means “non-intoxicating,” and in ancient times was believed to be a way to not get drunk.  Have a drink of wine from a goblet made from amethyst, and you would remain sober.

Jacob spoke of Joseph as having the most “fruitful tree,” and as the leader of his brothers, who earlier abandoned him.  Joseph’s flag has two sheaves of grain, representing both Egypt and his two sons, who were both born in Egypt.  Joseph’s flag is very black and his stone is called shoham, which might be malachite (green and black stone).

There are also separate flags for Joseph’s sons, Ephraim and Manasseh.  Ephraim is symbolized as a bull and his brother is a wild ox.  These symbols arise from Moses’ blessing to their tribes (Deuteronomy 33:17).  They have the same color and stone as Joseph.

Benjamin was Jacob’s youngest and most precious son after Joseph went to Egypt.  Benjamin might be a small tribe, but it was like a “ravenous wolf.”  The first king of Israel (Saul) came from the tribe of Benjamin.  Benjamin’s symbol was a wolf.  His stone was yashpe, another one we are not sure about.  His flag was a mixture of colors.